For Wilson, Every Game Is An Escape Act

Russell Wilson has 41 rushing attempts in Seattle’s last four games, a remarkable and dangerous total. His 8.3 rushes per game lead all NFL quarterbacks. 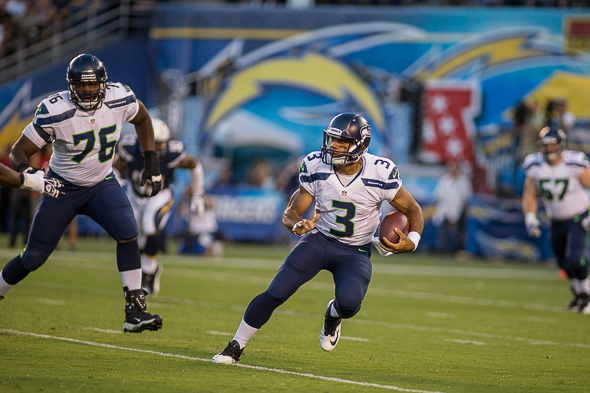 Russell Wilson is averaging 8.3 rushing attempts per game, the highest total in the NFL among quarterbacks. / Drew McKenzie, Sportspress Northwest

It’s difficult to find fault with a football team averaging 27.3 points and allowing 16.6 with a scoring differential of +75, especially one missing its starting tackles, Russell Okung and Breno Giacomini. But if that’s the overriding plus with the Seahawks, who take their impressive act to St. Louis Monday night to face the Rams, the minus is that Russell Wilson is getting hit way too much.

By one count, the Arizona Cardinals sacked or dinged Wilson 19 times last Thursday. In Houston Sept. 29, the Texans lit into Wilson 16 times in 34 drop-backs. He’s already been sacked 20 times, 13 shy of his 33 total as a rookie, fourth-highest total in the NFL and the highest total for a quarterback on a division-leading team.

Wilson is on pace to get sacked 46 times, which would rank as the second-most takedowns of a Seattle quarterback in franchise annals, behind Dave Krieg’s 52 in 1985. Dumped, hit or hurried an average of more than 10 times per game, Wilson is fortunate to be blessed with such remarkable escapability. Others haven’t been so lucky.

(Through the season’s first seven weeks, 51 quarterbacks threw at least one pass. Ten starters sustained injuries that cost them at least one game, and three others were benched, including Cleveland’s Brandon Weeden twice. Three third-string quarterbacks have already played and a No. 4 — Buffalo’s Thad Lewis — made two starts.)

When I see a quarterback run as much as Wilson – 41 times in his last four games – I see trouble lurking, even though it’s a kick to watch him exhaust defenses with his legs. We know why he’s running, but it’s the volume of runs, leaving him exposed, that causes concern.

According to Pro Football Focus, Wilson not only leads the NFL with 29 scrambles after dropping back to pass (Drew Brees has scrambled six times), a league-leading 46.6 percent of Wilson’s passes have come under pressure (Peyton Manning 21.7 percent).

Let’s put those 41 rushes in the past four games – 10 at Houston, 13 at Indianapolis, 10 vs. Tennessee, eight at Arizona – in perspective. Wilson’s previous high in any four-game stretch was 30, from Nov. 4 through Dec. 2, 2012, when he ran nine times vs. Minnesota, seven vs. the Jets, five at Miami and nine at Chicago.

The contest against the Rams Monday begins a favorable four-game run against opponents who are a combined 5-16. Then comes Seattle’s bye. While the run includes road trips to St. Louis and Atlanta, it’s not unrealistic to envision the Seahawks at 10-1 or 9-2 by the time of their highly anticipated Week 13 matchup at CenturyLink against New Orleans – unless Wilson gets clocked.

But that doesn’t begin to illustrate just how much Wilson is running the ball. Since the 1970 NFL-AFL merger, only three quarterbacks have averaged more rushing attempts per game than Wilson this season (RPG=Rushes Per Game).

If Wilson maintains his present pace, he will rush for 738 yards, 249 more than the 489 he posted as a rookie. That would give Wilson the seventh-highest, single-season rushing total by a quarterback in modern (since 1970) NFL history, a mark surpassed only by Vick (three times), Douglas (1972), Cunningham (1990) and Newton (2012).

I can’t help but think that the Seahawks, if they had their druthers, which they don’t, would prefer Wilson not show up anywhere on this list.