Seahawks to get benefit of NFL’s QB churn

In the next four weeks the Seahawks face three teams — St. Louis, Tampa Bay and Minnesota — dealing with a shortage of competent quarterbacks. 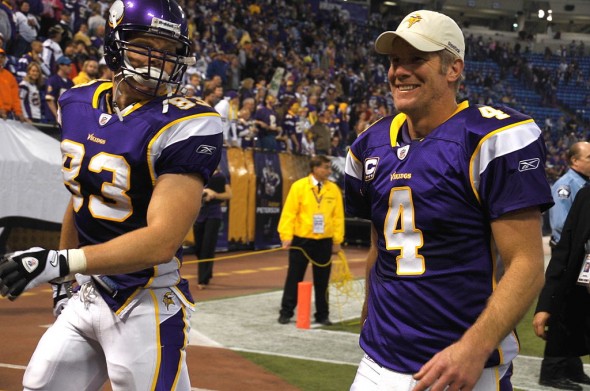 The fact that the Rams put in a call to Brett Favre, three years retired, says much about the QB talent pool in the NFL. / Wiki Commons

Nothing epitomized more the NFL’s steep drop-off in quarterback performance than the ESPN report that the St. Louis Rams had reached out to 44-year-old Brett Favre earlier this week.

Brett Favre, at 44? Really? He is an offensive coordinator at a high school in Mississippi, leading the Oak Grove Warriors as a volunteer assistant when he’s not spending time with his three-year-old grandson.

Formerly of the Packers, Jets, and Vikings, the NFL’s all-time leader in touchdowns, interceptions and inappropriate sexts left the game with concussions so numerous that he recently told the Associated Press he doesn’t remember watching an entire summer’s worth of his daughter’s youth soccer games.

Favre’s response when asked how many times he fielded blows to the head?

Naturally, Rams coach Jeff Fisher Thursday wouldn’t disclose if management did indeed contact Favre’s long-time agent, Bus Cook. The ordeal, for reasons clear to even the naive, was most embarrassing.

“During the process I didn’t disclose any information, and I feel no need to disclose information after the process,” Fisher said. “That’s how we are. That’s consistent with our policy and our philosophy.”

The act of desperation in the wake of Rams quarterback Sam Bradford’s knee injury pointed to a larger issue: The talent pool for starting-caliber quarterbacks is shallow. More discouraging is that an inordinate amount have gone down with season-altering injuries.

“We do play a contact sport. It’s unfortunate,” said Seahawks defensive end Cliff Avril Friday. “Guys are going to hurt. I’ve only been keeping up with our quarterback. As long as he’s healthy, I’m happy.”

As detailed in a Los Angeles Times article, nine teams have started at least two passers through the first seven weeks of the season. That number magnifies when one looks at the Buffalo Bills, who, after an injury to starter E.J. Manuel and cycling through former WSU quarterback Jeff Tuel, settled on a practice squad call-up named Thad Lewis.

For the Seahawks, the reality of a pass-happy NFL short on competent pass-throwers favors them in coming weeks. Three of their next four opponents (St. Louis, Tampa Bay and Minnesota) are shuffling through the bottom of the league’s quarterback bin by the time they match up with a defense fourth in the NFL in sacks (23), third in scoring defense and second in total yards allowed (282.1 per game).

And this comes after benefiting in the previous two games from less than stellar work by Arizona’s Carson Palmer and Tennessee backup, Ryan Fitzpatrick. The Seahawks have faced only three premier QBs this season: Cam Newton of Carolina, Colin Kaepernick of San Francisco and Andrew Luck of Indianapolis.

For St. Louis (3-4), the load falls on former University of Oregon star Kellen Clemens, an NFL drifter, who, at 30, joked earlier in the week that Fisher had installed a package of read-option plays to maximize his speed.

Clemens is a drop-back passer, his only advantage over Dan Quinn’s defense being that there isn’t much film for coaches and players to study. Selected by the Jets in the second round of the 2006 draft, Clemens hosts a 4-8 record in 12 starts over seven years.

“He’s a veteran. You can’t take anything away from him,” Avril said. “He’s been playing for a while. He’s clearly there to mentor Bradford a little bit, so you can’t take him lightly.”

A diplomatic response, but nobody would blame Seattle for stifling a chuckle at Bucs quarterback Mike Glennon (26th in total QBR), or Vikings’ starter Christian Ponder (24th in QBR), or two-time Super Bowl winner Eli Manning, whom the Seahawks play Dec. 15 in New York. Through seven games, Peyton’s little brother is 30th in the NFL in QBR, posting a score of 36.6 out of 100.

He doesn’t have to worry — the Seahawks are reaping the benefits. But they dare say nothing, lest the contagion fells their own quarterback.