After a bye week, Washington State hopes to get an edge from chilly weather when it hosts No. 25 Arizona State, which has won eight of the last nine in the series. 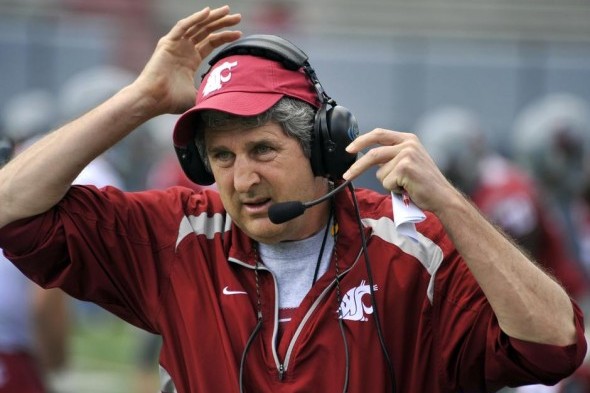 Mike Leach and the Washington State Cougars return to Pac-12 play with a Thursday night date opposite 25t-ranked Arizona State, which has dominated WSU in recent meetings. / Wiki Commons

It is a storyline tired and recycled, though without fail, it emerges toward the end of October, when temperatures in Pullman dip into the 30s and fans reach for their peppermint schnapps and Busch Light.

If the past decade is any indicator, the answer is yes.

WSU has to buck a major trend if they wish to pull a Halloween upset against the Sun Devils, first in the Pac-12 South and 25th in the AP poll.

What it means for the Cougars: A win would push WSU a single victory away from bowl eligibility with matchups remaining against Arizona, Utah and Washington, all of whom feature winning records but are outside the Top 25 in both polls. A loss doesn’t cripple a WSU team that most predicted would finish with between four and six wins, though it would make a bowl game a lot more unlikely.

What it means for the Sun Devils: Arizona State needs this win to stay alone atop the Pac-12 South and give it an outside shot to make a BCS bowl game, assuming No. 3 Oregon fools nobody and runs the table. A loss throws ASU back into the mediocre territory the program has gained a reputation for staying in during the last decade.

Key Matchup: WSU offensive line vs. ASU defensive line. The Cougars in the off-season took strides in shoring up the offensive line, and it’s paid dividends. A year after they gave up 4.75 sacks per game, they allow slightly less than two despite throwing the ball almost every play. However, their stiffest test comes Thursday against DT Will Sutton and an ASU defensive line that two weeks ago made UW quarterback Keith Price spend more time backpedaling than the Supreme Court.

SERIES: Dates to Oct. 1, 1960, when the Sun Devils defeated the Cougars 24-21 in Tempe, AZ. Washington State trails the all-time series 24-13-2 but claimed the last matchup in Pullman 37-27 in 2011 behind Connor Halliday’s 494-yard, four-touchdown performance after coming off the bench. The Sun Devils have won eight of the last nine meetings, including a 46-7 victory in Tempe last season.

WSU HEAD COACH Mike Leach (91-56 overall, 7-13 WSU): Hired Nov. 30, 2011 to replace Paul Wulff, who went 9-40 in four seasons, Leach’s 2012 Cougars led the Pac-12 in passing at 330.4 yards per game and finished the season by beating Washington in the Apple Cup. In 10 seasons at Texas Tech (2000-09), Leach earned 10 bowl bids. The Susanville, CA., native, who was raised in Cody, WY., recorded a school-record 84 victories. Leach’s offenses led the nation in passing six times and three times accumulated the most total yards. In 2009, the Red Raiders finished second in passing offense and fourth in total offense, both marks tops among BCS conference schools. Prior to Texas Tech, Leach spent one season as the offensive coordinator at Oklahoma (1999). That year, the Sooners set six Big 12 and 17 school records.