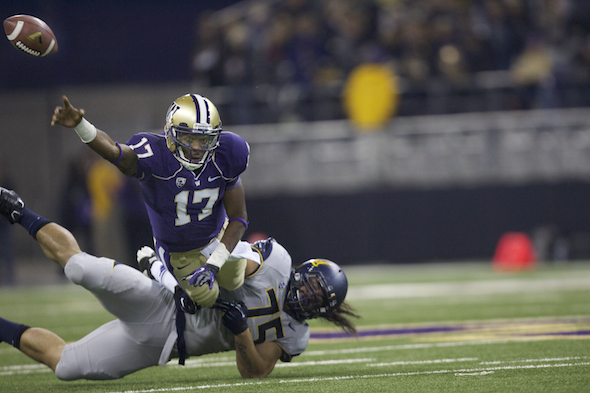 Keith Price was knocked around some by Cal pressure, but he often escaped, too. / Drew Sellers, Sportspress Northwest

That Washington’s 41-17 win against Cal remained in doubt until running back Bishop Sankey shot for a 59-yard touchdown with 1:08 remaining in the first half was surprising, given how the 1-7 Golden Bears (0-5 Pac-12) looked utterly hopeless before Saturday night at Husky Stadium.

Their momentary show of competence, however, didn’t stop a UW rout.

Against a banged-up Cal defense that ranks near the bottom of the country in most every  category, quarterback Keith Price — with a wrapped wrist rather than a taped thumb — rediscovered his deep touch with the ball. Sankey and the UW defense rebounded from a bad game at Arizona State, and the Huskies won convincingly.

The Huskies’ 643 yards of total offense was fifth-most in school history.

The UW returned to early season form, sans a stretch in the second quarter where four consecutive drives ended in a punt. The explosive plays coach Steve Sarkisian prides his offense on were almost constant.