Moving into sixth place on UW’s all-time rushing list, Bishop Sankey did in Saturday’s win what he always does: Stay consistent. 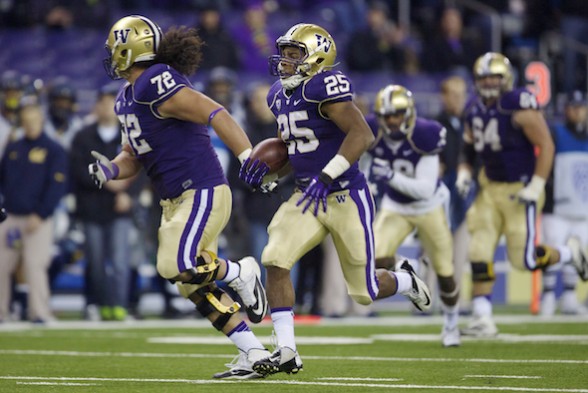 Bishop Sankey scored a 59-yard touchdown late in the first half to put Cal away. / Drew Sellers, Sportspress Northwest

Washington running back Bishop Sankey racked up big mileage Saturday in a 41-17 triumph over Cal, though he didn’t top the school’s single-game rushing record when Hugh McElhenny in 1950 torched Washington State for 296 hashes.

He probably would have, had Huskies coach Steve Sarkisian not eased off Cal’s gullet, leading by 31 points midway through the fourth quarter.

At halftime, Sankey had 16 carries for 188 yards and two scores, his runs of three and 59 yards providing quarterback Keith Price time to adjust to a Cal secondary that confounded him for most of the second quarter. Nary a day passed last week without coach Steve Sarkisian expressing the need to make Sankey a focal point of the offense after he received only 13 carries in last week’s 53-24 loss to Arizona State.

By the end of the first quarter, it was clear Sarkisian meant it.

“We came out in the first half and ran the ball really well and that was something we were looking to continue into the second half,” Sankey said.

To say the least.

Sankey had a career-best 241 yards on the ground, the eighth-best single-game mark in school history. Yet he didn’t do anything spectacular, nothing to drop jaws. Sankey, always polite away from the field, showed the same consistency on it.

None of his runs against Cal’s porous rush defense (entered ranked 10th in the Pac-12) will make the SportsCenter’s Top 10, though that likely didn’t matter to him. Sankey didn’t even know he was past halfway to McElhenny’s record at halftime.

Allow Cal coach Sonny Dykes to brag for him.

“He’s a really good running back. He runs tough,” Dykes said. “He’s a hard guy to find. He’s not real tall, so he hides. He reversed his field a couple times and got big plays on us.”

As he has been all season, Sankey was smart and patient, waiting for holes to open before bursting through them. His pair of touchdowns were the 28th and 29th of his career, moving him into a tie with Jake Locker and Rashaan Shehee for third in school history.

The offensive line, minus starting guard Dexter Charles, helped him along. Nearly all his big gains came when space opened.

“I thought our offensive line did a helluva job opening up lanes for Bishop to run through,” Price said. “I think Bishop had an outstanding night . . .  a breakout game for him.”

Sankey’s 59-yard run as the first half wound down gave the Huskies a 24-7 lead and stomped out hope of a Cal upset.

In the second quarter, he broke the 1,000-yard mark for the second consecutive season, making him the fourth Husky (Napoleon Kaufman, Chris Polk and Greg Lewis) to rush for four digits in more than one season.

Sankey exceeded the century mark for the 13th time in his career and the 10th time in his past 13 games. He came in seventh in school history with 2,547 rushing yards and left in sixth, surpassing Jacque Robinson (2,636),

Given the news that wide receiver Kasen Williams was lost for the season after suffering Saturday a broken and dislocated foot, expect heavier doses of Sankey in the last four regular season games.

“He is what he is,” Sarkisian said. “I was kicking myself after last week’s game that he only had 13 carries — that we didn’t give him enough opportunities, because when we give him his opportunities, he’s so consistent.

“When the defense is wrong, they’re going to pay. That was obvious tonight.”