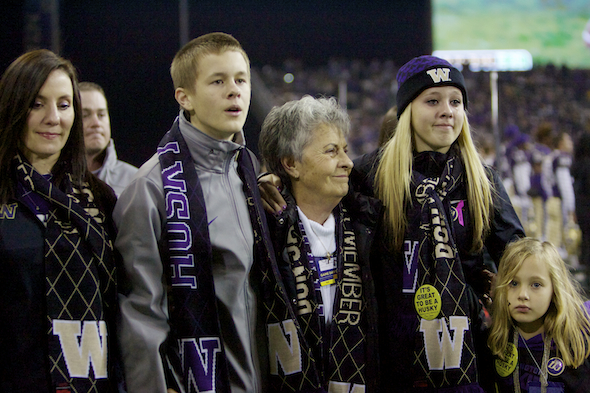 Carol James, wife of the late Don James, and several of their grandchildren, were saluted before the game against Cal Saturday. / Drew Sellers, Sportspress Northwest

The football salute couldn’t have been scripted better Saturday night: A physical domination of an overmatched conference foe, a 200-yard rushing game from a power back, all outfitted in the traditional uniform style of the 1980s glory years on Homecoming weekend. With dozens of his former players in attendance, Don James was bid farewell in an emotional evening full of symbols, memories and music at Husky Stadium.

In the first game since the death Sunday of the greatest coach in Washington’s football history, the Huskies beat Cal 41-17 to end a three-game losing streak. The 642 yards of total offense was the fifth-most in school history, and Bishop Sankey rushed for a career high 238 yards.

Pre-game, James’ wife, Carol, their children, Jeff, Jill and Jeni, and 16 grandchildren and extended family members were led onto the field and hailed by the stadium crowd, many of whom were around for James’ tenure from 1975 to 1992 that produced six Rose Bowl appearances.

The Husky band played “America The Beautiful” as the stadium flag was lowered to half-mast, and the stadium fell silent.

The field was decorated at the 25-yard lines with a large “DJ” in  white letters within large purple circle. Helmets of both teams bore similar stickers.

As the Washington band offered its “Tribute to the Dawgfather,” the evening’s highlight was a powerful video of the James era played on the stadium video screens, narrated by longtime Huskies broadcaster Bob Rondeau.

The crowd erupted as a picture of James holding the 1991 national championship trophy flashed onto the big screen, and followed the video with a standing ovation.

The crowd continued to stand, cheer, sing, and dance as the band played “Shining Star” by Earth, Wind, and Fire, “Boogie Nights” by The Sylvers, and “Celebration” by Kool & The Gang. The band formed the script, “75 DJ 92” to mark his tenure.

The public is invited to a public memorial service at 3 p.m. Sunday at Alaska Airlines Arena. 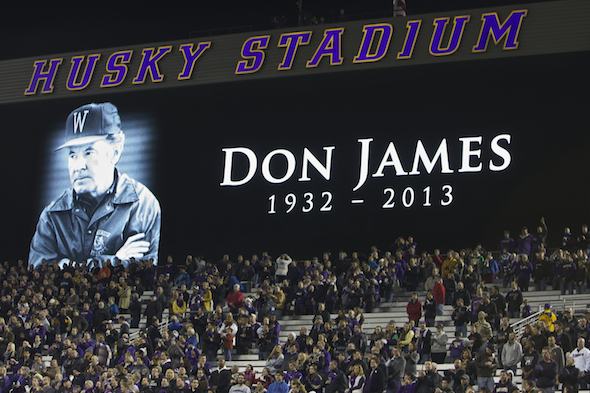