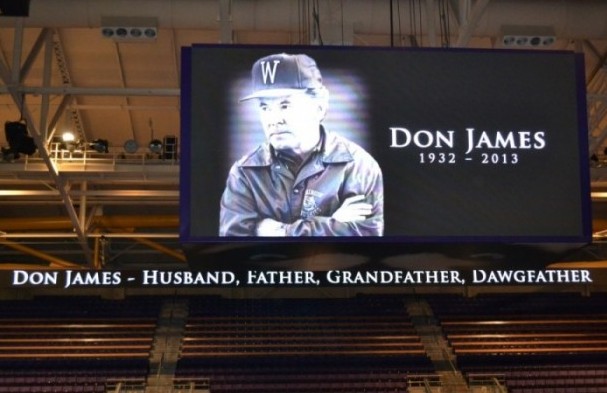 No individual who patrolled a Northwest sideline, be it field, court or diamond, ever commanded more respect than Don James, whose memorial service Sunday afternoon at Alaska Airlines Arena underscored the depth of esteem in which the coaching legend is – and will always – be held. The gathering drew hundreds of James’ former coaches, players, colleagues, and friends, as well a legion of fans that admired him only from afar.

Washington’s head coach from 1975-92, the greatest era of Husky football history, and an era entirely of his making, James passed at age 80 Oct. 20 after losing a short battle with pancreatic cancer. The exact time of his death, 11:25 a.m., became a topic of discussion. 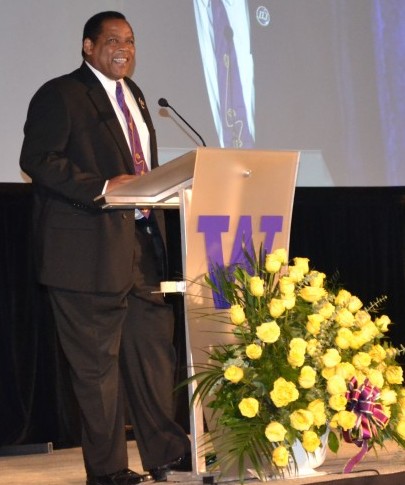 Former Husky (and Seahawk) linebacker Michael Jackson was one of several to speak at the Don James memorial Sunday at Alaska Airlines Arena.

James compiled a record – 153 wins, 15 bowl games, a co-national championship, six conference championships, awards galore — over 18 seasons unlikely to be matched given the transient nature today of the game he mastered. But it was not so much the record that eulogizers emphasized Sunday. They focused instead, as a large reader board in the arena aptly put it, on these themes, in order: “Husband, Father, Grandfather, Dawgfather.”

Jim Mora Sr., who coached at UW in the late 1970s before embarking upon a pro career that culminated in his leading the New Orleans Saints and Indianapolis Colts, flew in from Palm Desert, CA. Gary Pinkel, who played under James at Kent State, coached under him at Washington (1979-90), and is now head coach of nationally ranked Missouri, made the trip from Columbia after a Saturday OT loss to South Carolina. Skip Hall, another longtime James assistant at Kent State and Washington, arrived from Boise.

Nick Saban, head coach of No. 1-ranked Alabama, a former James underling at Kent State (1972-74), and one of the most prominent members of the James “coaching tree,” couldn’t attend the service, but provided a video tribute. 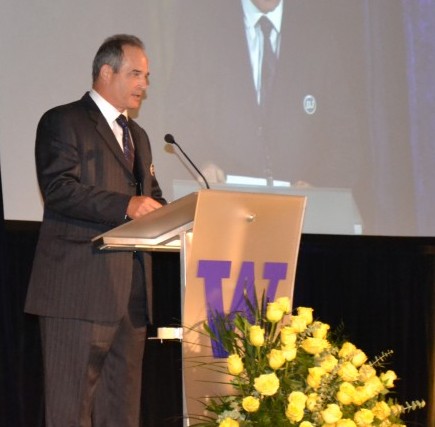 “I don’t know what he ever saw in me, but he strongly urged me to get into coaching,” Saban said. “He became my coach, my mentor and my friend. Our program here (Alabama) reflects many of the things I learned from him. For Don James, I can’t think of a more appropriate word than ‘class,’ and there isn’t anybody I ever looked up to more.”

A parade of speakers echoed Saban’s sentiments and each told an anecdote or two about life with/under James. The most common theme: James’ relentless attention to detail, his meticulous adherence to time management, and his extraordinary bent for planning and even pre-planning, all qualities that helped him land in multiple halls of fame following his UW exit in 1993.

Mike Rohrbach, who played under James from 1975-77 and was part of Washington’s 1978 Rose Bowl team, had an opportunity to have lunch with James and his wife of 61 years, Carol, in Palm Springs, CA., before James became ill.

According to Rohrback, when James spotted him, he turned to Carol and said, “I told you he’d be early. He’s one of my former players.” 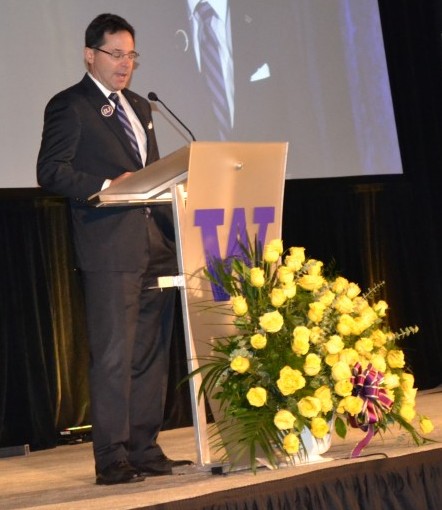 Former All-America placekicker Chuck Nelson played under James from 1979-82 and said that while James had an open-door policy, “you never wanted to see his door open.”

Sam Wick, a long-time friend of James and a man James got to know through their church, provided the main “headline” Sunday when he underscored James’ legendary insistence that everything be organized in fanatical detail. According to Wick, James even planned his own memorial service with the same fastidiousness that he plotted to beat USC.

“He was totally involved in it. He knew what the music was going to be,” said Wick. “He even had the singers over to his house (four days before his death) to go through their songs.”

“I’ll bet you never realized what kind of coach you were getting when he stepped off that plane in 1974,” said Pinkel, now widely considered one of the best college football coaches in America.

No one did, except perhaps Lude, who first encountered James at a game at the University of Colorado in 1970, when James was serving as an assistant there. According to Lude, he and James spoke for about 45 minutes, Lude later became athletic director at Kent State, and hired James as his football coach at his first opportunity.

“You can’t have him,” Lude told Kearney, not seriously. Lude then encouraged James to accept the Washington job, if offered.

In media accounts of the day, James was not the first choice to replace Jim Owens, an icon who had ruled Husky football for 18 years of his own, 1957-74. California’s Mike White, San Jose State’s Darryl Rogers, Howard University’s Douglas Porter and Green Bay Packers coach Dan Devine were all considered frontrunners with Rogers as the favorite.

But in a surprise move to everyone but Lude, Kearney, who had already hired Marv Harshman to coach the men’s basketball team, settled on the 42-year-old James. The hiring didn’t wow anyone, James having compiled a 25-19-1 record at Kent State in four years following gigs as an assistant at Florida State (1959-65), Michigan (1966-67) and Colorado (1968-70).

James went 6-5 and 5-6 in his first two UW seasons, started 1-3 in his third and appeared to be another in a long line of Husky coaches unable to produce anything better than .500 teams. One game – Oct. 8, 1977 at Oregon – changed everything. The Huskies went into Eugene that day, frolicked 54-0 behind quarterback Warren Moon, and the James era was on.

He took his teams to six Rose Bowls, two Aloha Bowls, two Sun Bowls and two Freedom Bowls, plus Orange and Independence bowls. He nearly won the national championship with his 1984 team (No. 2 in the final polls) and claimed a share of it with his 1991 team.

Along the way, he out-coached the most acclaimed mentors of his day – Bo Schembechler, Hayden Fry, Bobby Bowden, Joe Paterno – and probably would have coached another decade if Pac-10 sanctions against his program, sanctions he believed unfair, hadn’t prompted his resignation days before the start of the 1993 season.

Twenty-odd years later, the UW football program is only now beginning to recover from that resignation and may never reclaim the status it enjoyed under James. But if he did nothing else, he established a standard.

“He is the man who established the standard for all Husky football coaches now and forever,” Lude said Sunday, an opinion upon which current head coach Steve Sarkisian amplified.

“He set the standard for all UW athletics,” said Sarkisian. “He changed the face of UW athletics and defined what’s acceptable, which is championships.”

“When I first arrived at Washington from Pasco,” said former linebacker Michael Jackson, we played a game at Alabama and lost 52-0. “We had a drug issue. They drug out butts up and down the field. But we finally went to a Rose Bowl. I’m often asked what it was like to play for Coach James, and I always say it was the greatest experience of my life.”

“I met him when I was 18 years old,” said Pinkel, who left Washington to become head coach at the University of Toledo. “I wanted to coach because of Don James. I built my program at Toledo modeled on the Don James program and I did the same at Missouri. Because of Coach James, I will always be a Husky.”

“I, we, all of us, are going to tell our children and our grandchildren about that man,” said Jackson.