The Sounders, in the MLS Cup playoffs for the fifth consecutive year, face the Colorado Rapids in the knockout round Wednesday. Colorado smoked Seattle 5-1 Oct. 5. 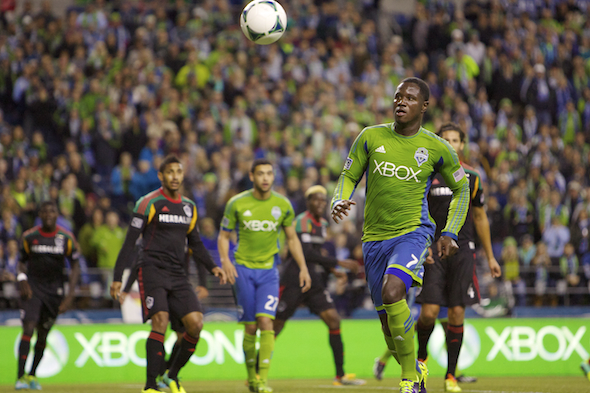 Eddie Johnson has scored seven career goals against the Colorado Rapids, including three as a member of the Sounders. / Drew Sellers, Sportspress Northwest

The last thing the Sounders wanted was what they have: A play-in game with the Colorado Rapids, winner advancing to the Western Conference semifinals opposite Portland, loser going home. As the No. 4 seed in MLS West after their 1-1 draw with the LA Galaxy last Sunday, that’s the Sounders’ fate Coach Sigi Schmid tried to put the best spin on it.

“Adam Moffat told the team that last year that’s where Houston was,” said Schmid, referencing the Seattle midfielder’s experience with the 2012 Dynamo. “Houston finished fifth and they got to the MLS Cup. It doesn’t matter where you are. You just have to win your games and move forward.

“Certainly Wednesday is a game you have to win because it’s a one-off. And then after that you get into the next series. We have to be prepared Wednesday. We owe Colorado one.”

The Sounders last saw the Rapids Oct. 5 at Dick’s Sporting Goods Park in Commerce, CO. Seattle entered that match with an eight-game unbeaten streak against the Rapids and were dead in the water after 10 minutes — 10 minutes that changed the course of Seattle’s season.

Fourteen seconds in, DeShorn Brown got into the box on a run up the left side on a ball from Gabriel Torres and slipped a shot under the sliding Michael Gspurning inside the far post — the second-fastest goal in league history, Ten minutes later, Dillon Powers made it 2-0 on a corner kick.

The match leveled out for the next 20 minutes, but in the 31st, Brown scored again. By the time Eddie Johnson tallied in the 63rd, Seattle trailed 4-0 en route to a 5-1 hammering, matching Seattle’s franchise record for largest margin of defeat.

The rout launched a franchise-worst four-game losing streak, which cost Seattle a chance to finish first in the Western Conference, re-claim the Cascadia Cup and win the Supporters’ Shield. It also placed Seattle in a must-win situation against the LA Galaxy Sunday or face the prospect of having to play the quick-turnaround knockout game Wednesday. The only benefit is that Seattle doesn’t have to travel for the do-or-die.

“So we have the play-in game at home,” Schmid said. “Houston had it away last year. The Galaxy had it at home last year, beat Vancouver and moved forward from there. We are capable of doing the very same thing.”

Since squashing Seattle 5-1, Colorado played three matches, losing two while scoring three goals. The Rapids are coming off a 3-0 setback to the Vancouver Whitecaps.

“We have to play well,” said Clint Dempsey, who scored his first goal for Seattle Sunday. “It is going to be a tough game and we need to go out and play hard. We need to fight for each other. If we can keep a clean sheet, we have the quality up top to score goals.

“We did have the four-game losing streak. Now we need to get things right, and we have the quality on this team to do it. I’m not worried about the game from here on out.”

“We wanted to avoid this (Colorado) game, but now we got it,” added goalkeeper Michael Gspurning, who returned to the starting lineup Sunday after a three-match benching for allowing nine goals in a two-match span. “All of our minds are ready for Wednesday and that’s the most important thing.”

The Sounders also saw Eddie Johnson return Sunday and might have Obafemi Martins (groin injury) available for the Rapids, although he’s not listed among the probable starters.

“Hopefully if not in a starting situation, hopefully he’s a guy, if we need it, can come off the bench for us on Wednesday,” said Schmid. “If not, he’s fresh for the weekend.”

If there is a weekend. At least the Sounders know there is a chance. Last year, both MLS Cup finalists, Galaxy and the Dynamo, came through the knockout round. The Rapids won the 2010 MLS Cup as a fifth seed.

Speaking of Colorado, the Rapids have lost their last three road matches, all by shutout.

SERIES: Dates to May 23, 2009 and a 2-2 draw in Denver. Fredy Montero and Nate Jaqua provided the Seattle goals. Seattle has won four of five home contests, outscoring Colorado 11-5.

COMING UP: A victory sends Sounders to the Western Conference semifinals opposite the Portland Timbers Saturday at CenturyLink Field. A loss eliminates the Sounders.