UW quarterback Keith Price was regretful Saturday night of a misled throw that ended in wide receiver Kasen Williams leaving the game with a season-ending injury. 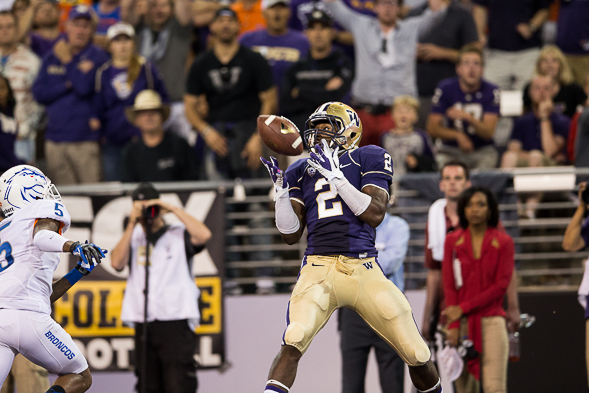 Washington wide receiver Kasen Williams was to have receiveds an MRI Monday, then surgery Tuesday for the left-foot dislocation and broken leg sustained early in the second quarter of Saturday’s 41-17 win against Cal. The injury came when UW quarterback Keith Price underthrew a deep ball down the Huskies’ sideline, with Cal cornerback Kameron Jackson applying tight coverage.

Williams, six-foot-two, jumped and came down awkwardly, crumpling to the ground after Jackson landed on top of him. Cringe-worthy replays on Fox Sports One showed the wide receiver’s ankle bent severely in an unnatural direction after hitting the FieldTurf.

“(The pass) could have gone a little further down the field, but it’s a play that Kasen routinely makes,” Huskies coach Steve Sarkisian said Monday. “We’ve grown accustomed to him jumping up and making those plays. It was just an odd play where the defensive back landed right on the back of his leg and with all the force caused the break in the leg, and then the injury to the foot.”

UW medical staff helped Williams off the field, then put his leg in an air cast. They transported the junior from Skyline High School (Sammamish) to Harborview Medical Center, though, according to multiple reports, he didn’t stay the night.

Sarkisian said he doesn’t know if Williams will be able to return this year. If the Lisfranc diagnosis reported mid-game by KJR sideline reporter Elise Woodward is correct, the junior could miss up to a year, maybe longer.

In a 2006 game against Oregon State, former Husky quarterback Isaiah Stanback went down with a Lisfranc injury, sidelining him for the rest of his senior season.

“We’ll be able to talk more specifically after the MRI and then ultimately after the surgery of where he’s at,” Sarkisian said. “To Kasen’s credit, he’s in good spirits. He came to coach James’ service yesterday, was with the team today, and he’ll take it like a champion.

“He’ll do whatever we need him to do to get healthy, and he’ll be back.”

Before the injury, Williams was still acclimating to his role in the inaugural year of Sarkisian’s up-tempo offense. In eight starts, he hauled in 29 catches for 421 yards and a touchdown, a year removed from leading UW wide receivers with 77 catches for 878 yards and six touchdowns.

Following Saturday night’s win, Price lamented that he hadn’t properly led Williams on the go-route, allowing more time to run under the pass.

“That’s just Keith,” Sarkisian said. “That’s just his mentality. He’s always one to take the blame and give the praise. I don’t need to talk to him so specifically that way about it. It’s his personality. That’s what makes Keith a great teammate and that’s why his teammates respect him so much.”

At 5-3 (2-3 Pac-12), UW’s bye week comes at an opportune juncture, according to Sarkisian: Multiple players are battling minor injuries, and it’s first-quarter midterms. Price, who was questionable to start against Cal until Thursday, won’t be limited this week in practice by the thumb aggravated Oct. 5 in a loss to Stanford.

Against the Golden Bears, the redshirt senior was mostly economical and at times explosive (other than a brief offensive lull in the second quarter), hitting on 20 of 32 passes for 376 yards and two touchdowns, including 68 and 47-yard aerial connections to Jaydon Mickens.

“We had some pretty favorable match-ups with (Jaydon) one-on-one with safeties and (he) can really run,” Sarkisian said. “We saw that in the short game, but he got opportunities down the field with these safeties one-on-one and Keith recognized it and got him the ball.”

Meanwhile, Sarkisian said he won’t make any wholesale moves to compensate for Williams’s likely long-term absence. The Huskies want to be a run-first team with a quarterback that can effectively maneuver through his progressions.

Washington’s Travis Coons is quietly having a sterling senior season, highlighted Monday when he won the Pac-12 Player of the Week for special teams. Coons handled field goals, kick-offs and punts Saturday against Cal, knocking in tries from 42 and 46 yards and having three punts downed inside Golden Bears 10-yard line. In 2013, Coons is a perfect eight-for-eight on field goal attempts and has knocked in 34 of 35 extra points.