Despite their recent offensive struggles, the Seahawks are a 16-point favorite to defeat the winless Tampa Bay Buccaneers (0-7) Sunday at CenturyLink Field. 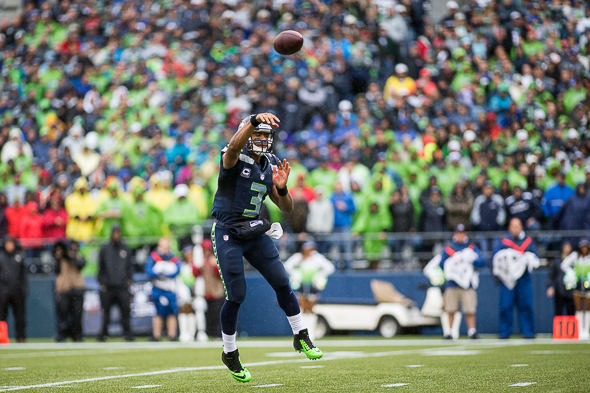 The Seahawks closed the first half of the season Monday night in St. Louis with a 14-9 victory over a division rival, a fourth road win of the season and and a 7-1 record that leads the San Francisco 49ers by a game in the NFC West. The Seahawks could not have accomplished much more, except perhaps beat every opponent by 30 points, which seems to be the expectation.

It is not Pete Carroll’s expectation, but even Carroll admitted this week that the Seahawks have considerable room for improvement.

“We are so far away from playing the way we’re capable of playing that it’s exciting to see where we can take it,” Carroll said. “We have to find the focus to make the very most of today, and that’s what we got to do every single day through this thing. Just keep on taking it one step at a time and correct the things that we can correct.”

The fixes include, principally, protecting Russell Wilson, who has been sacked 27 times and is on pace to break Dave Krieg’s 1985 franchise record for most takedowns in a season (52). Also included is feeding Marshawn Lynch more than eight times, his total work load  Monday against the Rams.

The pressure/sacks/hits number on Wilson this season, according to Pro Football Focus, is 13.3 per game. Last year it was 10.0.

“If we can do a good job of that, we’re going to have a pretty darn good season,” said Carroll. “I’m happy that we finished (the first half) as well as we could have, and I’m excited about the start of the second half. To me, it’s the beginning of the finish aspect of the season.”

The Seahawks face the worst team, by record, on their schedule, the 0-7 Tampa Bay Buccaneers, whose coach Greg Schiano, has been blamed for most of Tampa’s ills, and a rookie quarterback in Mike Glennon, once a roommate of Wilson’s at North Carolina State who took over when Wilson left to play pro baseball.

Schiano, who came to Tampa from Rutgers, is accused is micro-managing the Buccaneers, as well as rigging a players’ vote so that quarterback Josh Freeman wouldn’t be elected a team captain. Freeman subsequently bolted to the Minnesota Vikings, muttering vile things about Schiano as he departed south Florida.

“There is a lot of disarray in Tampa,” former quarterback Shaun King told The Tampa Bay Times. “Greg Schiano is a micro-manager, and it’s starting to wear thin with some of the players. I don’t think those guys are currently buying into his my-way-or-the-highway.”

Tampa Bay features the NFL’s 31st-ranked offense (14.3 points per game) and the 18th-ranked defense (23.3). But while the Buccaneers have been outscored by 63 points, they have only been drubbed twice and have lost three games by a touchdown or less.

The Buccaneers entered the season emphasizing the run, but after Freeman left for Minnesota, they made Glennon the starter and he’s been averaging 45.2 passes per game, not only the highest average in the league, but a record by a quarterback in the first four starts of a career.

“I think we’ve put Mike in a bad spot,’’ Schiano said. “He’s throwing too many passes. Even the last game, we had to throw at the end of the game. Yeah, we did, but, within the first three quarters we should have ran the ball more. I’m disappointed in myself for not making sure that happened. I can see how it happens. I’m not being judgmental on anybody. But we shouldn’t put him in that spot as coaches. We’ve re-evaluated that and we’re going to try to play a little more balanced.”

The Seahawks are 16½-point favorites, but won’t talk smack about a winless opponent.

“This is a solid team with a really nasty defense,” said offensive coordinator Darrell Bevell. “It’s going to be another great challenge for us. They challenge you in a number of ways in the amount of pressure they bring. They bring pressure quite often and they have quite a few variations of how they like to bring pressure. So the big question that we have to answer this week is how to handle their pressure.”

The Seahawks haven’t handled it well. Wilson was sacked seven times by the Rams and has gone down 10 times the past two weeks.

“I just want to see us get back to playing ball like we’re capable of playing on offense,” said Bevell. “We have a high-powered offense. I know we can put points on the board. We can put yards on the board. All of our guys are champing at the bit to get the ball; they feel like our offense is much better than we’ve put out there, and I agree with them.”

The Seahawks are still missing starting tackles Russell Okung and Breno Giacomini, neither due back for a couple of weeks, as well as S Jeron Johnson and FB Derrick Coleman. With WR Sidney Rice out for the season, the Seahawks have added Ricardo Lockette as a numerical replacement, which means that former Washington Husky Jermain Kearse should see considerably more involvement in Seattle’s offense.

Lynch also missed two practice days this past week with a sore knee, but is expected to play Sunday.

SERIES: Dates to Oct. 17, 1976, when the Seahawks, an expansion team, defeated fellow expansionist Tampa Bay 13-10. Jim Zorn threw a 15-yard touchdown pass to Sam McCullum and John Leypoldt kicked two field goals for Seattle. The Seahawks have lost three in a row to Tampa Bay, most recently a 38-15 loss Dec. 26, 2010. Seattle has not defeated Tampa since 2007.

SEAHAWKS HEAD COACH: Pete Carroll (65-55 career, 32-24 Seattle) is in his fourth season. In 2010, he directed Seattle to the NFC West title, the Seahawks becoming the first team in NFL history to win a division with a losing (7-9) record. Prior to joining the Seahawks, Carroll served as head coach at Southern California, where his Trojans won seven Pac-10 titles.

BUCCANEERS QUARTERBACKS: Mike Glennon, a third-round pick by Tampa in the 2013 draft out of North Carolina State, has completed 106 of 181 passes for 997 yards, six touchdowns and three interceptions for a passer rating of 78.0. Glennon has made four starts after replacing Josh Freeman.