Pete Carroll and John Schneider’s decision to take converted linebacker Bruce Irvin with a first round pick is paying dividends. 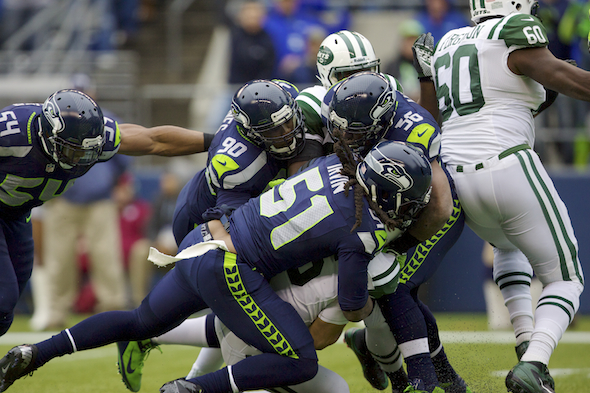 Bruce Irvin had the best game of his career Monday with nine tackles and an interception. / Drew McKenzie, Sportspress Northwest file

Unprompted, Pete Carroll gushed, which in itself is not unusual. Carroll has a way of making the most pedestrian moment seem like watching sunrise in Yellowstone. What made this episode notable was the first recorded Carroll geyser for Bruce Irvin that was based on fact instead of potential.

Lost in the hand-wringing over the Seahawks’ turgid 14-9 win over the Rams Monday was  that Irvin, in his fourth career game as a linebacker, had nine tackles, a sack, a forced fumble and an interception.

“Bruce had a fantastic game,” Carroll said, offering a make-up soliloquy for his post-game oversight. “He was all over the place. He just looked really comfortable playing the position, and all of the different things that we’re doing with him. If there was a thought that this was an experiment at one time, it’s totally working out.”

The experiment is working so well that Irvin is declaring that it rescued his career.

“I tell (Carroll and the coaching staff) you saved my career making me a linebacker,” he said Wednesday. “I thank them every day. Just got to work hard to show he made the right decision.”

Irvin didn’t have a bad first season — his eight sacks led all rookies — but he was either bewildered or over-matched at times as a defensive end. It seemed that he either didn’t have the technique or, at 240 pounds, the body for the job.

He demonstrated that in the first quarter Monday when he made his first NFL interception, a downfield one in coverage of a back on a wheel route.

“It showed I can do more than just come in on third down,” he said. “I can drop, I can cover, I can play one-on-one on running backs and tight ends. It’s more of a complete position, rather than a specialist as I was last year.”

Irvin’s breakthrough is a big deal for the Seahawks because Carroll and GM John Schneider took a lot of crap for using a No. 1 pick, 15th overall, on a player out of West Virginia who was labeled one-dimensional and a head case, a stain made worse when Irvin missed the first four games this season for violating the league’s substance-abuse policy, reportedly for the stimulant Adderall.

Carroll, who when he was coaching USC tried to recruit Irvin out of junior college, said he thought the consensus opinion on Irvin’s limitations was unfair, and now has an investment in proving the critics wrong.

Asked what Carroll saw that others didn’t, Irvin, who had a wretched childhood of violence and abandonment, was candid.

“Pete saw a kid who had a lot of baggage, ” he said, “a lot of personal issues, but he surrounded the kid with a lot of positive things and got a lot of great production out of him.

“There were lot of issues about me, and as you know I got into another one (the suspension). Those guys still believe in me.”

Irvin is working his way back into good graces. And, as a first-year linebacker, he still has work to do on being assignment-correct. He admitted on the Rams’ final drive, he let a running back “leak” into a big run, and was not in on the goal-line unit that made the last-minute stop after the Rams had traveled 96 yards.

“I was being too greedy,” he said of the blown assignment, “not playing in the works of the defense. I think that was our main problem all night. I don’t think they pounded us. They play assignment football and executed a good plan. I think we were overly aggressive.”

But the defense still managed to deny all night the end zone to a division rival playing at home. Yes, the Rams were using their backup quarterback, but that’s a popular trend around the league for which the Seahawks defense has no reason to apologize.

They get another one Sunday when Tampa starts rookie Mike Glennon. All the Seahawks can do is drop a 250-pound linebacker in coverage and see if Glennon wants to test “the experiment.”

The Seahawks Wednesday put WR Sidney Rice on injured reserve, formally ending his season as he awaits knee surgery, and added WR Ricardo Lockette from the practice squad. It didn’t sound as if WR Percy Harvin was going to be back for the Tampa game.

Admitting Harvin “did very little” last week in his return to practice, Carroll said he was “a little bit sore” from the work and was seeing his rehab specialist Wednesday.

“We just want to make sure that we don’t go too far too fast,” he said. “We’re looking for the long haul. We’re being very careful. It seems like it’s best to keep him in that mode for a little bit longer. We’ll see.”

Of the loss of Rice, Carroll said, “He’s a guy that we’ve gone to for a number of years here. we trusted the heck out of him, he’s a terrific football player, he’s a great catcher, he knows the system really well. he’s been around (OC) Darrell Bevell for so long that he really has it mastered, and so he helps other people around him play well. I was sick for him.”