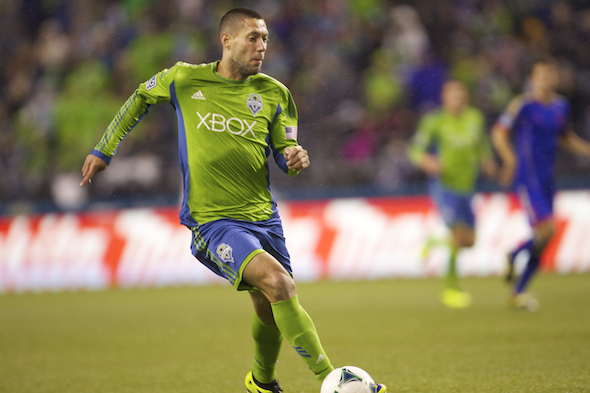 Brad Evans rocketed in a wide-open shot in the 28th minute, Eddie Johnson struck in stoppage time and the Sounders survived an injury to DeAndre Yedlin and a red card to goalkeeper Michael Gspurning to defeat the Colorado Rapids 2-0 at CenturyLink Field Wednesday night. Having survived the knockout round of the MLS Cup playoffs, the Sounders will advance to meet Portland in the Western Conference semifinals Saturday.

The Sounders snapped a seven-match winless streak in which they were outscored 15-5. They won despite having to play a man down for the the final three minutes of regulation and five minutes of added time. The victory avenged a 5-1 loss to Colorado Oct. 5 that launched the slide.

The Sounders, 3-1-2 in home playoff matches, will play without Gspurning, automatically suspended in the 85th minute after he was nailed for a handling the outside the box. He was caught between heading a ball and catching it, and lost track of the line.

But Evans, scoring his second career playoff goal, trapped a cross from the left side and drilled a wide-open shot from 18 yards past Irwin at the hear post to give the Sounders a 1-0 lead in the 28th minute.

Neagle narrowly missed a goal in the 32nd minute, one of several chances the Sounders scotched in a first half in which they dominated the run of play and kept the Rapids under constant pressure.

Yedlin suffered a badly twisted ankle in the 42nd minute and the Sounders were forced to play a man down for the remainder of the half. Yedlin couldn’t go in the second half, replaced by Marc Burch.

After Clint Dempsey sustained a hard smash from from Irwin in the 52nd minute that drew a yellow card, Burch nearly scored on a free kick, his shot ramming off the crossbar.

Gspurning drew the red card in the 85th minute and coach Sigi Schmid was forced to remove Neagle and insert backup goalie Marcus Hahnemann. Although a man down, the Sounders survived intense pressure from Colorado that didn’t abate until Johnson, two minutes into the extra session, took a pass from Dempsey, outmaneuvered a defender and slipped the ball behind Irwin for his ninth goal of the season.

In addition to the goals from Evans and Johnson, the Sounders did an outstanding job defending Deshorn Brown, who had two goals against Seattle in the last match between the teams.

“In the last couple of games we’ve been up 1-0 and let it slip,” said Evans. “But we did our best tonight and we’re excited for the weekend. We expect a good game. Portland will come in red hot and trying to make a statement. But we’ll be ready.”

In addition to Gspurning’s red card, six yellow cards were booked, four on the Rapids, two on the Sounders.