Sounders survive the knockout game with 2-0 win over Colorado but lose Yedlin to a sprained ankle and Gspurning to an ejection for a jaw-dropping handball error. 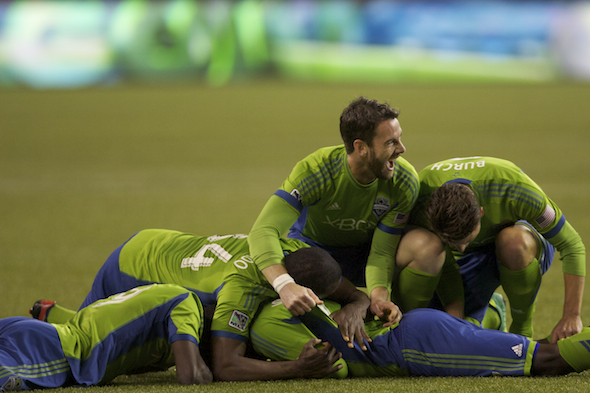 The Sounders celebrate after Eddie Johnson’s clinching goal in the 2-0 win over Colorado Wednesday night at the Clink. / Drew Sellers, Sportspress Northwest

“Out of the box” is a popular business phrase signifying creative thinking. In soccer, it is a phrase describing no thinking. The latter came to mind when Sounders goalie Michael Gspurning found himself on wrong side of the line with 10 minutes left in a loser-out game, against the equally desperate Colorado Rapids, that the Sounders led precariously, 1-0.

Gspurning was red-carded and ejected for handling the ball beyond the box, astounding teammates and the 32,204 at CenturyLink for so elemental an error in so significant a game. It meant the Sounders had to play a man down — Lamar Neagle left while Marcus Hahnemann replaced Gspurning in goal —  stretching the tension ever tighter with the season on the line.

Eight minutes later, Eddie Johnson lanced the boil with some nifty ballhandling that resulted in the final score in a 2-0 win and propelled the Sounders into the Western Conference final series. It was Seattle’s first win in six weeks, back to mid-September when their American football stablemates, the Seahawks, were just 1-0. In sports, that’s close to forever, especially for a team loaded with expectations.

But with one win, it’s a new day. Even if the day happens to be Saturday — the third game in seven days, thanks to the Sounders’ seven-game winless plunge that forced them for the first time in five years into the playoffs’ knockout round.

Just another obstacle in a season rich with them.

“It’s been a long time since we won a game,” coach Sigi Schmid. “We get reminded of that all the time. It’s a win over a team that embarrassed us last time. It’s not as if we were hanging on, scrapping to get by. It’s also knowing we played well.”

Indeed, Sounders were finally on their game, out-shooting Colorado 14-7 and 4-2 on target. But in the the 85th minute, Gspurning’s blunder left jaws agape. Even though it didn’t cost the Sounders Wednesday, it reverberates to the first game against the Portland Timbers, because Gspurning’s red card forces him to sit. Hahnemann, at 41, will start.

Gspurning said his mistake was in getting caught between going forward to challenge the shot of Drew Moor, or backing off to prevent a shot over his head.

“I wasn’t too far from the box so I thought I would take two quick steps back and catch it. But I think I missed one step back, so . . .  it is like it is.”

He was easily a a step and half beyond the line with his hands on the ball, leaving no choice for referee Silviu Petrescu. Gspurning pushed Moor away as he tried to slap away the ball, and Moor fell theatrically. But Gspurning was already done for the night in a most unusual, critical ejection.

But the subsequent free kick was swatted away and Hahnemann, who started two games in relief of Gspurning, was relieved.

“I hadn’t touched a ball since warmups, and all of a sudden, here we go,” said Hahnemann, a Seattle native and former Seattle Pacific University star. “But it worked out.”

Besides the loss of Gspurning for Saturday, Seattle may be without star defender DeAndre Yedlin, who sprained his right ankle in a collision just before halftime and could not return. Yedlin was part of a shut-down defense that was lit up on Oct. 5, when the Rapids won 5-1 to start the club record skid. In that game, Colorado’s Deshorn Brown scored two early goals, but this time Yedlin had a fire lit under him.

DeAndre stood up to the challenge,” Schmid said. “Brown torched him last time, and we told him, ‘It’s time to pay him back.'”

The Sounders’ two national team stars, Brad Evans and Johnson, did the flashy work of scoring, Evans in the 28th minute on a one-hopper from distance and Johnson in the 93rd  when he beat a defender one-on-one and put soft touch behind goalie Clint Irwin. Clint Dempsey drew the assist.

Dempsey was part of a freakish collision that nearly could have ousted Irwin. Dempsey had a breakaway in the 53rd minute and Irwin came out beyond the box to smash into him in the fashion of Seahawks safety Earl Thomas, knocking the Sounders star hard to to the ground and drawing a yellow card that some felt should have been a red.

Dempsey will be another one waking up sore from an intense game. They have to be ready with only two days off while Portland, seeded No. 1 in their first MLS playoff appearance, comes in relatively fresh.

“We’ll have to see how people recover,” Schmid said. “It’s a short turnaround for us.”

And two starters down. At least the Sounders can’t say they don’t have experience with being hurt, tired and shorthanded.