Mariners Could Do Worse Than Dave Valle

The Mariners’ search for candidates to replace Eric Wedge, who quit in disgust, includes ex-Mariner Dave Valle. A feel-good hire, he can’t hurt, because nothing is left to break. 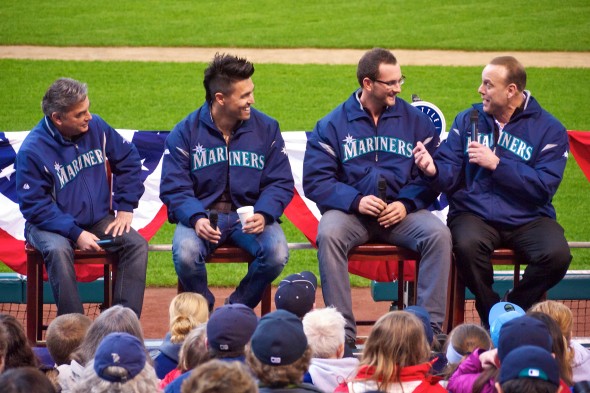 Dave Valle, who has done a lot of work on Mariners telecasts in recent years,  interviews, left to right, Rick Rizzs, Brandon League and Casper Wells  at FanFest./ flickr.com

After Eric Wedge said he would not return to the Mariners “even if they offered me a five-year contract,” a colleague made the e-mail observation: “Don’t know who will replace Wedge, and I’m not even sure it even matters. Who would want to manage the Mariners, anyway?”

Well, lots of guys, but none who have been major league managers, none who understand the Seattle organization or its history, and none, save one, whose name rings any bells.

According to CBSSports.com, Seattle has interviewed San Francisco Giants bench coach Ron Wotus, Athletics bench coach Chip Hale, Padres bench coach Rick Renteria, and Tigers hitting coach Lloyd McClendon, who is also a candidate to replace Jim Leyland, who retired. There are probably others, but these are the only ones so far identified (not a glitzy press conference in the making).

Thursday, the Washington Nationals filled their vacancy with former All-Star third baseman Matt Williams, who was the third-base coach at Arizona.

The Mariners have also, according to multiple reports, interviewed former Seattle catcher Dave Valle, who toiled for the club during its first Dark Age (1984-93) and is still prominent in the local baseball community due to his frequent appearances on Root Sports during Mariners telecasts.

Valle has never managed nor coached at the professional level. But he played 13 major league seasons, 10 with Seattle, and an additional three with Boston, Milwaukee and Texas. A good defensive catcher, Valle worked with two of the greatest pitchers of his era, Randy Johnson in Seattle and Roger Clemens in Boston.

Valle also is personable and possesses people skills and leadership ability. Of perhaps more importance, Valle is a relentlessly optimistic individual who understands the Mariners turgid past and is apparently not put off, as are millions of former Mariners fans, by 27 losing seasons in 37 years, including the current 12-year playoff absence. Unlike Lou Pinella, Mike Hargrove and Wedge, Valle probably would be able to work under CEO Howard Lincoln without resorting to ulcer medication.

As for Valle having no professional managerial experience, the comparison to Mike Matheny of the St. Louis Cardinals is a good one. Like Valle, Matheny played in the majors for 13 years for four teams. Like Valle, he never hit much, .239 to Valle’s .237. Matheny had the edge defensively, at least in terms of awards, earning four Gold Gloves, three with the Cardinals.

As with Valle’s relationship with the Mariners, Matheny had a significant grounding in his main organization, St. Louis, prior to becoming a manager.

Matheny had no managing experience when the Cardinals hired him. He returned to the Cardinals as a spring training special adviser in January, 2008, two years following his retirement as a player.

Succeeding Tony La Russa, Matheny went 88-74 in his first season (2012) as the Cardinals reached the NLCS, and this year finished 97-65 and went to the World Series that ended in a Boston victory Wednesday night.

Valle, or whomever is tapped to replace Wedge, won’t have that kind of immediate success because the Mariners, unlike the Cardinals, are not built to succeed. Rather, they have been constructed as a fun summertime entertainment/amusement/diversion, usually good enough to make a profit, never good enough to make October.

Mull this: In baseball’s first 90 years, no team has gone from worst to first. But in the past 24, it’s happened 11 times, most recently with this year’s World Series champion Red Sox, who were 69-93 a year ago, 26 games behind the Yankees, and this year finished 97-65, a 28-game improvement.

Since Seattle last experienced a playoff team, 2001, four other clubs have gone from first to worst — Arizona in 2007, the Cubs in 2007, the Rays in 2008, Arizona again in 2011. Over the same span, the Mariners have finished fourth in their division eight times, third three times and second once (2007). They were fourth again this past season, working under their sixth manager, soon their seventh.

Every year heading into spring training, the idea for most teams is that a championship awaits, or is at least possible. That is never the case with the Mariners, and will never be until there is a change at the top of the organization. As Art Thiel argued in “Mariners Nearly a $1 Billion Enterprise,” the Mariners, from a business perspective, have no incentive to win.

For that reason, the new manager isn’t going to matter much because he will not be given the opportunity to do what he believes is needed He will also be working for a lame-duck GM, at least as of the moment, in Jack Zduriencik.

Valle would be a familiar, feel-good hire for a franchise that has invested heavily in “feel good” as a way of conducting business. Valle, or whomever the Mariners pick, isn’t going to fix anything, but he won’t break anything, either, there being nothing left to break.