Thiel: Sounders give away the edge at home

Defensive breakdowns cost the Sounders the home-field edge as the Timbers take 2-1 game and the advantage in the Western Conference playoff series. 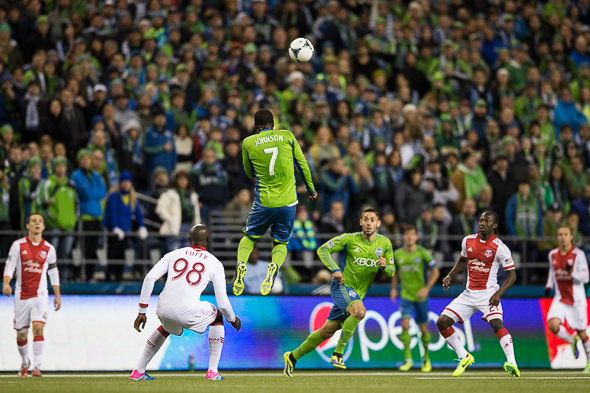 As the most successful business enterprise in Major League Soccer history, the Sounders put money and muscle into 2013 to get an identical identity for their product on the pitch. For the fifth year in a row, they must make the claim the hard way. They are a playoff-quality team, but a championship-quality team? Not off Saturday’s result.

Despite the in-season additions of America’s best player, Clint Dempsey, and international star Obafemi Martins, the best home-field advantage in the MLS and, on this night, a 20-10 lead in shots and 64 percent of the possessions, the Sounders couldn’t find the edge  against the neighborly upstarts from Portland.

Playing their first postseason game in the club’s three-year history, the Timbers were better with their chances, exploiting a weak Seattle backline missing injured DeAndre Yedlin, for a 2-1 triumph. That means Thursday the Timbers, who have not lost in their past nine games, can play defense, which they do well, on their home field, where they have not lost since March, to take a draw and move on to the second round of the playoffs.

The outcome was agonizingly close to a worst-case scenario for the Sounders, who only Wednesday broke a seven-game winless spiral with a win against Colorado. The only reason it wasn’t the worst case was a goal in the 90th minute by Osvaldo Alonso — first in club history in the the opening match of these awkward two-leg, home-and-home playoff series.

They need to play Thursday at the same level and then, somewhere, somehow, catch a break and score one more than the Timbers to force an overtime.

“We didn’t play a bad game — I think it was a really good game,” said Mauro Rosales, who came in as a second half sub. “Having the chances shows that we are in the right positions and moving the right way.

“Making chances for the strikers gives us a way to win the game. This is why we have to keep the same mentality that we had this game.”

Keeping that mentality up front is hard to do when the defense breaks down. This one doesn’t fall on backup goalie Marcus Hahnemann, subbing for starter Michael Gspurning (red card suspension). This one goes upon Jhon Kennedy Hurtado, who lost track of striker Ryan Johnson in the 15th minute, and Djimi Traore, who fell down in the 67th minute, leaving striker Darlington Nagbe alone against Hahnemann.

The center back failures permitted scores for both players in an evening where both hands lack enough fingers to count the prime scoring chances muffed by the Sounders.

“On the second goal, there were a number of times we could win the ball,” said coach Sigi Schmid. “Traore probably needs to stay on his feet there. If you’re going to leave your feet in the box, you need to win the ball.  He knows that, he’s a veteran player.

“Early in the game, we gave too much space to (Jack) Jewsbury (who assisted on the first goal). Adam (Moffat) was tucked in too far, as was Leo (Gonzales). So Jewsbury got a number of touches. You saw in the second half that really disappeared. (On the goal) he got forward, Ryan Johnson makes a good near post run (past Hurtado), we don’t follow him all the way and he hits (Jewsbury’s cross) first.”

On offense, perhaps for the first time since his acquisition, Dempsey was a force. But his near-misses were almost farcical.

“Yeah, I had a free kick, (GK Donovan Ricketts) made a save for a corner,” said Dempsey, beginning a roll call of almosts. “I had another free kick that hit the post. I had a left-footed shot that went just wide. Then I had a header that hit someone on the line. It hit their knee; it ended up being a goal kick but it should have been a corner.  Then I had the header at the end.

“I had my chances tonight. I was happy with the looks that I got and getting touches on the ball. It just seemed like one of those nights where it wasn’t going to go in for me.”

With the season in the balance, it was a poor time for “one of those nights,” failing to win the opening game for a sixth series in a row. Schmid said that the third game in seven nights may have affected Dempsey.

“I think for him it’s not only his shoulder, but also fitness,” he said. “He has played three games now in a week without preseason, so a little bit of fatigue affects your sharpness.

“The way we created our system, I think we create opportunities where we are in dangerous positions. At times we need to be a little more dynamic — take that risk in the final third and take that shot. Maybe go for it a little more.”

Maybe go for it a little more. When a team has nothing to lose, yes, that would be the idea.  After an entire season, better late than never.