The Sounders are essentially down 2-1 at halftime of their two-leg series against the Portland Timbers in the Western Conference semifinals. The clubs meet Thursday. 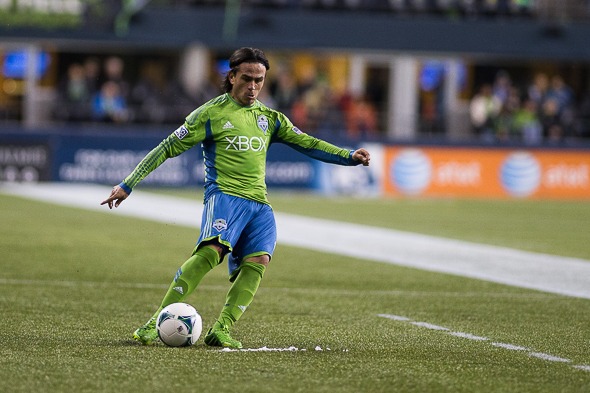 Mauro Rosales, who played effectively off the bench in the first leg Saturday, and the Sounders need a two-goal victory Thursday in Portland to advance to the Western Conference finals. / Drew McKenzie, Sportspress Northwest

Seattle, which will be playing its fourth match in 12 days, is 4-2-0 all-time in the second leg of a two-game series and has won the past four second legs it has played. There is also precedent for first-leg losers to rebound in the second leg and advance to the next playoff round.

On three occasions in MLS Cup history, a team has rallied to advance in a two-game, aggregate-goal series after losing the first leg by one goal at home, which is what the Sounders did in leg 1 (2-1).

In 2006, the Colorado Rapids fell behind 2-1 after the first leg and advanced past Dallas on penalty kicks in the road leg. In 2010, the San Jose Earthquakes overcame a one-goal home deficit to oust the New York Red Bulls on the road, 3-2. Last year, the Galaxy fell 1-0 to San Jose at home, but beat the Earthquakes in the second leg 3-1. LA went on to win the MLS Cup.

But the Timbers have more recent history on their side. Portland produced MLS’s best home record this season, piling up a league-high 38 points while posting the second-longest home unbeaten streak (15 games). Portland has not lost at home since March 9 (to Montreal) and has dropped points in only six of 17 home matches. Portland has allowed 11 goals at home, second-fewest in the league this season.

The Sounders enter Thursday’s match with one win in their past nine matches, a 2-0 victory over Colorado Oct. 30 that enabled the club to survive the knockout round. In the nine, opponents had a goal-scoring margin of 17-8. Seattle’s eighth goal, a 90th-minute strike by Osvaldo Alonso against the Timbers last Saturday, gives Seattle hope heading to Portland for the second leg.

“That goal was very important for us,” said head coach Sigi Schmid. “It gives us an opportunity to go down there and win. When you look at possession, where the ball was on the field, and who created more chances, we showed we can carry the game. We just have to carry the game to them and score.

In the first leg, the Sounders were a threat to score throughout the match, taking 20 shots, six by Clint Dempsey, who banged the ball off the crossbar a couple of times but couldn’t get one in the net.

“He’s been good. He’s been sharp,” said Schmid. “He’s getting good looks. One day, all those things are going to turn the other way. I feel sorry for the opponent when it does.”

The Sounders experienced defensive breakdowns in the first leg, partially because DeAndre Yedlin missed the match with a twisted ankle. Schmid expects him back for the second leg, although he isn’t listed among the probable starters.

“He’ll be ready,” Schmid said. “He’s a young player and he’ll be ready to go on Thursday.”

The Sounders won’t have Lamar Neagle (yellow-card accumulation), but Obafemi Martins, who has been out a month with a groin injury, might be available if needed. Goalkeeper Michael Gspurning, who sat out the first leg due to a red-card booking against Colorado, will also be available, but Marcus Hahnemann is the listed probable starter.

“Our feeling is we were down by a goal at halftime,” said Schmid. “We just got to go down there and play a good second half. It’s a one-off game that we got to win. We lost (the first leg) and I think we hit the crossbar three times. We feel confident we can go there and win.”

“That goal gave us the confidence to go down there and play our game,” Alonso said of his goal. “That goal makes you confident. Better to go down there down 2-1 instead of 2-0. Just one less goal that we have to score to advance to the next round.”

SERIES: Dates to May 2, 1975, when Portland played its inaugural match in the old North American Soccer League. In all leagues, the Sounders and Timbers have met 83 times. Sounders are 42-30-11. Since Portland joined MLS, Portland leads the series 4-1-3 (regular season). Sounders and Timbers went 1-1-1 against each other this regular season. The clubs met most recently Nov. 3 at CenturyLink, the Timbers winning 2-1 in the first leg of the Western Conference semis. Seattle has outscored Portland 12-10 all-time in MLS play, including playoffs.

COMING UP: Winner advances to play the winner of LA Galaxy-Real Salt Lake.