The Huskies (5-3) have four games left, two at home, two on the road, and coach Steve Sarkisian believes that all of the games are “winnable.” UW is a 28-point pick over Colorado. 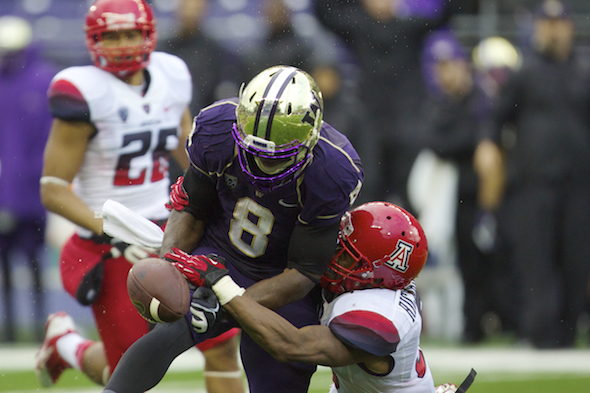 Kevin Smith will be replaced by Damore’ea Stringfellow as Washington’s No. 2 kickoff returner. With Kasen Williams out, the Huskies don’t want to risk Smith on special teams. / Drew Sellers, Sportspress Northwest

After a 1-3 October, in which Washington narrowly lost at Stanford, was bruised by Oregon and Arizona State and rebounded to beat California, the Huskies have remaining four games coach Steve Sarkisian knows will define Washington’s season. Sarkisian said this week that his Huskies, who draw Colorado Saturday, are up for the stretch, which also includes UCLA and Oregon State on the road and Washington State at home.

“They know what’s in front of them,” Sarkisian said. “They understand there will be unique challenges here. Each one of those games will be different, but we’re capable of doing it. I see no reason why we won’t. I think we’re going to play great football.”

Colorado (3-5, 0-5) is winless in the Pac-12, but gave UCLA a game last week in Los Angeles before losing 45-23. Sarkisian has been stressing to his players the importance of not looking past the Buffaloes.

“They are a team that’s playing hard, and they’re trying to find that one game to get over the hump in conference play,” said Sarkisian. “We just gotta make sure we’re not the one.”

The Huskies are 5-0 in games following a bye week during Sarkisian’s tenure.

“We have four games that are winnable if we do it the right way and prepare the right way,” Sarkisian told reporters this week.

Washington will play the final stretch without receiver Kasen Williams, who is out for the season with leg and foot injuries suffered in the Cal game. True freshman Damore’ea Stringfellow probably will be Williams’ replacement.

SERIES: Dates to Nov. 25, 1915, when Washington scored a 46-0 victory over the Buffaloes at Denny Field in Seattle. UW has taken the last four meetings between the schools, including a 38-3 triumph in Boulder in 2012. In that game, Keith Price threw five touchdown passes and Bishop Sankey ran for 139 yards. Colorado has not defeated Washington since 1996. UW and Colorado have twice squared off in bowl games, Washington winning the 1985 Freedom Bowl 20-17 and Colorado taking the 1996 Holiday Bowl 33-21.

UW HEAD COACH: Steve Sarkisian (30-28-0) is in his fifth season. After a 5-7 record in 2009, Sarkisian guided the Huskies to a 7-6 record in 2010 that included a 19-7 victory over Nebraska in the Holiday Bowl. That marked Washington’s first postseason game since the 2002 Sun Bowl. Sarkisian coached the Huskies to subsequent 7-6 marks in 2011 and 2012, earning invitations to the Alamo (Baylor) and MAACO bowls (Boise State). Prior to joining the Huskies, Sarkisian served as a USC assistant under Pete Carroll (2001-03, 2005-08). He also worked as an Oakland Raiders assistant in 2004. Sarkisian played quarterback at Brigham Young University and later played in the Canadian Football League.