The Seahawks, as expected, defeated the Tampa Bay Buccaneers Sunday (27-24), but they needed the greatest comeback in franchise history to get the job done. 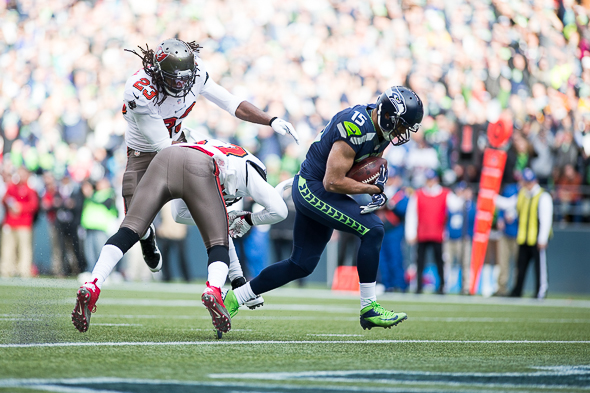 Steven Hauschka kicked a 27-yard field goal 4:48 into overtime to lift the Seahawks to a 27-24 victory over Tampa Bay Sunday at CenturyLink Field in the greatest comeback win in Seattle franchise history. The Seahawks, who trailed 21-0 in the first half, rallied behind Russell Wilson, Marshawn Lynch, Golden Tate and Doug Baldwin to earn an improbable victory over the 0-8 Buccaneers.

The Seahawks extended the best start in club history to 8-1. They also won their 12th consecutive game at CenturyLink and triumphed for the 15th time in the last 17 regular-season games. The home winning streak is the second-longest in franchise history, behind 12 wins in a row from 2004-06.

By overcoming a shocking 21-point deficit to the bottom-feeding Buccaneers, the Seahawks eclipsed by one point their previous largest deficit overcome. The Seahawks surmounted a 20-point deficit Dec. 10, 1995, at Denver (trailed 20-0, won 31-27) and 18-point deficits against Pittsburgh in 1981 and at Oakland in 1997.

After finally pulling even with the Buccaneers at 24 with 1:56 left in regulation on a 10-yard TD pass from Wilson to Baldwin, the Seahawks forced Tampa Bay into a 3-and-out on its first series of overtime, then delivered a heavy dose of Lynch.

Starting the OT series from their 40, the Seahawks fed Lynch for a 10-yard gain to midfield and a three-yard gain to the Tampa 47 before Wilson found Baldwin for a 10-yard pickup to the 37. Lynch pounded for four yards to the 33, for two to the 31, for 14 to the 19 and for 13 to the six. Hauschka took over from there, giving Seattle its second OT victory of the season (at Houston).

The Seahawks never expected to find themselves in a 21-0 hole against the NFC’s worst team, by record, especially at home. But Seattle’s fortunes turned sour on its first drive. After Lynch gained 43 yards on his first four carries, signalling a Seattle romp, the Seahawks put themselves in position to score from the Bucs’ 12-yard line. But a Wilson pass was picked, changing the game’s momentum.

Tampa Bay dominated the remainder of the half, scoring on three consecutive possessions in the second quarter for a 21-0 lead behind rookie quarterback Mike Glennon, who converted 7-of-9 third-down chances, and rookie running back Mike James, who ran right up the gut against the Seahawks without resistance.

Seattle got a late, second-quarter touchdown on a throw from Wilson to Jermaine Kearse, cutting the Bucs’ lead to 21-7 at intermission, and slowly worked its way back into the game in the third quarter.

Glennon, a former teammate of Wilson’s at North Carolina State, threw two touchdown passes while James, a rookie from Miami, ran for a career-high 158 yards.

For the second consecutive week, the Seahawks were helpless at stopping the run. Led by James, the Buccaneers pounded for 205 yards and went 8-for-15 on third-down attempts.

Glennon directed a 10-play, 90-yard drive that culminated in touchdown pass to Ken Wright for a 7-0 lead. James made the first of two key plays on the march, running for 21 yards on a first-and-15. The other: pass interference call against Earl Thomas that set the Buccaneers up at the Seattle 23-yard line. The drive was the longest of the season for Tampa Bay.

Glennon led another scoring drive of 84 yards later in the quarter, finding Tiquan Underwood with a 20-yard touchdown and a 14-0 lead. Glennon converted three third downs during the drive and went 5-for-5 for 57 yards.

On the ensuing kickoff, Kearse fumbled the return and the Buccaneers recovered at the Seattle 31. Glennon immediately found Tim Wright for 27 yards to the Seattle two-yard line. One play later, James took a handoff and threw a startling jump pass to TE Tom Crabtree for a touchdown and a 21-0 lead. That marked the largest deficit of the season for Seattle and also the largest since a 13-point deficit against New England last season.

Aided by a personal foul against Wilson and an interference call that impeded Baldwin, Seattle finally scored on a 16-yard pass from Wilson to Kearse, trimming Tampa Bay’s lead to 21-7 at 1:40. The Bucs were penalized 29 yards on the drive.

Seattle managed 29 yards passing in the first half, 16 on the TD from Wilson to Kearse, and 125 yards of total offense. Tampa Bay had 94 rushing yards in the first half and the Buccaneers converted seven-of-eight third downs.

Tampa Bay began the second half with another impressive drive — 11 plays, 65 yards — that culminated in former Seahawk Rian Lindell’s 33-yard field goal for a 24-7 lead.

The Seahawks pulled to within 10 at 24-14 with five minutes remaining in the third when Wilson scored on a 10-yard run. Wilson and Baldwin kept the drive alive when Wilson, throwing across his body, found Baldwin on a sideline catch for a 19-yard gain to the Tampa 29.

After forcing Tampa to punt for just the second time, Tate returned it 71 yards to the Buccaneers’ 25, setting up Hauschka’s 36-yard field goal and pulling the Seahawks within seven at 24-17.

Wilson completed a 28-yard pass to Baldwin on Seattle’s next drive, the Seahawks’ biggest offensive play of the game, and hit Kearse for a 27-yard gain to the Tampa Bay three-yard line. But then Wilson threw a goal-line interception to safety Keith Tandy, denying Seattle an opportunity to tie.

Following Tampa’s first 3-and-out all day, and after Lynch picked up a first down on three straight carries, Wilson had a 22-yard completion to TE Zach Miller to the Tampa Bay 36. He  completed the drive — 10 plays, 59 yards — with his second TD pass, a 10-yard throw to Baldwin to tie it at 24-24 with 1:50 left.

That set up the overtime period, decided by Lynch’s runs and Hauschka’s foot.

NOTES: Wilson has 19 wins, three shy of Ben Roethlisberger for most wins in the first two seasons of a career . . . Wilson is 12-0 at CenturyLink in his first two seasons . . . Tampa Bay came into the game having scored nine touchdowns all season and tallied three in the second quarter . . . Wilson did not complete a pass to a wide receiver before finding Tate at 9:15 of the third quarter . . . The Seahawks play the Atlanta Falcons Sunday in the Georgia Dome.