After recovering from a sick stomach, Marshawn Lynch was the man on six of the Seahawks’ final eight plays in a harrowing triumph over the winless Bucs. Lesson learned? 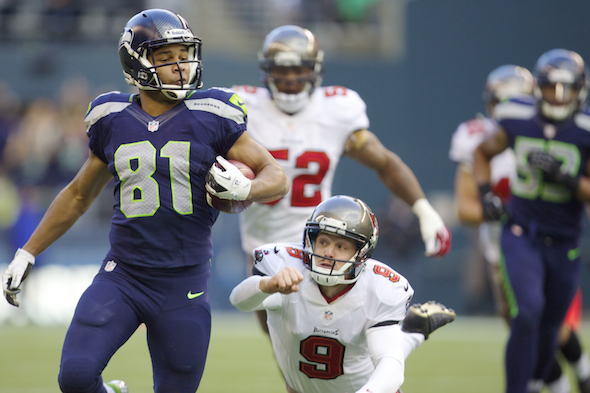 If a Seahawks fan ever wondered what it would be like to experience a double-breaking, 150-foot putt on the 18th green to win a golf tournament, CenturyLink offered a three-and-a-half-hour course Sunday in yelling, “Get in the hole!”

A demanding, draining, perilous, arduous and exasperating afternoon ended with, well, another exhalation. Relief, just like Monday in St. Louis, not exhilaration. The Seahawks, again as bad as a good team can be, did what great teams do: Enough right things to win.

According to fullback Michael Robinson, the Seahawks knew they were going to win. Like a cat who smashes into a closed glass door, the Seahawks staggered away from the collision with Tampa Bay acting as if they meant to do that — going down 0-21 before winning 27-24 in overtime.

“There really is no panic on the sidelines,” said fullback Michael Robinson. “Guys were like, ‘All right, we’re going to go down there and make it happen.’ Talking to the guys the sidelines you wouldn’t have thought we were down by 21 points. I pay attention to that stuff. Guys were all upbeat.”

The hell you say. Fans were throwing up over apartment-balcony rails at the thought of Seahawks losing, and badly, at home to an 0-7 team, and the Seahawks were buffing their nails.

Maybe not quite. At least one Seahawk was having some internal distress too.

“Marshawn got sick in the first quarter,” coach Pete Carroll said. “He just got sick to his stomach from the fast start. It took him awhile to get back. That’s why he wasn’t in there early on . . . the trainers were working feverishly on the sidelines.”

Since Lynch doesn’t talk to media about football, much less his plumbing problems (that is a paid conversation with him), we must accept only his deeds. They were splendid. Lynch ran for 125 yards on 21 carries, including six of the final eight plays in overtime that set up Steven Hauschka’s game-winning, 27-yard field goal.

Lynch’s last two carries produced runs of 19 and 13 yards, as majestic a statement as anyone can make who was not far from unpleasant moments bowing to the porcelain shrine.

“I thought he ran great today,” Carroll said. “He was just a warrior out there. He took advantage of some really good work up front. It was a great finish.”

The justified praise also brings questions. As in: If Lynch is so good, why not give him a chance when the Seahawks had a first-and-goal from the Tampa 3-yard line, trailing 24-17 inside eight minutes to play?

That’s when Wilson was ordered to throw to WR Doug Baldwin on a square-in route. Tampa strong safety Keith Tandy recovered from his bite on play-action to intercept one-handed the pass on the goal line. It was exactly the break Tampa coveted to break Seattle’s home-field momentum and pull off the upset of the NFL season.

“It was a beautifully designed play,” said Baldwin. “I was open.”

“He could have lofted the ball a little better,” said Carroll.”It’s easy to say we we should run the football . . .maybe next time we will.”

“They were fortunate to make a big play,” Wilson said. “I was obviously mad about it.”

All undoubtedly true. And none of it would have mattered if the ball was handed to Lynch.

Sure, it’s easy to second-guess after a bad play happens. But the percentages in that situation are heavily in favor of Lynch over any other option, even when the defense stacks against him. It is particularly so in Seattle’s situation, when its offensive line is nearly in tatters due to injuries.

Already missing both tackles, the Seahawks Sunday lost Pro Bowl center Max Unger to a concussion in the fourth quarter. Earlier in the game they pulled LG James Carpenter after he was getting beat, moving LT Paul McQuistan back to guard and bringing on rookie LT Alvin Bailey.

Any time Wilson can be excused from dropping into the pocket, the opportunity should be taken. Sunday Wilson suffered no sacks, but he was hit six times in passing situations, and also rushed six times for 36 yards. He is the most-rocked QB in the NFL, and even Carroll admitted, “Russell kind of got banged up . . . we’ll see what happens.”

Asked directly how he felt, Wilson said, “I feel good. I got hit pretty good a couple times. You just get back up and keep playing.”

Until, of course, you can’t.

After a terrible start — and a first quarter red zone pick — Wilson became better, finishing with 19 completions in 26 attempts for 217 yards and two touchdowns. The better news for the Seahawks was Carroll’s post-game report that injured tackles Breno Giacomini and Russell Okung looked good in warmups and “we’ll see them next week.”

Even with their return, progress won’t be instant because they’ve missed a lot of work, and they aren’t Unger, and they can’t play guard for McQuistan, Carpenter or J.R. Sweezy.

For two weeks in a row, the Seahawks escaped defeat to heavy underdogs only by late heroics from the defense and the quarterback, each of which showed early game vulnerability.

And now, they are at risk of defeat if Lynch perhaps overdoses on Skittles. Even if the opponents are supposedly softer, the margins can’t get much thinner.