Tampa Bay executed a trap play so well that the Seahawks coach called it “embarrassing,” but was not something beyond repair for a defense that again gave up 200 yards rushing. 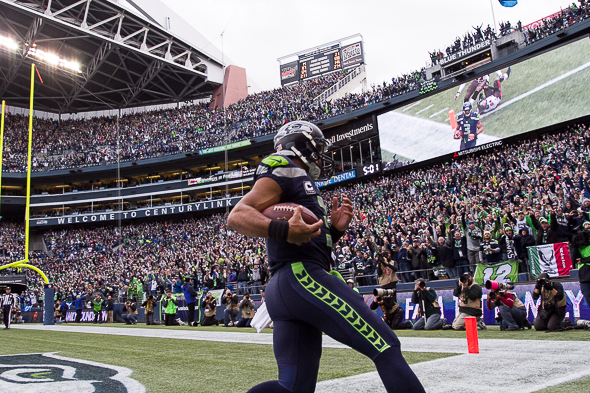 After having opponents rush for more than 200 yards for a second week in a row, coach Pete Carroll doesn’t think a football crisis is upon the Seahawks. But he does admit to being a tad embarrassed, particularly over a trap play that Tampa used Sunday very effectively in threatening to pull off the upset of the NFL season.“Guys have to be in the right spots, reading the (offense) right and playing off the blocks,” he said on his weekly radio show Monday on ESPN 710 radio.  “We got (fooled) on a trap play three times yesterday, which was ugly — right up the middle. It’s a funky little play that looks bad when it happens. The fourth time, we stopped it.

“It’s kind of embarrassing that we can’t stop a little trap play. It’s a difficult play to stop, but (the three first-half touchdowns) were not just missed tackles. We spent the last two hours looking at those plays. We’re digging in on that. We just have to complete plays.”

As the offense works through injuries, the Seahawks’ defense is counted upon more heavily. Which was why Sunday’s 21-0 deficit to a team operating with a backup rookie quarterback and backup rookie running back was worrisome to Seahawks fans. But after the half, Tampa had three points, seven first downs and 141 yards, indicating a learning curve was underway.

“When you have a dead play, it’s gotta be dead,” said Carroll, referring to opponent plays for which the defense has practiced. “On the second play of the game, they (had a gain on such a play), so we didn’t play it as we practiced. We can’t let that happen.”

Carroll allowed as to how a part of the problem has been learning how best to use the Seahawks’ plethora of front-four linemen to maximize what they do best.

“We’ve had about enough of (learning),” he said. “We’re zeroing in on what we need to do. I’m excited about that.”

The other big concern after the 27-24 win, which represented the biggest comeback in Seahawks history, was the health of Russell Wilson. The Seahawks quarterback in the fourth quarter was seen shaking his left hand, as well as limping slightly after a hit.

“He’s sore today,” Carroll said. “He got banged up again. But I just walked out of the training room with him. He had a big smile on his face. He’s fired up. He has an incredible attitude. We’ll take care of him, clean him up and get him ready for the ballgame Sunday.”

Speaking of that 10 a.m. game in Atlanta, the playoff game in January at the Georgia Dome between should serve as a useful reminder for fans about the team’s ability to overcome early deficits. A week after trailing Washington 14-0 at FedEx Field in a playoff game, the Seahawks found themselves down 20-0 at the half to the Falcons. They eventually took a 28-27 lead, only to bollix the the final minute of the game. But coming back has become a staple.

“No question we have the same mind set now as we did in the  year — it’s how you finish — but belief in our ability and the level of our talent and play is much better,” Carroll said. “The faith in trusting the guys around you, and trusting in the preparation, and the belief we can come back, is stronger than it’s ever been.

“The playoff games last year are a part of that. We’re very resilient, very strong-minded.”

“I think he was 15 for 18 in the second half and OT — that’s fantastic,” Carroll said. “The power that he has to convey that everything OK is very assuring.”

Despite the closeness of the games the last two weeks, Carroll had only to look at how well Tampa played Sunday, yet is 0-8, for some perspective.

“Think about how bad it is to be them — poor guys,” he said. “They’re fighting like crazy. It’s good to be a Seahawk.”