The Seahawks (8-1) can tie a franchise record with their fifth road win of the season Sunday against the flailing Atlanta Falcons in the Georgia Dome. 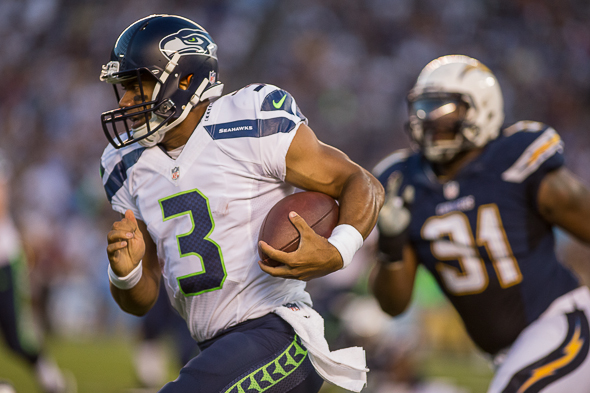 Russell Wilson and the Seahawks have a chance to win their fifth road game Sunday, which would match the franchise record in 2005. / Drew Sellers, Sportspress Northwest

This is hardly the profile of a Super Bowl aspirant: In the past two games, the Seahawks played two teams, St. Louis and Tampa Bay, with a combined record of 3-14. Seattle required a last-play stop to win the first one (Rams) and a record 21-point rally to barely beat the other (Buccaneers) in overtime. Five of the Seahawks’ eight wins have been achieved by a TD or less and they haven’t dominated since waxing now 0-8 Jacksonville 45-17 Sept. 22.

To improve to 9-1, the Seahawks must beat a sagging Falcons team in the Georgia Dome, site of one of the big downers in Pete Carroll’s tenure, a 30-28 defeat in last year’s NFC Divisional playoff game. It was not only that the Seahawks lost, but how they lost.

“I’ve always had certain games that I don’t want to forget, because they kind of keep me going, and this is one of them,” Carroll said of Sunday’s rematch. “I have a lot of those, unfortunately. So it’s just another one of them. About last year’s game, well, there’s the fact that there was 25 seconds left and we didn’t win and we were ahead. We let a game get away that we regret tremendously.”

The Seahawks will not encounter the same team that eliminated them from the postseason  Jan. 13. The Falcons have had to battle through myriad injuries. Notably, WR Julio Jones is done for the year, and WR Roddy White and RB Steven Jackson have missed significant amounts of time (White is expected to return this week).

Atlanta hasn’t been able to adjust. Although the Falcons rank sixth in the NFL in pass yards per game (289.2) — Matt Ryan is completing nearly 70 percent of his passes — they haven’t been able to run the ball (64.4, last in the league) or stop the run. Atlanta has allowed at least 100 rushing yards in each of its past five. Those are the broad failures, but there have been many small ones.

“We’re not winning situational football,” said Atlanta coach Mike Smith. “We haven’t been as good as we need to be on third down, especially on the defensive side of the ball. We haven’t been nearly as good as we need to be in red zone efficiency on the offensive side of the football, and then we’ve been very inconsistent in terms of special teams.

“We’ve put the ball on the ground twice inside of our own 25-yard line in the return game, and you can’t do that at any level of competition and anticipate to play good football. We’ve been consistently inconsistent through the first eight football games in all phases.”

Meanwhile, the Seahawks have been consistent in allowing Russell Wilson to get hit (five times last week, but no sacks) and have developed a sudden vulnerability at stopping the run. Both the Rams and Buccaneers gained 200 yards against Seattle.

“There was some improvement last week,” offensive line coach Tom Cable said. “We still got (Wilson) hit after throws five times, but there was no sacks, which is really cool, and we ran the ball for a bunch of yards. But, we’ve still got to keep him from getting hit. We’re getting better, but we’ve got to play better this week.”

Carroll said Seattle’s run vulnerability issues can be corrected and, in fact, were addressed this week in practice.

“The focus and emphasis has been very direct,” said Carroll. “We’ve identified some things that are really obvious to us and feel that we can take care of them and improve. We’ll see how it goes this weekend.”

“As you can imagine, it’s been a big area of emphasis for us and something we put a lot of time and effort into for this week,” added defensive coordinator Dan Quinn.

Center Max Unger and DT Red Bryant, recovering from concussions, have been ruled out Sunday. With starting tackles Russell Okung (toe) and Breno Giacomini (knee), still not ready to play, the Seahawks will be missing three of their offensive line starters. A fourth, Paul McQuistan, is playing out of position at left tackle.

Lemuel Jeanpierre will start in place of Unger. WR Percy Harvin also isn’t ready and, according to Carroll, might return to practice next week.

In order to bolster the D-line depth, the Seahawks brought up DT Michael Brooks from the practice squad and cut WR Bryan Walters.

SERIES: Dates to Nov. 7, 1976, when the Seahawks, an expansion team, defeated the Falcons 30-13 in the Kingdome. Jim Zorn threw two TD passes and Sherman Smith ran for a score in the second victory in franchise history. Seattle has lost four in a row to the Falcons, including last year’s 30-28 loss at the Georgia Dome in an NFC Divisional playoff game.

SEAHAWKS HEAD COACH: Pete Carroll (66-55 career, 33-24 Seattle) is in his fourth season. In 2010, he directed Seattle to the NFC West title, the Seahawks becoming the first team in NFL history to win a division with a losing (7-9) record. Prior to joining the Seahawks, Carroll served as head coach at Southern California, where his Trojans won seven Pac-10 titles.

FALCONS QUARTERBACKS: Matt Ryan completed 225 of 332 passes for 2,442 yards, 15 touchdowns and 10 interceptions for a passer rating of 91.7. Ryan threw for more than 300 yards in a game four times, with a high of 421 against New England Sept. 29. Ryan threw a season-high three TDs against Tampa Bay Oct. 2