Facing an unproven running back Sunday for the second consecutive week, the Buccaneers torched Seattle for more than 200 yards on the ground. 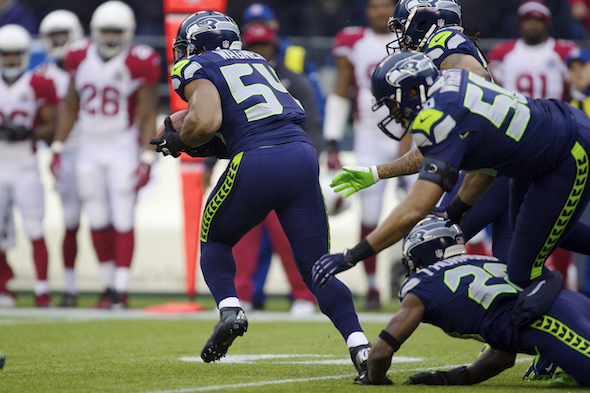 After weeks of dominance, Bobby Wagner and his Seahawks defensive mates have some ‘splanin’ to do. / Drew Sellers, Sportspress Northwest

Identifying the sources of what ails the Seahawks’ run defense hasn’t been a problem. It’s the execution that has coach Pete Carroll rethinking how Seattle can go about fixing a lagging front.

“We think we have some things that we can take care of and improve that are really obvious to us,” he said Wednesday. “We’ll take a shot at that and see how it goes this weekend.”

If that sounds vague, it is so meant. Carroll has specifics to fix a defense that in the past two weeks struggled against a pair of no-name running backs (rookie backup Mike James from Tampa and Zac Stacy from St. Louis), but he’s keeping mum.

It’s been hard enough figuring out how the Seahawks for the first seven weeks gave up 65.6 yards per game, then yielded an average of 190.5. The latter came against a pair of teams ranked in the bottom half of the league in rushing yards.

“It’s a lot of stuff. We’re letting guys slip right out of our arms,” said linebacker K.J. Wright, who made 11 stops in Sunday’s 27-24 overtime win. “Gap control is not as good as it’s supposed to be. When we hit guys, they drive us three or four yards and are just getting extra.

“We just got to hit guys better. When we hit them, make sure they go down immediately.”

Simple enough, though Carroll said the line was also pressing to shed blocks Sunday against the 0-8 Buccaneers. Without specifically pointing out anyone, he hinted that a pervasive lack of assignment discipline helped opponents for the second consecutive week run for more than 200 yards.

Tampa Bay used a mixture of blocking schemes that left Seattle confounded, even if most realized what coach Greg Schiano’s offensive line was trying to accomplish. The Buccaneers’ trap plays, in particular, gave the Seahawks issues.

“We’ve seen the trap play, I just don’t think we played it well,” said defensive end Cliff Avril. “It’s all about being sound when teams do run plays where you can’t jump out of your gap. Or you gotta set the edge, or whatever the case may be.”

“If you get out your gap for one second that guy is going to hit it,” Wright said. “Some guys are peeking into other gaps they’re not supposed to, and the (runner) is seeing that and getting good yards. We have to correct that.

“Guys have to be more accountable, and just get the job done. We’re professionals. We should be able to handle that.”

James Sunday had a career-best 158 rushing yards. His previous high: A 45-yard effort Oct. 20 against the Falcons.

The Seahawks play the Falcons Sunday at the Georgia Dome, site of last season’s 30-28 loss in the second round of the NFC playoffs. In 2013, the Falcons (2-6) feature the NFL’s worst rushing offense (64.2 yards per game) despite two running backs who are typically hard to bring down (Jacquizz Rodgers and Steven Jackson).

Jackson, who spent nine seasons in St. Louis, never ran for more than 100 yards against the Seahawks. Last week in a 34-10 loss to the Panthers, he carried the ball 13 times for 57 yards.

“We just got to get back to what we do,” said linebacker Heath Farwell. “There’s nothing that we haven’t seen throughout the season or in training camp. Executing, playing hard, playing physical, that’s what we do.”

The Seahawks, as has been the case all season, won’t be near full strength Sunday in Atlanta.

Center Max Unger and defensive end Red Bryant are recovering from concussions sustained in Sunday and are questionable.

Carroll said receiver Percy Harvin, who the team activated off the physically unable to perform list in late October, is still day-to-day, as he recovers from hip surgery. He didn’t practice Wednesday but Carroll said he threw him some passes during a morning workout and thought he looked good.

Starting tackles Russell Okung and Breno Giacomini practiced Wednesday, though both likely won’t play against the Falcons. The afternoon session marked Giacomini’s first day back since he went down with a knee injury against Jacksonville in Week 3 that forced arthroscopic knee surgery. Wednesday he was a limited participant.