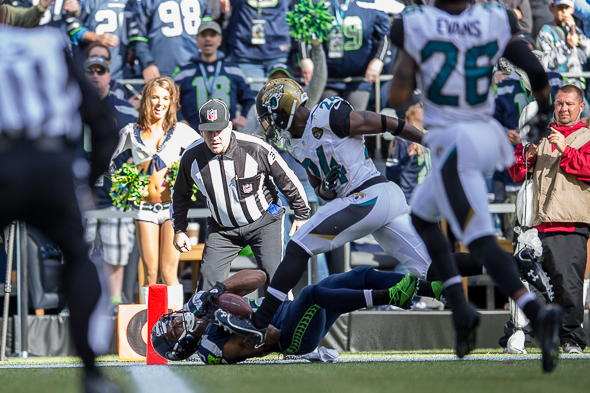 Michael Robinson doesn’t know about NFL rookies having to pay out $32,000 in dinner tabs for veterans. But he does know about $7,000, because that’s what he paid eight years ago as a rookie with the San Francisco 49ers, a bill he said was worth it because it brought him a little locker room peace.

“It happened, but only once,” said the Seahawks fullback. “I didn’t complain about it, so it didn’t happen anymore. If guys go along with it as a rite of passage, and not just (as if) somebody (was) picking on you, it’s all good. I didn’t get bothered again.”

A Seahawk who was bothered Wednesday was WR Doug Baldwin, not about Robinson’s bill but about what was happening to someone he called “a great friend.”

Jonathan Martin, Baldwin’s former teammate at Stanford, was at the center of a national controversy after he left last week the Miami Dolphins, where he was a starting guard. He said he was harassed and bullied — and virtually shaken down for cash — by teammate Richie Incognito, a longtime football badass now suspended and apparently thrown off the team.

“I’m extremely disappointed in the reaction that’s been generated by this,” Baldwin said Wednesday to reporters, referring to the criticism of his friend. “A lot of people might say Jonathan is soft in stepping away from the game: ‘Why don’t you just fight him?’

“Look at him with common sense, and be logical: What option would he have? He could fight Richie Incognito. He could go tell on him (to coaches), which we know in a football locker room doesn’t go over well. Or he can remove himself from the situation and leave the proper channels take care of it.

“I think he made the right, intelligent choice so that he didn’t put himself or Richie in physical danger.”

The takes from the Seahawks locker room are two of many emerging daily from yet another fascinating sidebar story from the national sports passion for the NFL. This one is as old as childhood: Bullying.

What the hell was this episode? Was it merely a prank gone bad, a ritual with deep tradition, a test of manhood, a player unfit for the job or the closing act of a pathological menace?

To hear the Dolphins talk about it Wednesday, they were supportive of Incognito, despite the so-far-undisputed evidence of his voice and text messages to Martin filled with threats to him and his family, racial epithets and other vulgarities.

Miami quarterback Ryan Tannehill was in disbelief because he believed the two linemates were friends. Coach Joe Philbin said he knew nothing about it until Martin left the team and checked himself into a Fort Lauderdale hospital. The NFL is investigating, the players union is trying to defend both parties, and the Dolphins play Tampa on Monday Night Football missing 40 percent of their starting offensive line.

As the maelstrom swirls, Baldwin may be among the few who have spoken to Martin. He defended his friend’s character and lashed out at those who question it.

“I talked to him, to make sure he’s all right,” Baldwin said. “For anyone to say you’re soft or you can’t handle it, it’s ridiculous. It’s disappointing that anyone even has to question (Martin’s character). It’s pathetic.”

Seahawks coach Pete Carroll attempted to inject a little levity, saying he came by his disdain for the hazing tradition in his first NFL year as an assistant coach in Buffalo. A barber hired to give haircuts in training camp was set up by the older assistants to chowder up Carroll’s ‘do.

“The coaching staff got a big kick out of it,” he said, smiling. “It was a bad haircut, I’m telling you. A three-weeker.

“I thought I never wanted to be part of that again.”

Carroll turned serious, talking about the coaching responsibility to act as parents would with their own children who may pick on others.

“We have to do a really good job of not allowing them to make the decisions on how far they can go with stuff,” he said. “If we do (let players have free reign), then we are subject to being disappointed. I think we have to be really strict about what we’re doing, so we had a strict (team anti-hazing) policy about it.

“There’s still a feeling (about) the rites of passage that sometimes exist in a lot of areas of our society. It can be mishandled and misused, obviously. The fact that we’re so aware of it now is really important. People need to be treated well and dealt with properly. It just seems like the right thing to do to not take advantage of people who really don’t have much to say for themselves, don’t have a voice.

“I think this has been exposed enough that we should all make these decisions very easily now. It’s so obvious.”

Many particulars of this episode, such as who else was involved, who knew what, and Martin’s state of mind, aren’t yet obvious. But the general scenario is as old as childhood, and prevalent in many workplaces and schools. Ask most any soldier, cop or firefighter, and some women athletes as well, for a story, and they will have had one or know one.

In any higher-risk job environments where alpha personalities fill the room — not to mention board rooms on Wall Street or Seattle’s Amazon.com HQ — an intimidating  circumstance is a deliberate part of learning about capabilities under pressure.

As Seahawks tight end Zach Miller put it, “Sometimes, it is a test to see what people are made of.”

The sage of the locker room, Robinson, was asked if Martin did the right thing.

“I don’t know,” he said. “We’re two different people. For me, I’m not gonna let that (bullying) happen. But some guys aren’t built like that. You’ve got to respect the guy as a man, as a person. When that doesn’t happen, (hazing) goes too far.”

Robinson also made a pitch for understanding the climate of the locker room, or the firehouse, or wherever people are under intense pressure to perform at a high level, with jobs, maybe lives, at stake. The place where all gather and dish is a kind of private club.

“On all 32 teams, there’s probably a phrase, or a statement, or a gesture, something that can be mistaken, or out of context. Every day. At some point,” he said. “This job is some ways is like any other job, but one way it’s not — we spend a lot of time around each other. Close quarters. We get to know guys on a personal level that isn’t like other jobs. You try to take that away, you take away the essence of football.

Robinson wasn’t defending Incognito, but he was searching for room in the discussion of whether the dark parts in everyone can withstand public scrutiny. Anyone who can draw a bright, sharp line, please share the wisdom.