New Mariners manager Lloyd McClendon talked about a dawning “golden age” of Mariners baseball Thursday, comparing where Seattle is now to where Detroit was in 2006. 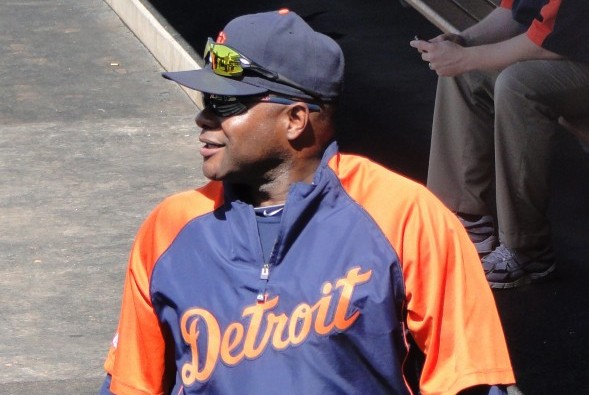 Lloyd McClendon, former batting coach in Detroit, was introduced as the new manager of the Mariners Thursday. / Wiki Commons

I learned something new Thursday, not entirely a novel experience. At mid-afternoon, I found out that I, you, all of us, are about to enter “a golden age for the Mariners.” I would have settled for a comparatively unexciting renaissance, but if it’s to be “a golden age,” bring it on.

While this emphatically sets a record for quickest trip from black hole to golden age, at least in the expansion era, or DH era, or whatever era, I’m not about to cast stones at Lloyd McClendon on his first day on the job. A few pebbles, perhaps, but none aimed at McClendon.

McClendon had his managerial baptism in front of Seattle media and highlighted all the right themes — young team, plenty of potential, tons of positive possibilities, only a dash of patience required — just as a succession of his predecessors did, to little avail. All departed, either voluntarily or involuntarily, with the Mariners no better off competitively than when they arrived.

The difference with McClendon, the seventh Seattle manager in six years and third under  GM Jack Zduriencik, is that McClendon greets a fan base cleaved in half since Lou Piniella’s days and at a time of unprecedented cynicism over the front-office leadership – or lack thereof — of Howard Lincoln and Chuck Armstrong. The gist of that cynicism: The Mariners will never flourish with those two in charge.

One e-mailer to Sportspress Northwest Tuesday, when news of McClendon’s hiring broke, went so far as to opine, “McClendon seems to be a nice guy, but he has to be an idiot for going to work for this team.”

Harsh? Well, McClendon is certainly no idiot, but 12 years without a playoff team, more regressions than progressions, plus dozens of promises and projections unfulfilled, has not only scraped the remaining fan base raw, but left it convinced the immediate, if not long-range future, is next to hopeless.

For many, the Mariners are out of excuses and further pleas for patience will only sound pathetic. No new manager, even one as personable as McClendon, is going to change the culture until results are delivered. The only question is, how many more managers will that take?

Answer: The manager, since the days of Maury Wills and Del Crandall, never has been the problem. These days, evicting Lincoln-Armstrong is the solution.

Certainly McClendon can take care of franchise business only as it applies to him, and – call him crazy if you must — he seemed eager Thursday to accept a job that has felled all those who preceded him. Zduriencik is agog to have him.

“This is a guy,” Zuriencik said, “who is determined to do an outstanding job. For this point in time, where we are right now, this is the right move for this organization.”

For Zduriencik’s sake, it better be.

“I’m extremely happy and honored to be here,” McClendon said. ”I think this is a golden opportunity for me and a golden time for the Mariners. There is nothing but good things ahead. I know the last three or four years have been disappointing, but this team reminds me of the Detroit Tigers in 2006.”

That Motown ensemble went 95-67 and reached the World Series one year after finishing 71-91 and 28.5 games behind in the AL Central. Detroit’s turnaround was even more remarkable than worst-to-first would suggest. In the four previous seasons, the Tigers finished 66-96, 55-106, 43-119 and 72-90, a four-year run of futility even the feeble Mariners have never approached.

Everything changed when Detroit hired Jim Leyland, under whom McClendon worked as the hitting coach and learned much about running a ball club.

McClendon said he sees the same sort of potential in the Mariners that Detroit manifested in 2006, starting with the Seattle pitching staff.

“Come on, this guy is just unbelievable. He’s a tremendous asset and what he does out there is awfully special. When you back that up with (Hisashi) Iwakuma and look at some of the young pitchers (Taijuan Walker and James Paxton), that’s the name of the game. If they pitch well, you’ll love me. If they don’t, you’ll kick my butt out the door. But I like the power arms we have.”

The issue with the Mariners, though, is not so much the pitching as the lack of hitting, specifically abysmal situational batting. The Mariners significantly increased their home run total last season, but squandered more opportunities with runners in scoring position than any team in the American League.

“I think I can help young hitters,” McClendon said. “I’m not a neophyte when it comes to hitting. I think we have a nice core group of young players. We need to harness, encourage and support them. They’ve shown what they can do in spurts. Now they need to show it on a consistent basis (Eric Wedge said the same thing over and over last season) and that comes with experience and confidence. I think we have a chance to become pretty good.

“I will demand that we prepare from both a physical and mental standpoint. One of the things we were not afraid of in Detroit was preparation. Hopefully, we can instill those values here. It’s about commitment, character and integrity and understanding what teamwork is all about. It’s about how you go about your business and how you prepare.

“This is a results-oriented business. The bottom line is winning games, developing young talent while winning games in the process, and hopefully we’ll be popping champagne and having a good time. I think we’ll put a product on the field that fans in Seattle will be very proud of.”

The 54-year-old McClendon doesn’t see, or at least didn’t address, all the negatives in Seattle that long-time Lincoln/Armstrong critics see. That figures, especially on McClendon’s first day on the job: He will now become the most frequent major public face of the organization and will be expected to pound hard on positive themes. That, in fact, will be his primary job.

“Long before the decision was made in Detroit (to hire Brad Ausmus as Leyland’s replacement instead of McClendon), I told Jack (Zduriencik) that this is where I wanted to be. I think I’m in the right place at the right time. We have a chance to be real good on the pitching side and our hitters will get better with more experience. I’m excited about the plan. I love Jack’s (rebuilding) plan. You can see it working. We just have to have a little patience.”

Everybody around here has heard that, ad nauseum. While I wish Lloyd McClendon the best, I fear his “golden age” reference may come back to bite him.