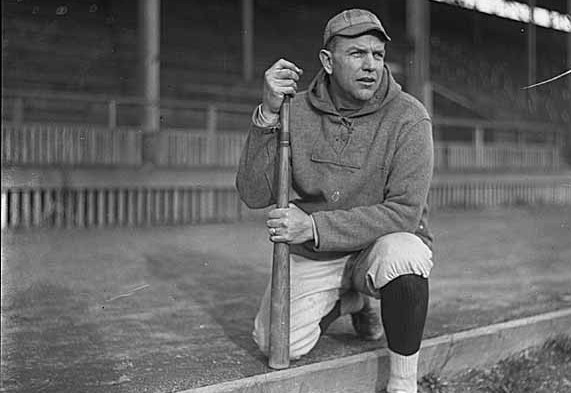 Dorsett V. “Tubby” Graves made his mark as the long-time University of Washington baseball coach, but also tutored Husky football and basketball players. / Courtesy Museum of History and Industry (MOHAI)

The Feb. 5, 1959, resignation of University of Washington rowing coach Al Ulbrickson completed the withdrawal from active duty of an esteemed triumvirate of Washington coaches who, for 40 years, represented the best tradition of Husky athletics. In addition to Ulbrickson, the trio included Clarence “Hec” Edmundson Pavilion, for whom the school’s basketball facility is named, and Dorsett Vandeventer Graves, known to all as “Tubby.”

Edmundson arrived at UW first, from Idaho, is the spring of 1919, tasked initially with mentoring football players as an assistant under Claude “Jump” Hunt. Eventually switching to basketball and track, Edmundson tutored Washington athletes until 1948. 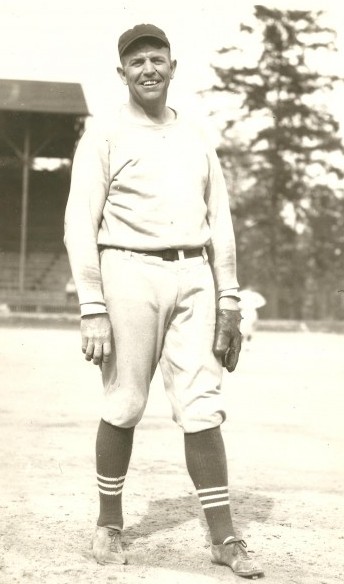 Prior to arriving at Washington, Graves played minor league baseball and served as the athletic director at Alabama and Montana State. / David Eskenazi Collection

Ulbrickson came next, from Montana State, in 1922, and worked through 1946, coaching a variety of sports. A varsity rower under the legendary Rusty Callow in his mid-1920s undergraduate days, Ulbrickson supervised crew athletes from 1928 until his retirement, winning six national titles along the way.

Of the three, Graves proved the foremost exponent of starting his career at the top. Even by present-day standards, with a strong emphasis on youth in positions of responsibility, Graves made a swift and spectacular early climb, beginning in 1911.

A former college football player at Missouri and Idaho, Graves labored as a minor league baseball player in those days, wandering from town to town every summer, eking out a living as a catcher and occasional player/manager. That particular year (1911), Graves toiled for the Class D La Junta (CO.) Railroaders of the Rocky Mountain League, when an unexpected opportunity presented itself.

Already nicknamed “Tubby,” Graves was in the La Junta clubhouse during a road trip to Laramie, WY., donning his baseball togs, when a Western Union messenger arrived with a telegram. It had been sent by Guy S. Lowman, a former teammate of Tubby’s from their football days at Missouri. While Tubby had gone on to play minor league baseball, Lowman had taken a job in the athletic department at the University of Alabama.

According to the telegram, Lowman had resigned his post in order to become athletic director at Kansas State University. Lowman wanted to know if Tubby had any interest in replacing him at Alabama.

“Where is that?” Tubby asked Lowman in a return telegram.

Graves didn’t even know where Alabama was, much less Tuscaloosa, but wired Lowman to say that he was on his way — if he could figure out which way to go.

When Graves arrived, he discovered that he had not only been hired as the school’s athletic director, but its football and baseball coach. Since Alabama employed no other athletic officials or coaches, Graves had become one-man athletic department. He was 24 years old and, he would confide to friends later, “Young and strong and full of vinegar.” 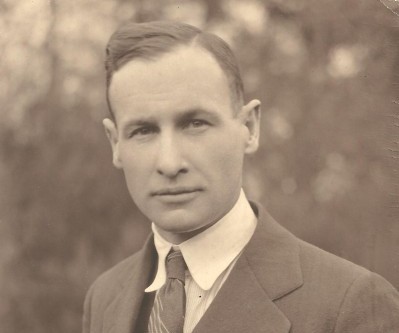 Clarence “Hec” Edmundson, who first encountered Graves at the University of Idaho, was instrumental in Graves joining the Huskies in 1921. / David Eskenazi Collection

Graves rolled with The Tide for four years. His football teams won 21, lost 12 and tied three, and his baseball teams rarely lost. Alabama did not have a basketball program when Graves arrived, so he introduced the school to the sport in 1912 and coached that too. Graves also developed Alabama’s first track and field program, but given his other responsibilities didn’t have time to tutor the thinclads.

“I got a physics professor to coach the track team,” Graves explained, “and I paid him with two season passes to our baseball games.”

By 1914, Graves believed he had done what he could do at Alabama and decided to move on, befitting his life to that point, a professional wanderer.

Born in 1886, somewhere in Missouri (accounts differ on the exact locale), Graves’ early years are obscured by the passage of time. He first showed up in public prints in 1905 as a three-sport star at the University of Missouri – a tackle and fullback in football, a guard in basketball, a catcher on the baseball team.

He mainly made a name for himself as an All-Missouri Valley Conference tackle between 1906-08, the period in which he acquired his “Tubby” sobriquet.

Seems Tubby’s father, Dr. James Francis Graves, had two good friends in the doctoring dodge, a Dr. Dorsett and a Dr. Vandeventer. In tribute to the pair, Dr. Graves christened Tubby, one of his 10 children, Dorsett Vandeventer Graves. Torchy Torrance played baseball at the University of Washington ( 1923 photo) and also served as the athletic department’s graduate manager. In that capacity, he hired Tubby Graves. / David Eskenazi Collection

“Tubby hated both names,” brother David Graves told Georg N. Myers of The Seattle Times in 1960. “I don’t know of anybody who disliked his given name more than Tubby. Well, Tubby played tackle at Missouri. The other tackle was Roscoe Bluck. The Missouri players nicknamed my brother ‘Tubby’ and Bluck ‘Puny.’ Tubby always went by Tubby after that.”

Except for the year he spent at the University of Idaho.

After using up his eligibility at Missouri (the word “eligibility” had not entirely squeezed its way into the athletic dictionary), Tubby still hadn’t had his fill of college football. So he moved to Idaho for the 1909 season and played a year for the Vandals under the assumed name “Walter V. Dorsett.” He earned a letter and made a significant acquaintance, Hec Edmundson, then a miler (and emerging Olympian) on the Idaho track team.

Tubby probably could have extended his college football career indefinitely using additional assumed names – a common practice in those days – but decided instead to make his way as a pro baseball player.

When Tubby departed Idaho, he played six years of professional baseball with Mobile in the Southern Association, Oklahoma City in the Texas League, and several other clubs scattered from Laramie to Winnipeg. He also cut his coaching teeth at the Blees Military Academy in Macon, IL.

“The club that owned me always had a catcher or two on the string when the season ran out, so I’d just ship on to the next junction,” Graves explained.

Tubby continued with baseball even after becoming Alabama’s one-man athletic department, finally giving up his playing/managing career when he moved to Texas A&M University, where he served as head basketball coach (1915-16), assistant football coach (1916-17), and interim head football coach (1918) when the legendary Dana X. Bible was off fighting in World War I. Tubby, whose 1918 Aggies went 6-1-0, also managed the A&M baseball team. Graves served as an assistant football coach under Enoch Bagshaw from 1921-29, a period in which the Huskies went to two Rose Bowls. / David Eskenazi Collection

During the five years that Bible and Graves directed A&M’s football fortunes, the Aggies were undefeated and scored on only twice. Graves called the plays.

Another important outgrowth of Tubby’s time at College Station was the beginning of his friendship with Edmundson. The two met at Idaho in 1909, and they became friends after Edmundson arrived at A&M to supervise the track team, his first full-time coaching job. Edmundson wanted to return to the Northwest, convinced Graves he ought to give it a try, and promised that should he ever find a job there he would try to find a place for Graves.

Before that happened, Tubby heard from Guy Lowman again. Lowman, who had lured Tubby to Alabama, made a new pitch: Montana State had an opening for an athletic director. Tired of Texas, Tubby dashed off a telegram and, at Lowman’s recommendation, Tubby became the Bozeman school’s athletic director and head coach in three sports. That was the summer of 1920.

Tubby’s two football teams at MSU went 5-5-1, giving him a career coaching mark of 34-18-4 that Tubby might have embellished if he hadn’t heard from Edmundson that UW had a job opening. Seizing the opportunity, Tubby signed on – UW graduate manager Torchy Torrance negotiated the contract — primarily as an assistant football coach under Enoch Bagshaw, freshman basketball coach under Edmundson, and head baseball coach. That put an end to Tubby’s athletic wanderings. 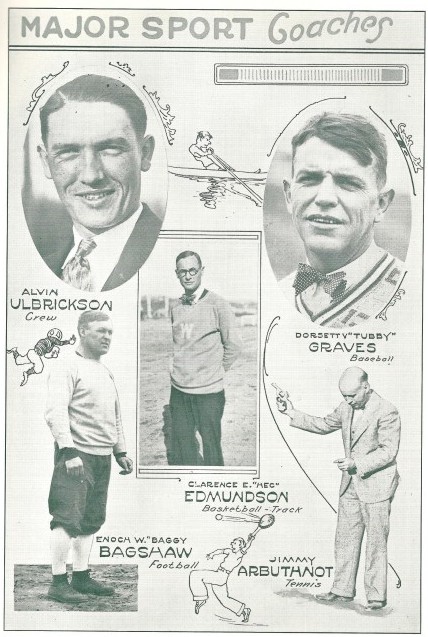 One of Tubby’s most notable contributions to the football program occurred in the 1924 Rose Bowl against Navy. Washington managed a 14-14 tie after trailing 14-7. UW forged the knot on a play suggested by Tubby, a guard-eligible pass that worked when quarterback Fred Abel passed to guard Jimmy Bryan for the equalizer.

Bagshaw (fired), Jimmy Phelan (fired) and Ralph “Pest” Welch (fired) all came and went, but Tubby, unlike assistant coaches today, served under each. While working for Welch, Tubby’s main task was to scout the opposing team and draw up a game plan.

Along with Edmundson, Tubby made a lasting contribution to Washington state’s athletic heritage when, in 1923, they co-founded the Washington state high school basketball tournament patterned after the one Edmundson created in Idaho.

The University of Washington sponsored the first tournament, held in 1922-23, whose associated costs were born entirely by Edmundson and Graves. Their purpose: to create some press for the university that they hoped would pay off in recruiting. Edmundson and Graves operated the tournament through 1925 when it was taken over by the Washington High School Athletic Association.

When Graves retired as a full-time coach, he became a special assistant to the UW athletic director, an unpaid position in which his primary duty was counseling incoming athletes. He held that position until his death, but it wasn’t all that he did.

In 1949, just weeks after his wife of 35 years, Medora Taylor Graves, died, the Puget Sound Sportswriters and Sportscasters Association met to bestow the first Charles E. Sullivan award on the individual who had contributed most to athletics in the Northwest. The group had half a century worth of candidates to consider and wound up selecting Graves by unanimous vote.

Five years later (1954), the Texas Legislature, apparently not having forgotten his contributions to Texas A&M, appointed him an honorary state colonel.

On May 18, 1956, the Washington State Horse Racing Commission named Graves  presiding steward at Longacres after he had served as an associate steward for eight years. At the same time, the commission named him chief steward at Playfair Race Course in Spokane. 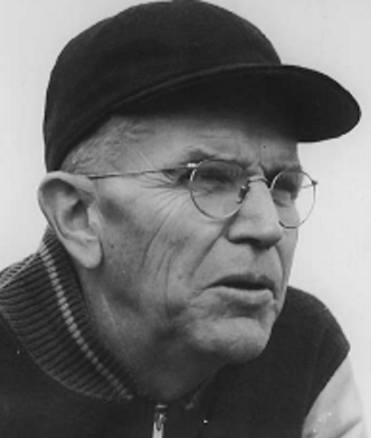 “As baseball coach at Washington, ex-football assistant, a sharp scout, and a leader, he made fast friends everywhere,” wrote columnist Harry Missildine in the Spokesman-Review after Tubby’s death.

“Tubby always had a knack of leavening a sour story with a pinch of spice. His delicious draw, which never lost its touch of Missouri, was made for story telling,” wrote Jack Hewins of The Associated Press.

“He gave the University of Washington exactly one-third of a century of leadership, loyalty and laughter. It would take from here to Christmas to list the thing he’s done for the state and Northwest, for the school and for the men whose lives he touched indelibly as a coach in three sports, especially baseball.”

Dorsett Vandeventer Graves was enshrined in the Husky Hall of Fame in 1980 in the second class of inductees.

Many of the historic images published on Sportspress Northwest are provided by resident Northwest sports history aficionado David Eskenazi. Check out David’s Wayback Machine Archive. David can be reached at (206) 441-1900, or at  seattlesportshistory@gmail.com