The Seahawks improved to 9-1 with their 33-10 victory over the Falcons Sunday. They return to CenturyLink Field next week to face the Minnesota Vikings. 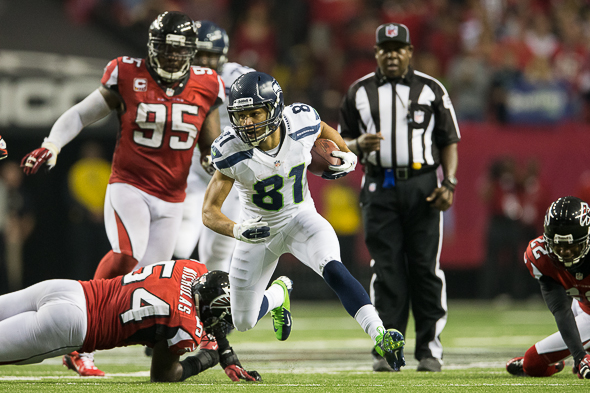 None of the issues that bedeviled the Seahawks in recent weeks — inability to protect Russell Wilson, inability to stop the run — manifested Sunday in the Georgia Dome, where Seattle struck early and crushed the Falcons 33-10 in its most dominant performance this season.  The fourth win in a row improved the record to 9-1, extending the best start in franchise history.

The Seahawks, avenging a loss to the team that knocked them out of the 2012 playoffs, have won 16 of their last 18 regular-season contests, and also took their fifth road game of this season, matching the club record set in 2005, the only campaign that resulted in a Super Bowl appearance.

The game’s only downer for Seattle was an apparent right groin injury to CB Brandon Browner, who left in the first half and did not return.

Wilson threw touchdown passes to Jermaine Kearse and Golden Tate, Marshawn Lynch ran for 145 yards and a touchdown, and Steven Hauschka kicked four field goals as the Seahawks rolled up 490 yards of total offense while holding Atlanta to 226. The Seahawks had seven plays of 20 yards or longer to Atlanta’s two, one of which ended with Seattle stripping the ball and recovering the fumble.

Wilson is 20-6 as a starting quarterback, two wins shy Ben Roethlisberger’s NFL record for most victories in the first two seasons of a career. Wilson completed 19 of 26 for 287 yards and no interceptions for a passer rating of 134.6. The Falcons sacked Wilson just once.

Lynch, delivering his 25th career 100-yard rushing game, had a chance to set a career high (153 vs. Cincinnati in 2007), but sat out a good portion of the fourth quarter after the Seahawks put the game away.

Tate not only caught six passes for 106 yards (second 100-yard receiving game of his career), but returned three punts for 55 yards and helped set up a TD with his second.

The Seahawks had allowed St. Louis and Tampa to rush for 405 yards combined the past two weeks, but held Atlanta to 64. Seattle also held the Falcons to 4-for-12 on third downs. In the first 21 minutes of the second half, Atlanta had just one possession.

Hauschka hit a 43-yard field goal early in the second quarter for a 6-0 Seattle lead. The sore was set up by a 23-yard completion from Wilson to Kearse, who came down with the ball directly in front of former University of Washington teammate Desmond Trufant, Atlanta’s first-round pick last spring. Moments later, Tate made a spectacular sideline catch at the Atlanta two-yard line, but the reception was disallowed on review when it was determined Tate came down out of bounds.

Atlanta responded with its best drive of the half, including a 17-yard run by Jacquizz Rodgers and a 12-yard scramble by Ryan, setting up Matt Bryant’s 53-yard field goal that trimmed Seattle’s lead to 6-3.

Lynch immediately knocked off a 37-yard run, setting up a 43-yard flea-flicker TD from Lynch to Wilson to Kearse, giving the Seahawks a 13-3 lead. On the play, Wilson pitched to Lynch running right. He tossed back to Wilson, who found Kearse in the end zone.

Three minutes before halftime, Wilson tossed a screen to Tate, who took it for a 46-yard gain to the Atlanta 30, setting up Hauschka’s third field goal, a 44-yarder that gave Seattle a 16-3 lead.

Following Tate’s 32-yard punt return at 1:03, Wilson directed a 60-yard drive, throwing a six-yard TD to Tate for a 23-3 lead. Tate made a spectacular, one-handed catch in the corner of the end for the score, his fourth TD of the season.

The Seahawks scored on five of six possessions in the first half and had five plays of more than 20 yards. Seattle held the Falcons to 46 yards rushing.

In the first drive of the second half, Hauschka kicked a season-long 53-yard field goal, his fourth of the game, extending the Seahawks’ lead to 26-3.

Atlanta put together its best drive midway through the third. Abetted by a questionable, 15-yard personal foul on Michael Bennett for sacking Ryan around the ankles, and an offsides call on Chris Clemons, the Falcons went 82 yards in 13 plays, Ryan hitting rookie Darius Johnson for a 12-yard touchdown.

Wilson and Baldwin collaborated on a 26-yard hookup to open the fourth quarter as the Seahawks put together their best sustained drive, 12 plays covering 80 yards that ended with Lynch’s one-yard run.

NEXT: The Seahawks return to CenturyLink Sunday to face the Minnesota Vikings, followed with their bye week.