All Seahawks Need To Do Now Is Hold Serve

If the playoffs started today, the Seahawks (9-1) would hold the No. 1 seed in the NFC and enjoy home-field advantage throughout the postseason. 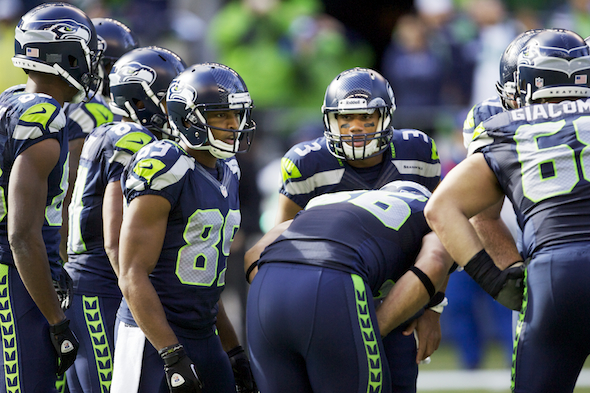 The Seahawks need only to hold serve at home in order to match the best record in franchise history, 13-3, achieved by the 2005 team that went to the Super Bowl. / Drew Sellers, Sportspress Northwest

By defeating Atlanta 33-10 Sunday in the Georgia Dome, the Seahawks avenged (as we heard ad nauseam)  a 30-28 loss to the Falcons in their NFC Divisional playoff game. What we didn’t hear was that only one other NFL team in the past 20 years recorded a road win by a margin as large as Sunday’s (23 points) against a team that ousted it from the previous season’s playoffs. Guess what?

That other team was the Seahawks. Following the 2010 regular season, Pete Carroll’s first, they lost to the Chicago Bears 35-24 in the NFC Divisional round, and then came back a year later at Soldier Field and knocked off the Bears 38-14, a 24-point swing.

Seattle’s victory Sunday, a record-tying fifth on the road (also 1984 and 2005), represents a remarkable turnaround for the Seahawks away from CenturyLink Field, even if it did come at the expense of a 2-7 Atlanta team struggling with injuries.

Since opening the 2012 season with five road losses in six attempts, the Seahawks have played 10 road games, including last year’s playoffs. The Seahawks are 8-2, the losses coming to Atlanta in the playoffs and to Indianapolis in Week 5.

At 9-1 and with a 2½-game lead in the NFC West over San Francisco after the 49ers’ 10-9 loss to Carolina Sunday at Candlestick, the Seahawks would own the No. 1 seed in the NFC if the playoffs started today, meaning home-field advantage throughout the playoffs. These are the current NFC seeds:

To the notion that the Seahawks reached 9-1 at the expense of a battered Atlanta team, they did so without a full complement of their own weapons. Seattle played without three offensive line starters (T Russell Okung, T Breno Giacomini, C Max Unger) as well as WR Sidney Rice (out for the year). During Sunday’s game, the Seahawks lost starting corner Brandon Browner early with a strained groin and have yet to unleash WR Percy Harvin.

Of course, the playoffs don’t start today, but having played six on the road, the Seahawks have four more at home, where they have not been defeated since drafting Russell Wilson. The four home opponents, Minnesota (2-7), New Orleans (7-2), Arizona (5-4) and St. Louis (4-6) are a combined 18-19, and Seattle has already defeated the Cardinals and Rams.

If the Seahawks win their remaining home games and lose both on the road, they would finish 13-3. San Francisco would need a seven-game, season-ending winning streak to match that.

In the unlikely event of such a run, the first tiebreaker would be wins within the division. Seattle is 3-0 in the NFC West with three division games remaining. San Francisco is 2-1, also with three looming, including the big one vs. the Seahawks Dec. 8 at Candlestick Park.

While it’s too soon to predict how it all will play out, the Seahawks can probably afford three losses, providing one isn’t to San Francisco, and still win the division. Three Seattle wins, over the right combination of opponents, New Orleans Dec. 2, San Francisco Dec. 8, and either Arizona Dec. 22 or St. Louis Dec. 29, would also net the Seahawks a division title and home-field advantage.

Seattle’s games against the Saints and 49ers are the two biggest remaining, given their combined record of 13-5 and current playoff seeds, No. 2 and No. 6, respectively. But with St. Louis having crushed the Colts Sunday and taken Seattle to the last play two weeks ago, the regular-season finale between the Rams and Seahawks at CenturyLink figures to have some real juice.

This is how it sets up for current NFC seeds through Week 10:

New Orleans has the toughest slate, facing seven with a combined mark of 33-23, including four of the current NFC seeds — vs. San Francisco, at Seattle, and Carolina twice.

Speaking of Carolina, the Seahawks caught a break by opening the season against the Panthers on the road and squeezing out a 12-7 win. After starting their season 1-3, the Panthers have put together a five-game winning streak. Add that to their upset of the 49ers Sunday, and Seattle’s Week 1 win looks a lot bigger now than it did then.