Seahawks get to roll out full arsenal for Vikings

The Seahawks (9-1) have several players returning from injury, including Percy Harvin. Getting ahead early against the Vikings may help spread playing time ahead of the bye week. 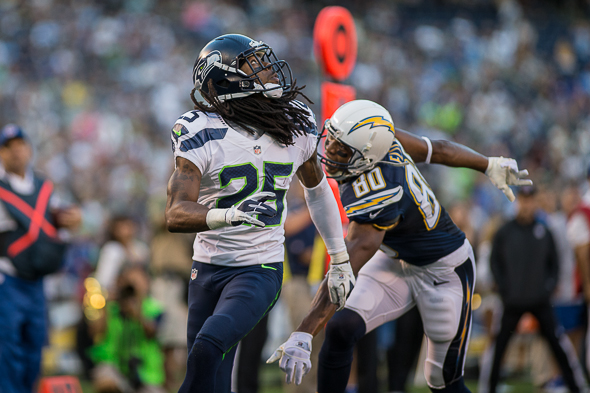 Seahawks cornerback Richard Sherman has 16 interceptions since 2011, most in the NFL over that span. / Drew Sellers, Sportspress Northwest

The Seahawks rang the bell loudly last week in Atlanta (won 33-10) after enduring weeks of criticism for not winning convincingly enough. Next task: Adrian Peterson and the Minnesota Vikings, who are 2-7 and feature the NFL’s 30th-ranked defense, but are coming off a 34-27 victory over Robert Griffin III and the Washington Redskins.

Off to the best start in franchise history at 9-1, the Seahawks will be seeking a sixth consecutive victory, their 13th in a row at CenturyLink Field and their 16th in 18 games. Seattle throttled the Vikings 30-20 one year ago at the Clink despite Peterson’s 182 yards and two touchdowns.

In addition to the positive numbers, the Seahawks are getting close to maximum strength. Offensive tackles Russell Okung and Breno Giacomini returned to practice this week and so did Pro Bowl center Max Unger and DE Red Bryant, both of whom missed last week’s game with concussions.

Okung was activated Saturday and third-string quarterback B.J. Daniels was cut. Daniels’ departure suggests that the Seahawks think CB Brandon Browner, who strained a groin muscle against Atlanta, may not have a season-ending injury.

Regarding the game, the Seahawks have another consideration: With a bye week next week, the Seahawks could elect to hold out their injury returnees Sunday, or play them on a limited basis, giving them additional time to heal.

“It’s two weeks that we could buy. We have that in mind,” coach Pete Carroll said. “We’re going to take the information and evaluate each guy and figure out what it means, knowing that we’re OK. We’re OK where we are, so we’re not pressed into making a decision hastily.”

“He’s such an explosive player and has the ability to play multiple positions,” Frazier said of Harvin, who spent his first four pro seasons in Minnesota. “We’d line him up, not only as an outside receiver, we’d put him up in the slot. He’d line up in the backfield. Once he touched the ball, he was a threat to score every time.”

Even with that good news, and the Seahawks coming off what he described as “our best overall performance of the season” against Atlanta last week,  Carroll said his team won’t look past the Vikings.

“I think there was a great lesson in underestimating a team, based on record, with what happened to us against Tampa Bay — they played great against us,” said Carroll. “Minnesota is a good football team. They just have not been on the right side of the scores. These guys played us tough last year. We respect the heck out of this group. So we shouldn’t fall into thinking that they can’t play really good ball. We’re not doing that.”

Peterson always gives the Vikings a chance. His 786 rushing yards rank fourth in the NFL, his nine TDs are first and his 87.3 yards per game rank third.

“They’re amazing,” Carroll said, adding, “35 yards is the average for Cordarrelle Patterson, which is extraordinary, and he is a fantastic returner. I’ve watched every one he’s had, and he attacks and flies up in there. He’s hard to get on the ground. He’s a big guy with great speed.

“Marcus Sherels is really fast, and it’s obvious now that he’s a big deal. We have a good kickoff coverage unit, we have a really good punt coverage unit, and we take a lot of pride in doing that right. It’s a great matchup, and we’ll find out where we stack up against the best guys in the league.”

Former Seahawks tight end John Carlson, Seattle’s second-round pick in 2008, has suddenly become a big part of Minnesota’s offense and is coming off a seven-catch, 98-yard effort (both personal bests) against the Washington Redskins.

The Seahawks haven’t won six straight in a season since a franchise-record 11-game winning streak in 2005.

“We’ve got more games we have to win and we have a lot of work to finish it out,” Carroll said. “We have a chance to do something special in this division, and we need to take advantage of every opportunity.”

SERIES: Dates to Nov. 14, 1976, when the Vikings recorded a 27-21 victory at Metropolitan Stadium in Minneapolis. For Seattle, the big play of the game was Jim Zorn’s 80-yard touchdown pass to Steve Raible. The teams have split their past four meetings, Seattle taking the latest 30-20 Nov. 4, 2012. Russell Wilson threw three touchdown passes.

SEAHAWKS HEAD COACH: Pete Carroll (67-55 career, 34-24 Seattle) is in his fourth season. In 2010, he directed Seattle to the NFC West title, the Seahawks becoming the first team in NFL history to win a division with a losing (7-9) record. Prior to joining the Seahawks, Carroll served as head coach at Southern California, where his Trojans won seven Pac-10 titles.