The return of Percy Harvin, who comes with high risk and high reward, echoes a similar scenario endured by the Sounders with star Clint Dempsey. It’s a little different, but . . . 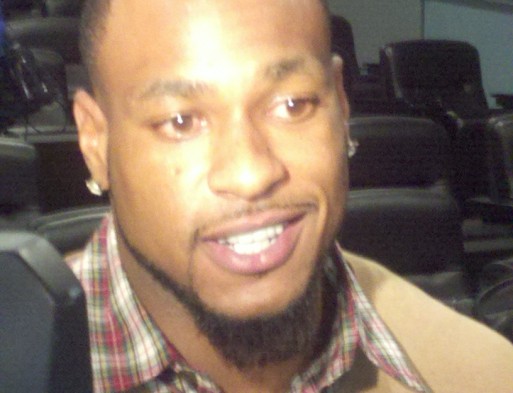 Percy Harvin appears ready to get on an NFL field for the first time in a year Sunday. / Art Thiel, Sportspress Northwest

One of the trickier sports-management headaches is about to arrive in Pete Carroll’s frontal lobe — attempting to improve a team near the top of its game by adding a new superstar player in mid-season. If the Seahawks coach needs any instruction on how not to handle it, he can call Adrian Hanauer, Sounders general manager.Hanauer told reporters Monday that the Sounders’ locker room became a tense place after the introduction of Clint Dempsey, the American star bought from his EPL  team when the Sounders were on the rise in August.

Dempsey played in 12 matches, starting nine, in which the Sounders went 3-5-1, Dempsey contributing one goal and one assist in 921 minutes as the highest-paid player in MLS. Worse, the more he played, the less the results. The Sounders had a late-season screamer of a collapse, losing nine of their final 10 matches, including a pair in the playoffs to the demon spawn Timbers of Portland.

Obviously, there were more factors in the flop than the collision of egos surrounding Dempsey’s arrival. There was also a difference with the Seahawks in the circumstances — Dempsey was a surprise to everyone, especially including players. The Seahawks traded much treasure in March to acquire WR Percy Harvin from Minnesota, conveniently the foe Sunday at the Clink.

He was a part of the plan, and the workouts, prior to his hip injury that required surgical repair in August. Now, he’s back on the 53-man roster, and if all goes well in practice this week, will see his first Sunday action in a calendar year.

The transition will be helped by the coincidence of a season-ending injury to fellow WR Sidney Rice, purportedly Seattle’s top downfield and red-zone target. So the Seahawks would seem to have a tactical need for Harvin’s remarkable skills, even though he is a different type of receiver.

But the Seahawks are also an NFC-best 9-1 and coming off a large road win in Atlanta in which WR Golden Tate and WR Jermaine Kearse had big impacts in the best game the offense has had this season. Obviously, one productive game doesn’t resolve much regarding the offense’s immediate future, and the investment in Harvin was for the long term.

But this season is shaping up as an epic chance for the Seahawks to take it all. Every discerning sports fan in town understands that the Seahawks are young, deep and talented, virtues that can erode quickly with each season. They just beat a team in the Falcons who, after eliminating the Seahawks last year, looked to be in good competitive shape for the next season or two. Instead, they are 2-7 and groping to find the doors the Seahawks blew off Sunday.

Even the Seattle schedule has turned out relatively kind, as Steve Rudman pointed out here. Four of the Seahawks’ final six games are at home, where they seemingly are undefeated since pterodactyls filled the skies, while the division-rival 49ers executed a face-plant Sunday at home against Carolina.

Nothing can be assumed, of course, except for one thing — Seattle sports fans are aching so much for a championship, the radiation registers on Geiger counters.  Thousands are showing up to the Seahawks’ road games, to the astonishment of all who bear witness. Even Hanauer, a Seattle native, picked up on the vibe from his Sounders perch.

“Certainly this is the town in this country . . .  (where) it feels like there is more pressure in  to win a championship than any other town,” he said. “I feel that pressure as a general manager, as an owner, as a fan.”

The Sounders scuffed what seemed like a good chance for an MLS title, and the disappointment in the soccer crowd is sharp enough to strip paint. Now the Seahawks are not only local but national darlings, a good story with amusing personalities, for much higher stakes, so that each game becomes an intense communal search for greatness, or anguish over shortcomings.

Into the adrenaline stew is thrown Harvin, who in his time in Minnesota proved to be a volatile, controversial figure. At 25, he begins his sixth professional season astride  great confidence by his coaches, a big investment by ownership and greater expectations from ticket buyers. With a scar on his repaired hip.

The unspoken message? Percy, don’t screw it up.

“It’s a very upbeat feeling around our locker room right now,” Carroll said Monday. “These guys are excited to see (injured starters) Russell Okung and Breno Giacomini back in. (Center) Max Unger comes back to us this week. If everything works out right during the week, there’s a chance that all three could play this week.

“The potential of Percy just adds to that. So the push is really on right now; a very intense time during the season.”

Carroll has a good track record of managing characters with tumultuous histories. But this is a rare circumstance — adding a premier (and initially tender) talent in mid-season of an already soaring year in a market that longs for championship reward.

The Seahawks saw how it played out with their futbol brethren who share the civic playpen. The Sounders were the footie epitome of the wisdom offered by the comic-strip immortal, Pogo: “We have met the enemy, and he is us.”