After an embarrassing home loss Thursday to the UC Irvine Anteaters, Lorenzo Romar’s Washington Huskies will try to rebound against the Eastern Washington Eagles. 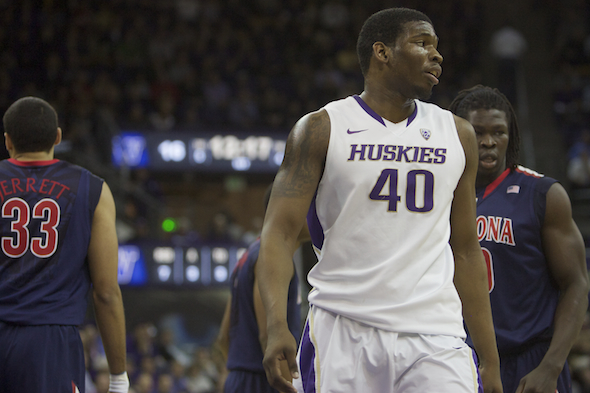 In Washington’s 86-72 loss to UC Irvine Thursday, the Huskies had no answer for 7-foot-6 freshman Mamadou Ndiaye, who scored 18 points and blocked nine shots, couldn’t keep Irvine’s guards out of the paint, couldn’t adjust to the absences of Jernard Jarreau and Desmond Simmons, and had a flat second half.

Somehow, all that still doesn’t adequately explain how the Huskies could lose at home to an 0-2 Anteaters team that entered the game with a 169 RPI. But Romar gave it a whirl after Washington’s most absurd Alaska Airlines defeat since the South Dakota State Jackrabbits hopped into town Dec. 19, 2011 and blew away UW 92-73.

“As we go on, some players have to adjust to those players being out,” Romar said, referencing Jarreau’s season-ending ACL tear and Simmons’ potential two-month absence with a knee injury. “Jernard is so good against zone, in the middle of the zone. He gets the ball and is such a good playmaker and can knock the shot down. We didn’t have that against UC Irvine and it hurt a little. We were tentative. Desmond and Jernard are also good defenders down there. We’re going to have to step up. There are other teams who have good front lines and we have to do a better job.”

The Huskies have a chance at quick redemption when they host Eastern Washington Sunday at Alaska Airlines Arena as part of the on-campus portion of the 2K Sports Classic. In addition to playing better defensively, the Huskies need some offense besides C.J. Wilcox, who has averaged 23 points per game through Washington’s first two contests.

Following the Eastern game, the Huskies head to New York City for the title rounds of the 2K Sports Classic. Stepping up in class, they will play Indiana Thursday in Madison Square Garden and then take on the winner of Connecticut-Boston College.

SERIES: Dates to Dec. 13, 1989, when Washington won 74-58 in Seattle. The Huskies have taken the last seven in the series, most recently a 98-72 decision in 2011. In that game, Justin Holiday scored a career-high 18 points and teammate Matthew Bryan-Amaning added 14 and 10 rebounds.

UW HEAD COACH: Lorenzo Romar (331-218 overall, 238-130 UW) is coming off a year in which the Huskies finished 18-16 overall and ended the year with a loss to Brigham Young in the National Invitation Tournament. Romar has taken the Huskies to the NCAA Tournament six times and won three Pac-10 Tournament titles (2005, 2010, 2011).