Schmid Gets A Thumbs Up, Will Return In 2014 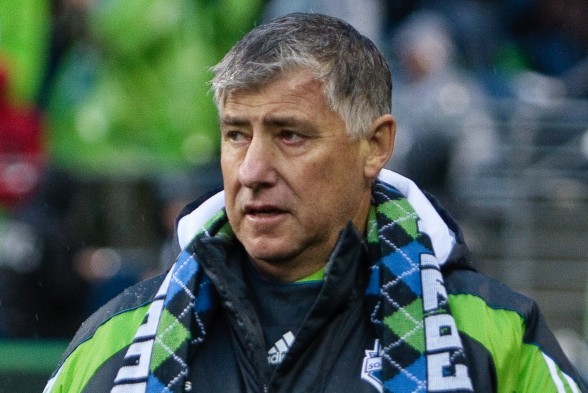 Sigi Schmid drew a vote of confidence from Sounders majority owner Joe Roth Thursday and will return to coach the team in 2014. / Sportspress Northwest file

Despite speculation that Sounders coach Sigi Schmid might be shown the door after the team finished the season with only one win in its final 10 matches, majority owner Joe Roth Thursday announced that Schmid will return for a sixth season in 2014, citing Schmid’s “resume and accomplishments.”

“Adrian Hanauer and I met to review all team aspects of the organization. After a thorough evaluation, there is no question that Sigi Schmid is the right man to lead our club,” Roth said in a prepared statement. “While we are not happy with the way we finished, Sigi’s resume and accomplishments speak for themselves. We have been to the playoffs five straight years, one of just three teams to have done that.

“Once you make the tournament you give yourself a chance to win the MLS Cup. Sigi has won two MLS Cups and it won’t be long before he does it here in Seattle. We continue to strive for excellence and we will do everything we can and give him all the resources possible to make that a reality.”

After winning a knockout game against the Colorado Rapids at CenturyLink Field, the Sounders dropped a two-leg, aggregate-goal series to the Portland Timbers by a combined margin of 5-3, preventing Seattle from advancing to the Western Conference finals.

The Sounders had a five-match winning streak from Aug. 25-Sept. 13. Then, after draws with the LA Galaxy and New York Red Bulls, lost four in a row. The Sounders had one win (Colorado), two draws and two losses in their final five contests.

Meanwhile, SI.com reported that the Sounders and MLS are “shopping” Seattle forward Eddie Johnson around the league. Johnson’s contract paid him $156,000 last season and it’s unlikely it can be renegotiated to pay him significantly more. Fitting  Johnson under the salary will be difficult without making him a designated player, which is why he might be on his way to another MLS team.

Johnson created a stir Aug. 31 for a goal celebration against the Columbus Crew, when he mouthed the words “pay me,” after tallying the lone goal in a 1-0 Seattle victory.