Sunday’s Seattle-Minnesota game features two of the NFL’s marquee backs, Marshawn Lynch of the Seahawks and Adrian Peterson of the Vikings. 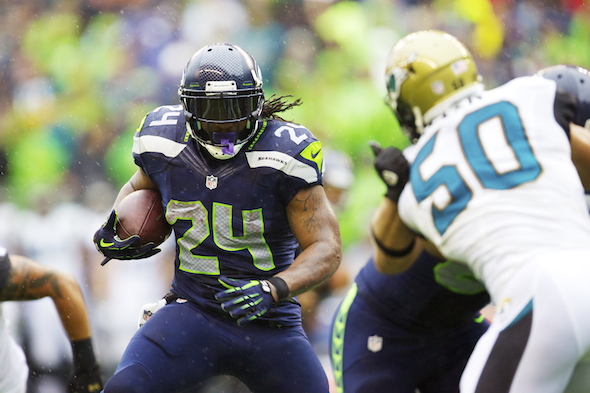 By a wide margin, Marshawn Lynch leads the NFL in making tacklers miss, ahead of Adrian Peterson of Minnesota. The marquee backs will be on display Sunday at CenturyLink Field. / Drew Sellers, Sportspress Northwest

We often hear about pivotal wins, but pivotal losses? Not so much. But the setback the Seahawks suffered at CenturyLink to the Cincinnati Bengals Oct. 30, 2011 has proven to be a franchise changer. After that game, a 34-12 defeat, Pete Carroll re-committed to what had been an ineffective running game.

During the first seven weeks that season, the Seahawks rushed for fewer than 100 yards five times, with a low of 61 against the Bengals. Marshawn Lynch played in six of the seven games, never cracked 100 yards, and had three games in which he ran for 33 (San Francisco), 11 (at Pittsburgh) and 24 yards (Cincinnati). In two starts against the Steelers and Falcons, Lynch touched the ball a combined 14 times.

At that point, Lynch hadn’t surpassed 100 rushing yards in any of his first 18 games as a Seahawk. Averaging 43.8 yards per start, Lynch sought out offensive line coach Tom Cable and asked Cable what he ought to do. Essentially, Cable told Lynch that he should embrace the zone-running scheme Cable had implemented, a system that does not allow a back to hesitate or react, but make one cut and go. Lynch bought into it.

Carroll’s decision to re-emphasize the run began at Dallas Nov 6. While it didn’t pay off in a victory that day – Cowboys 23, Seahawks 13 – Lynch busted out for 135 yards and a touchdown. With Lynch topping 100 yards five times in Seattle’s final eight games, the Seahawks went 5-3 to finish 7-9. Ever since, “Beast Mode” has been in full flower.

Lynch rushed for at least 100 yards 19 times in the 35 games since that loss to Dallas. No NFL back, not even Minnesota’s Adrian Peterson or Houston’s Arian Foster (both 16), has more. No back has as many yards over that span, either, Lynch accumulating 3,402 to Peterson’s 3,058. Lynch also leads the NFL in rushing touchdowns since that Dallas game, 27 to Peterson’s 24.

Carroll’s commitment to Lynch has resulted in two other prime numbers: The Seahawks are 25-9 since Week 9 of 2011, including 9-1 this season, and their 5,325 rushing yards since then leads the NFL (Washington 5,017).

The beauty of The Beast is not in raw numbers but in how he achieves them, by avoiding tackles, making tacklers miss, dragging them for extra yards, and stiff-arming them out of the way. His latest effort occurred at 14:45 of the fourth quarter Sunday, when Lynch had 81 yards after contact and forced seven missed tackles in Seattle’s 33-10 victory over Atlanta.

On the play in question, Lynch showcased his absurd lower body strength on a stretch run off left tackle. Lynch busted through the first arm tackle without slowing, sent William Moore in the sideline with a vicious stiff arm, and then carried a crowd of players for an extra five yards and a first down.

Lynch enjoys a slightly higher percentage because of a greater number of “MTs” – the number of tackles he has either broken or avoided. Since 2010, Lynch has caused or created 219 missed tackles to 187 for Peterson. The disparity is more pronounced this season as Lynch leads the NFL in opponent missed tackles by a wide margin.

In a preseason poll conducted by the NFL Network, players selected Peterson the best player in the league, regardless of position. Lynch ranked 24th, with three backs besides Peterson ahead of him, Foster (8th) Baltimore’s Ray Rice (13th) and Kansas City’s Jamaal Charles (20th). Lynch has outplayed the latter three and enters Sunday’s game in a statistical wash with Peterson.

“They are both great players for sure,” Vikings coach Leslie Frazier said this week. Marshawn is off to another good start (871 yards, 7 TDs), and I think Adrian is off to a good start as well (786 yards, 9 TDs). Their running styles are similar, but dissimilar.

“You know, Marshawn, when I see him breaking all of those tackles and being a downhill runner, he has a lot of success between the tackles. Adrian is one of those guys who can run inside, outside, can score from just about anywhere on the field. They’re both perfect backs. They’re outstanding at what they do.”

“It’s an interesting comparison, to tell you the truth,” said Carroll. “It’s kind of cool to watch because they’re both extremely dynamic. They have so many things that they can do so uniquely, they both have a really definitive style. Marshawn’s way of running and Adrian’s way of running, they’re not at all the same, but they’re extraordinary players and really fun to watch.

“This (Sunday) is a fantastic game to watch and compare the two. Our style of offense is a little bit different than theirs, but both guys are great players and it will be great to watch it on the same field.”

Darrell Bevell served as Minnesota’s offensive coordinator in 2007 when Peterson came to the Vikings from Oklahoma as the No. 7 overall pick in that year’s draft, and watched as Peterson put together his first four 1,000-yard seasons. Bevell moved to Seattle in 2011, a year after Lynch arrived in a grand theft (OL Chris Hairston, LB Tank Carder) from Buffalo.

“Adrian has that top-end breakaway speed,” Bevell said. “He can still make people miss, but he’s not going to do it quite like Marshawn. He runs really hard, and when he comes out the back end, he can be gone. Marshawn is going to make people miss in a phone booth, in a small area. He’s a competitive runner as well, but he’s going to come out of the stacks a lot. They’re both great backs, they both want the ball, and they’re both ultimate competitors.”

“They can both take any play to the house,” said Jared Allen, Minnesota’s five-time Pro Bowl defensive end. “I’m just trying to tell our guys around here, ‘Let’s not let Beast Mode get all into Beast Mode.’ We’ll try to keep him in check, but he’s a very tough-nosed dude. Just like Adrian, you might stop him one, two, three times. But on that fourth time, he might take it 60 yards.”

One year ago at CenturyLink, Peterson had the better statistical game, 182 yards and a pair of scores, to Lynch’s 124 and one TD. Lynch will never score from “anywhere on the field” as Peterson does, but no one makes a three-yard run as thrilling as “The Beast.”