When Mike McCormack entered the Pro Football Hall of Fame in 1984, he did so as the first person associated with the Seahawks franchise so honored. 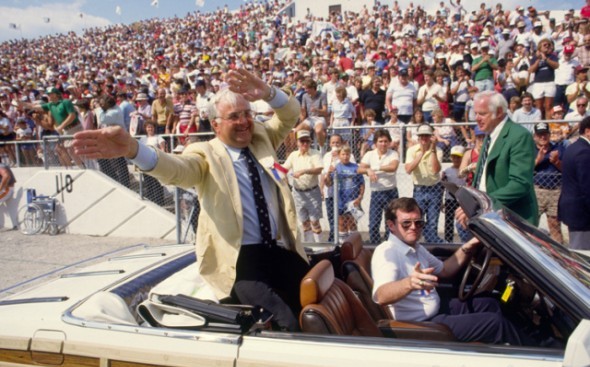 Mike MCormack salutes the crowd during his 1984 induction into the Pro Football Hall of Fame. /  CorkyTrewin.com

Mike McCormack, a member of the Pro Football Hall of Fame who served as interim head coach of the Seattle Seahawks in 1982 and as the club’s president and general manager for seven years after that, died Friday in Palm Desert, CA., at 83. Under McCormack’s stewardship, the Seahawks enjoyed the franchise’s finest years until the mid-2000s, reaching the postseason four times, including the AFC Championship game in 1983.

McCormack joined the Seahawks early in 1982 as Director of Football Operations. In the middle of that season, after the club fired its first head coach, Jack Patera, McCormack, who previously coached the Philadelphia Eagles (1973-75) and Baltimore Colts (1980-81), took over and led the team to a 4-3 record in a strike-shortened season.

Returning to the front office as GM in 1983, McCormack hired Chuck Knox as Seattle’s head coach and was instrumental in the team moving up in the NFL draft in order to take Penn State running back Curt Warner with their first pick.

Knox went on to coach the Seahawks for nine years (1983-91), during which Seattle won 80 games, including a franchise-best 12-4 in 1984. Knox was inducted into Seattle’s Ring of Honor in 2005, 11 years after Warner received the same accolade. Warner rushed for 6,705 yards and 55 touchdowns for the Seahawks.

McCormack stayed with the Seahawks through the 1988 season, departing after a change in the club’s ownership from the Nordstrom family to California real estate developer Ken Behring, who replaced McCormack with Tom Flores.

A year after departing Seattle, McCormack landed with a group that sought to bring an NFL franchise to Charlotte, NC., and was instrumental in helping owner Jerry Richardson receive an expansion club, the Carolina Panthers, in 1993. McCormack served as team president for two seasons (1995-96) and retired after the 1996 club lost the NFC Championship game at Green Bay.

Upon his retirement from Carolina, McCormack became the first inductee in that franchise’s Hall of Honor. He also remains one of two members of the Panthers organization (the other is linebacker Sam Mills) with a statue outside Carolina’s stadium.

While in the Seahawks’ employ in 1984, McCormack was inducted into the Pro Football Hall of Fame in Canton, OH., along with former University of Washington lineman Arnie Weinmeister, Willie Brown and Charley Taylor.

McCormack played with the Cleveland Browns from 1954-62, earning six Pro Bowl selections. In 1994, McCormack was listed as one of the three finest offensive tackles in NFL history when USA Today announced its 75th anniversary all-time team.

McCormack also played on Cleveland’s defensive line and enjoyed his most famous professional moment in the 1954 NFL Championship Game when he stole the ball from Detroit Lions quarterback Bobby Layne to set up one of the early touchdowns in a 56-10 Cleveland rout.

Prior to becoming a head coach, McCormack worked as an assistant for the Washington Redskins under head coaches Vince Lombardi and George Allen.

Cause of McCormack’s death was not immediately announced.