The Huskies need to go through Corvallis to have a chance at eight wins, but they haven’t defeated the Beavers there since 2003 when Keith Gilbertson was the head coach. 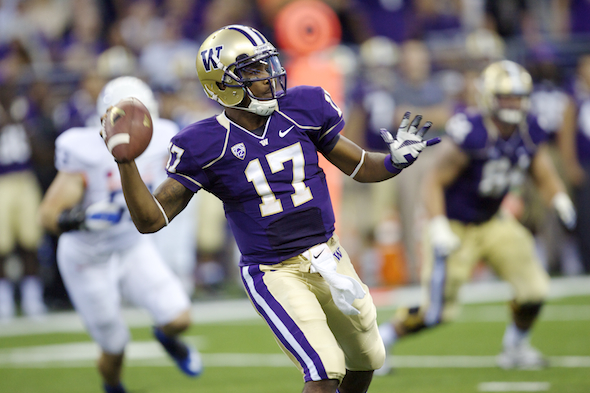 Keith Price, trying to recover from an injury to his throwing shoulder, and the Huskies have yet to win a conference road game this season. / Drew Sellers, Sportspress Northwest

One year ago, a Washington team picked to lose by a touchdown turned tables on Oregon State and won 20-17 in large part because the Huskies solved Beavers quarterback Sean Mannion, one of the Pac-12’s most prolific throwers, by intercepting him four times. Mannion’s chance at redemption comes Saturday night in Corvallis, where the Huskies haven’t won in 10 years.

There isn’t much of a secret about the task Washington faces. Davey O’Brien finalist Mannion is going to throw, principally to Biletnikoff Award candidate Brandin Cooks. Mannion has tossed for 3,860 yards, most in the nation, and 33 touchdowns, also most in the nation, and is completing 67.8 percent of his passes. Fully 100 of his 327 completions have gone to Cooks, who leads the FBS with 1,443 receiving yards and 14 touchdown receptions.

Oregon State leads the conference in passing offense — 393.6 yards per game — and, fortunately for the Huskies, they lead in pass defense, allowing 207.1 yards per game. They also catch Mannion at a time when he has been struggling. Mannion has thrown seven of his 10 interceptions in the last two games.

Both clubs are 6-4, both started fast, and now both are desperate for a win. Oregon State has lost three in a row with Oregon up next in the Civil War. This was the season the Huskies were going to take the next step. But if they can’t beat Oregon State, head coach Steve Sarkisian is going to have a difficult time showing tangible evidence that they have. A loss would be Washington’s fifth in seven games and would complete a winless (0-4) conference road season.

The key question for Washington is whether quarterback Keith Price will play and, if so, how much. Price suffered an injury to his (right) throwing shoulder in the first half against UCLA and sat out the rest of Washington’s 41-31 loss. He didn’t throw a ball again until Thursday, when Sarkisian proclaimed him “vastly improved.”

Sarkisian did not rule out the possibility of using Price as an emergency option, similar to the 2011 Oregon State game when Nick Montana filled in when Price had a leg injury. If that’s the case, Cyler Miles, will start, and he prepared all week to do just that.

Regardless of which quarterback plays, this is a perfect set-up for Washington to deliver a heavy dose of Bishop Sankey, both to take the pressure off Price and/or Miles and keep Mannion off the field as much as possible.

BOWL SEASON: A victory would bolster the bowl resumes of both teams. The Pac-12  has eight teams eligible for bowl games with Washington State on the cusp of making it nine with a win at home over Utah Saturday. The Pac-12 has agreements with seven bowl partners – Rose Bowl,  Alamo, Holiday, Sun, Las Vegas, Fight Hunger and New Mexico. Teams not selected for one of those bowls would be eligible for an at-large invitation.

SERIES: Dates to Dec. 4, 1897, when Oregon State won 16-0 in Corvallis. Oregon State has won seven of the past nine meetings, but Washington has won two of the last three, including 20-17 last year at CenturyLink Field. Bishop Sankey ran for two touchdowns and Travis Coons kicked two field goals for the Huskies, who intercepted Sean Mannion four times.

UW HEAD COACH: Steve Sarkisian (31-29-0) is in his fifth season. After a 5-7 record in 2009, Sarkisian guided the Huskies to a 7-6 record in 2010 that included a 19-7 victory over Nebraska in the Holiday Bowl. That marked Washington’s first postseason game since the 2002 Sun Bowl. Sarkisian coached the Huskies to subsequent 7-6 marks in 2011 and 2012, earning invitations to the Alamo (Baylor) and Las Vegas bowls (Boise State). Prior to joining the Huskies, Sarkisian served as a USC assistant under Pete Carroll (2001-03, 2005-08). He also worked as an Oakland Raiders assistant in 2004. Sarkisian played quarterback at Brigham Young University and later played in the Canadian Football League.