The Seahawks have taken a 3.5-game lead in the NFC West with their victory over Minnesota and San Francisco’s loss at New Orleans Sunday. 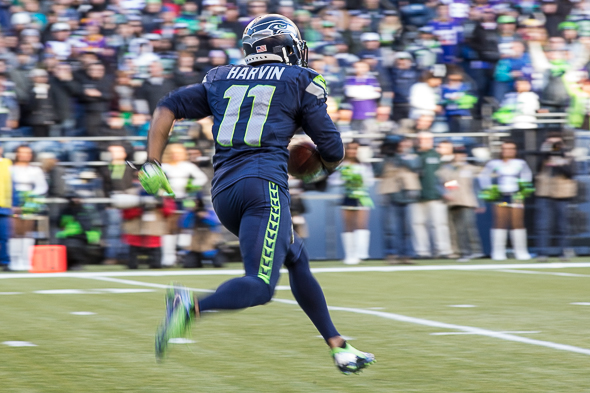 Percy Harvin, making his Seattle debut, had a 17-yard reception and a 58-yard kickoff return in Seattle’s 41-20 victory over the Minnesota Vikings Sunday at CenturyLink Field. / Drew McKenzie, Sportspress Northwest

Marshawn Lynch ran for two touchdowns and caught a pass for a third, Russell Wilson tossed two scoring throws, and Percy Harvin electrified a CenturyLink Field crowd in his Seattle debut as the Seahawks rolled to a 41-20 swamping of the Minnesota Vikings Sunday. Seattle heads into its bye week 10-1, the franchise’s best start and tops in the NFC.

In winning their sixth in a row and a franchise-record 13th consecutive at home, the Seahawks snapped a 10-10 tie in the second quarter with a 28-3 run that gave Seattle its 17th win in 19 games. The home winning streak broke the mark set from 2004-06.

Of more importance, the Seahawks took a 3.5-game lead in the NFC West as a consequence of San Francisco’s 23-20 loss to the New Orleans Saints Sunday. The Seahawks remain the No. 1 playoff seed in the NFC.

The 41 points were the second-most this season — 45 vs. Jacksonville in Week 3 — and were made possible, in part, by Seattle’s three interceptions and one fumble recovery. The defense also held Adrian Peterson to 65 yards on 21 carries, 3.1 yards per rush. Backup Toby Gerhart had more yards than Peterson, 67.

Lynch didn’t rush for a lot of yards (54)  but scored on two short runs in the first half and on a six-yard shuffle pass from Wilson in third quarter. Such was the nature of the rout that Lynch didn’t play in the fourth quarter.

Neither did Wilson, who completed 13 of 18 for 230 yards, two TDs and no interceptions for a season-best passer rating of 151.4. Wilson, who threw a 19-yard TD to Doug Baldwin and flipped a six-yard TD to Lynch, has 21 wins as a starting NFL quarterback, one shy of Ben Roethlisberger’s NFL mark for most wins in the first two seasons of a career. Wilson, who had four completions of 20 yards or more and connected with nine receivers, has eight passer ratings above 100.0 this season.

In his first game in more than a year, Harvin did not get lot of plays (16) but dazzled with two. He made a bobbling, tumbling grab of a Wilson pass for a 17-yard catch that set up the second TD, and returned his first kickoff as a Seahawk 58 yards that set up the third score.

Harvin, who had hip surgery in August, was not scheduled to return kickoffs, but a concussion to Jermaine Kearse forced head coach Pete Carroll into reluctant use of Harvin.

“It was great to finally get out there and start playing with these guys,” said Harvin. “I’ve been anxious to get out there and experience CenturyLink Field. It was spectacular. I just love being here. On the kickoff return, Pete and I wrestled all week about it, but I’m glad I got my chance. From here on, it’s going to a blast.”

“He can do it all — to have him on our football team really elevates our offense,” said Wilson.”You just get this sense that he’s a playmaker. To add him to the mix is really going to make it challenging for teams.”

After Seattle forced its 23rd takeaway during Minnesota’s first drive, the Seahawks cashed with a 50-yard field goal by Steven Hauschka, his 23rd of the season. Seattle missed an opportunity to score a TD when Lynch fumbled, resulting in a 12-yard loss.

A 28-yard pass interference flag on Richard Sherman set up the Vikings at the Seattle 15-yard line, and Minnesota’s Blair Walsh converted a 32-yard field goal to tie the game at 3-3.

Just before the end of the first quarter, Wilson and Baldwin hooked up on 44-yard completion to the Minnesota 30. Wilson then scrambled outside the pocket and hit Ricardo Lockette for a 27-yard completion to the Vikings five-yard line, and Lynch took it in from there, netting his eighth rushing TD of the year.

The Seahawks sacked Christian Ponder three times in the first quarter and recovered a fumble.

The Seahawks used three big plays to take a 17-10 lead: A 23-yard run by Lynch, the 17-yard Wilson completion to Harvin, and a 34-yard Wilson hookup with Zach Miller. Lynch banged in for his second TD.

Walsh kicked a 45-yard field goal to make it 17-13 with 58 seconds left in the half, but Harvin went in for the return. Catching it five yards deep, he burst through a huge seam in the middle of the field to reach Vikings territory.

Following completions of 12 and 19 yards to Robert Turbin and Miller, respectively, Wilson tossed a 19-yard TD to Doug Baldwin, who made a catch between two defenders in the corner of the end zone. The entire sequence took 38 seconds and gave Seattle a 24-13 halftime lead.

Bobby Wagner intercepted Ponder early in the fourth quarter, Seattle’s 24th takeaway of the season, setting up Seattle at the Minnesota 18-yard line. With a first down at the six-yard line, Wilson rolled right, then came back to the middle and flipped the ball, shortstop-style, to Lynch for a 31-13 Seattle lead.

Walter Thurmond intercepted Ponder on Minnesota’s next possession and returned it 29 yards for a score and a 38-13 lead. On Minnesota’s next series, the Seahawks got another interception, following a Bruce Irvin deflection, when Clinton McDonald swiped it, setting up Hauschka’s 26-yard field goal.

NOTES: The Seahawks finally had all of their injured offensive lineman back. Tackles Russell Okung and Breno Giacomini and center Max Unger playing together for the first time since Week 2 . . . WR Jermaine Kearse suffered a concussion in the first quarter on a kickoff return and did not return . . . WR Percy Harvin made his first appearance in the first quarter, lining up as a slot receiver. Harvin also lined up as a fullback.

NEXT: The Seahawks have a bye week. They return to action on Monday Night Football Dec. 2 against the New Orleans Saints at CenturyLink Field.