Since 2002, 18 teams, including the Seahawks, started a season 10-1 or better. The 17 before Seattle all won division titles and six reached the Super Bowl, three winning it. 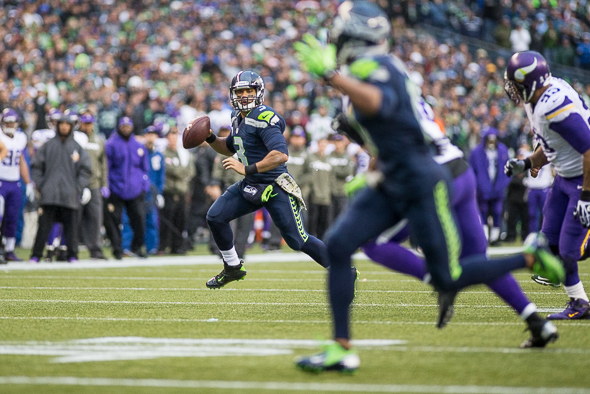 Russell Wilson searches for a receiver during Seattle’s 41-20 victory over Minnesota Sunday. Wilson completed only 13 passes but had a 151.4 passer rating, highest of his career. / Drew McKenzie, Sportspress Northwest

Although Russell Wilson completed a mere 13 passes and Marshawn Lynch fell well shy of 100 rushing yards (54), the Seahawks rolled to another impressive victory Sunday at CenturyLink Field, crushing the Minnesota Vikings 41-20 to extend their record to 10-1, best in franchise history.

Two key stats in the rout: the Seahawks held Adrian Peterson to 65 yards on 21 carries, but more importantly to 27 yards after contact. Peterson’s 1.28 yards after contact per rush marked his third-lowest average this season. In addition, Seattle finished with a +4 in takeaways. The Seahawks have played 45 games in their nearly four decades in which they had a takeaway edge of +4 or greater, and their record in those contests is 45-0.

The advantage in takeaways, abetted by Wilson’s two perfect TD passes, Lynch’s three scores, and Percy Harvin’s theatrics, enabled the Seahawks to become the 18th team since 2002, when the NFL adopted its current division alignment, to start a season 10-1 or better.

Here’s what we know about the previous 17: All qualified for the playoffs – easily — and all finished first in their divisions. Six – 35.3 percent — reached the Super Bowl, three winning it. Four others reached a conference championship game, falling just shy of Super Sunday, while seven other teams lost in the divisional playoffs.

Fate Of Teams That Started A Season 10-1 Or Better

WILSON!: In quarterbacking his 21st victory (one shy of Ben Roethlisberger’s NFL record for most in the first two seasons of a career), and 13th in a row at CenturyLink Field, Wilson produced a quarterback rating of 151.4, highest of his NFL career. Wilson’s previous high: 136.3 vs. the St. Louis Rams in Week 17 last season.

Wilson’s 151.4 rating is also the second-highest delivered by a Seattle quarterback, a few points shy of Dave Krieg’s 153.3 against San Diego Dec. 14, 1986, in which Krieg threw four touchdown passes without an interception.

Matt Hasselbeck, who quarterbacked the Seahawks to the Super Bowl following the 2005 season, had a single-game best passer rating of 147.7 Dec. 18, 2005 at Tennessee.

Wilson also had a Total Quarterback Rating of 98.5 (see detailed explanation here) against the Vikings, his highest QBR in a game this season. Wilson now has eight games in his career with a Total QBR rating of 90.0 or above, and only Peyton Manning, with 12, has more (Pro Bowl-level performance for a season usually means a QBR of at least 65-70).

Wilson’s two TD throws against Minnesota were eye-catching, the first a 19-yarder to Doug Baldwin placed so perfectly in the corner of the end zone that only Baldwin could snag it between two defenders, the second an improvisational shovel pass to Lynch. Equally impressive as his touchdowns: Wilson distributed his 13 passes to eight receivers, including four to TE Zach Miller.

In only four of Wilson’s 21 wins as a starting quarterback has he completed fewer than the 13 passes he did Sunday, and in two of those he didn’t complete 10 passes. In Seattle’s 58-0 blowout of Arizona last year, he completed seven, and in a 29-3 victory over San Francisco this season Wilson completed eight.

BEAST MODE: Marshawn Lynch gained 54 yards (and scored three touchdowns) on 17 carries against Minnesota. That marked only the sixth time in Lynch’s career with the Seahawks, covering 54 games, that he has accumulated fewer than 60 rushing yards in a Seattle victory.

HAUSCHKA’S KICKING CLINIC: Steven Hauschka hit both field goal attempts Sunday, including one from 50 yards, and made 24 of 25 attempts this season. Hauschka’s only miss came in Seattle’s 34-28 loss to the Indianapolis Colts Oct. 6, and that wasn’t his fault. You may recall the play.

Hauschka went four-for-four on the field goals that cleared the line of scrimmage. But an attempt early in the second quarter was blocked as the Seahawks’ interior line protection failed and lineman Lawrence Guy made a deflection. Delano Howell caught the ball on the fly and returned it 61 yards for a touchdown.

(More notable than the blocked field goal for a TD in that game was another anomaly: Wilson became the fifth quarterback in NFL history to pass for more than 200 yards and rush for more than 100 in a loss.)

Despite the block, his 96 percent accuracy rate is ahead of his career best from last year at  88.9. Hauschka already made as many field this season as he made in 2012, and is one shy of matching his career high for the 2011 Seahawks.

Hauschka has never made the Pro Bowl, but seems a cinch this season.

HOME WIN STREAK AT 13: Seattle has forced 34 turnovers and won by an average of 18.6 points per game during the streak. This is the first season in franchise history in which the Seahawks won a home game with a +4 or better turnover margin (Minnesota) and won another with a -3 turnover margin (Tampa Bay, Nov. 3).