I-91 supporters Sonics Without Subsidies claims deal between Chris Hansen and the city contains “gross shortfalls” in estimating the real public cost of the proposed arena. 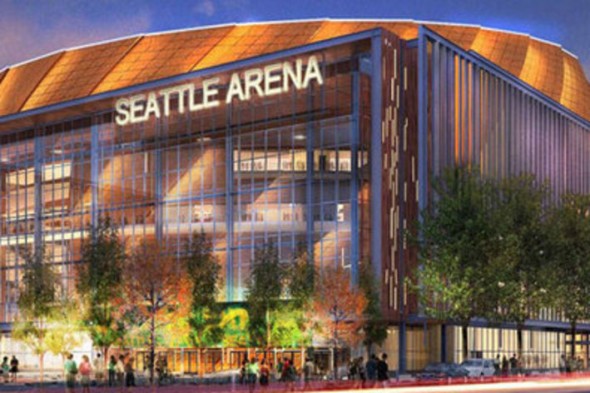 Another consequence for Chris Hansen’s failure to acquire the Sacramento Kings to play in Seattle this fall: It provided time for opponents of his proposed $500 million basketball/hockey arena in SoDo to armor up. Foes Tuesday released a consultant’s report that says the cost to city and county taxpayers in the proposal is more than $731 million over 32 years, not the advertised $200 million.“This is a duckling, and a very ugly one,” said Seattle attorney Cleveland Stockmeyer of the report that skewers the memorandum of understanding (MOU) between Hansen, the arena developer, the city and King County.

Calling the deal “financially reckless conduct” by the city, Stockmeyer, who represents city taxpayers and supporters of Initiative 91 that became city law in 2007 preventing public subsidies for facilities that primarily benefit pro sports teams, said his group will present the findings “of illegal subsidies” in individual meetings with City Council members and mayor-elect Ed Murray.

If the city fails to amend the MOU to eliminate public subsidies from the deal, he promised to sue Hansen, the city and county.

“This deal represents a tax shirking by billionaires to make a profit,” said Stockmeyer at a press conference in law offices in the Columbia Center tower. “It’s the one percent (of America’s wealthiest) asking for zero percent taxes.”

A new organization Stockmeyer called Sonics Without Subsidies claims to be supportive of the return of pro basketball, but not under the terms and conditions of the MOU. Stockmeyer was the lead attorney in the group’s attempt to stop the city’s draft environmental impact statement authorized by the MOU, a claim rejected in September in King County Superior Court as being premature because no actions had been taken regarding the arena. No ruling was made on the validity of the claims.

The group contends that the deal does not meet the fair-value standards in I-91 for required payments to the city from the private operator, Hansen’s ArenaCo company. Rather than being portrayed as a “free arena” after $200 million borrowed by the city is paid back via arena revenues, the report, prepared by Dr. Adrien Gamache of Private Valuations, Inc. of Bellevue, cites “gross shortfalls” in the MOU’s accounting of actual public expense over the life of the deal.

Also cited is a lack of protection, via performance bonds, for up to $600 million in public funding.

Gamache’s report focuses on three parts of the debt service on the project:

The combined fair-value shortfalls total $824 million, from which Gamache subtracted $92.4 million as the estimated value of land and improvements at the end of 32 years, leaving a total of about $731 million. Copies of his 23-page report, plus numerous exhibits outlining his calculations, were provided to the media at the press conference. Gamache’s company was paid $15,000 for the study.

City Council members and staffers, from the time the original deal was created between Hansen and outgoing Mayor Mike McGinn, through changes negotiated with Hansen by the council, have insisted the MOU was I-91 compliant.

The initiative that became law has often been criticized for its ambiguity. But its enactment was decisive in the departure of the Sonics in July 2008 for Oklahoma City. While the little-understood ballot measure drew no organized opposition, the 74 percent majority was seen by NBA Commissioner David Stern and some owners as unique in any U.S. city and a repudiation of their efforts to build an arena through a public-private partnership.

The law remains on the books, but is also subject to repeal by the council via majority vote. However, repeal would require a majority of council members to reject the will of a 3-to-1 majority of 2007 voters.

Stackmeyer’s goal is to persuade council members in individual meetings that Gamache’s research is a true reflection of the public cost. The city is likely to contend that the vague definition of what constitutes fair value in the law’s vague language does not invalidate the the MOU and its cost calculations.

A failure to reach agreement, and a subsequent approval by the council of the draft EIS to commence the SoDo arena under the current MOU, apparently would trigger a lawsuit by Sonics Without Subsidies. Stackmeyer said some of the information earlier was sent for inclusion in public comments for the draft EIS as well as to council members.

“We never got a response,” he said.

Hansen paid about $55 million for the seven acres of property immediately south of Safeco Field to house the 18,000-seat arena. But the fast-track project was thwarted in May by a 22-8 vote of NBA owners to keep the Kings in Sacramento in a proposed new arena, rather than relocate to Seattle. Hansen’s plan, which turned into five months of intense controversy in both cities and a national curiosity, included a tenancy of two to three years at KeyArena, the Sonics home, while the arena was built.

Hansen vowed to continue the project, although without the pending arrival of a team, it has lost urgency. If the latest challenge amounts to a serious threat to the project, there was speculation by some supporters at the press conference that Hansen may be forced to consider either of two sites at the Seattle Center — a Key teardown or upon land occupied by Memorial Stadium — that were considered by the draft EIS as alternates to SoDo.

And then the name of Steve Ballmer, Hansen’s partner in the arena bid who is leaving Microsoft as CEO, came up.

Said one: “All he has to do is abandon borrowing public money and I-91 goes away.”