The 2005 Seahawks are the franchise’s most successful team, having reached Super Bowl XL. But are the 2013 Seahawks better? If they played, who’d win? Vote here. 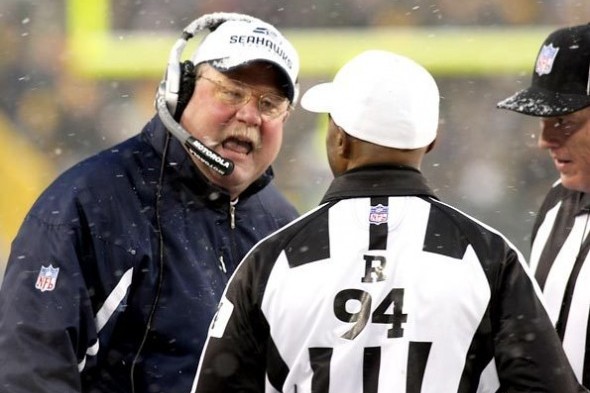 Former Seahawks coach Mike Holmgren jaws at an official during Seattle’s run to the Super Bowl in 2005. That year’s team went 13-3 with an 11-game winning streak and became the franchise’s first entry in the Super Bowl. / Sportspress Northwest file

Our inbox contains a question, submitted by someone with too much bye-week time on his hands, that cannot be answered because it is hypothetical, reducing any response to speculation. The question: “Who would win if the 2013 Seahawks played the 2005 Seahawks?” The only thing that can be said with confidence is that Pete Carroll and Mike Holmgren would have a difference of opinion.

Had it not been for dubious officiating — the lead official  years later apologized for his poor calls — the 2005 Seahawks might have won Super Bowl XL instead of falling to the Pittsburgh Steelers 21-10. Seattle hasn’t been much of a threat to return to the Super Bowl until the past two seasons.

In the hypothetical 2005 vs. 2013 matchup, cases can be made for both editions of the Seahawks. In fact, it’s remarkable how statistically similar are the teams. 2005 constructed a franchise-record 11-game winning streak en route to a 13-3 regular-season finish. 2013 would be riding an 11-game streak if it hadn’t had a field goal blocked and returned for a touchdown Oct. 6 at Indianapolis.

2013 can still fashion an 11-game winning streak if they win out, no easy feat with the NFC’s No. 2 seed, New Orleans, due at CenturyLink a week from Monday and road games in San Francisco and New York among the final five.

As a refresher, this was the starting lineup that Holmgren trotted out on Super Bowl Sunday, Feb. 6, 2006 at Ford Field in Detroit:

Only three of Seattle’s Super Bowl starters are on an NFL roster today (none with the Seahawks): OL Sean Locklear (Atlanta), QB Matt Hasselbeck (Indianapolis) and K Josh Brown (NY Giants). Brown is the only starter.

What mainly distinguished the 2005 team was its scoring offense. At 28.2 points per game, the Seahawks led the NFL with Alexander, running behind Jones and Hutchinson, setting a league record with 28 touchdowns. Seattle’s scoring defense was almost as good, ranking seventh. The 2005 team allowed only five rushing TDs all season.

With Jones and Hutchinson, 2005 had a superior offensive line, although it can’t be proven with stats, as the chart shows. 2013 has a superior secondary and stats support that. 2013 ranks second against the pass, fourth in TDs allowed (4) and first in interceptions (16). 2005 ranked 25th, 9th and 14th in those categories.

In attempting to determine who would win between 2005 and 2013, which team had — or has — the better playmakers?. Which quarterback is more likely to deliver? Would you take Alexander, who rushed for more yards and touchdowns, or Lynch? Michael Boulware or Earl Thomas? And if it came down to a kick, Josh Brown or Steven Hauschka?

After picking a winner, we’d appreciate a comment telling us why you voted the way you did.