In addition to playing more than 100 matches over five seasons with the Sounders, Evans has been capped 16 times by the U.S. National Team, including 10 this year. 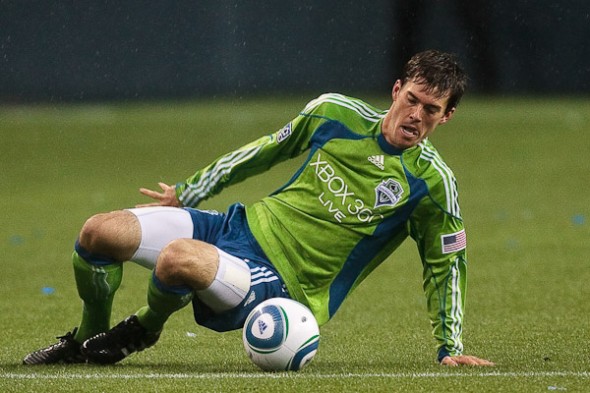 The Sounders Wednesday re-signed Brad Evans, who has been with the club since its inaugural season of 2009. / Sportspress Northwest file

The Sounders FC Wednesday re-signed midfielder Brad Evans to a multi-year contract. Terms were undisclosed. The 28-year-old Evans has been a starter for Seattle since 2009, and ranks third in club history in games played (112), started (103), goals (17) and assists (19) and fourth in minutes.

Evans is one of four players to make more than 100 appearances for the Sounders, and has also been capped 16 times by the U.S. Men’s National Team.

“Re-signing Brad was a major priority for us,” said Sounders owner and general manager Adrian Hanauer. “He has become a leader in the locker room and is a versatile player on the field. Brad exhibits the commitment, values and spirit of playing for the Sounders FC badge.”

Evans had career-high five assists in 2013, second on the club, and four goals. His 13 points were the second most in his seven-year career. He also matched his career high with 37 shots. Evans scored the first-half game-winner in the knockout round to help Seattle advance to the Western Conference semifinals.

“My goal was to stay in Seattle and I’m very excited to continue my career here,” said Evans. “It’s always an honor to play for this city and these fans. I can’t wait to get back to work with my teammates.”

In addition to playing for the Sounders, Evans has also become a mainstay on the U.S. National Team, making a career-high 10 appearances in 2013. He scored the latest game-winner in USMNT qualifying history when he struck in second-half stoppage time at Jamaica June 7.

The Sounders acquired Evans in the 2008 MLS expansion draft from the Columbus Crew, a club he played with for two seasons. In 2008, Evans scored five goals and helped the Crew win the Supporters’ Shield and MLS Cup.