Unless QB Keith Price makes serious strides in rehab, University of Washington fans will see a glimpse of the future when the Huskies play Oregon State Saturday. 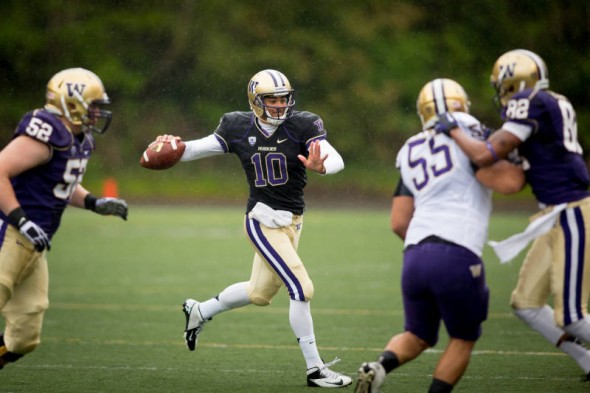 By Washington quarterback Keith Price’s estimate, he will have spent six to eight hours rehabbing his sore right shoulder Wednesday. Also on the agenda is watching what he calls a “crazy” amount of Oregon State film.

Price hasn’t taken a live snap or thrown this week in practice, but he’s preparing as if he will start the next-to-last regular season game of his college career Saturday when the Huskies (6-4, 3-4 Pac-12) face the Beavers (6-4, 4-3 Pac-12) at Reser Stadium.

“Actually, when I’m just walking around, it doesn’t feel like anything happened. When I try to pick my arm up and try a throwing motion is when I really feel the pain,” Price said. “I haven’t even tried to extend my arm.”

An MRI scan taken during the weekend didn’t reveal structural damage. Washington coach Steve Sarkisian confirmed Wednesday that his final decision about Price’s availability will come after he watches the redshirt senior throw during practice Thursday.

Last week, back-up Cyler Miles relieved Price in the second half and completed 15 of 22 passes for 149 yards, two touchdowns and two fourth-quarter interceptions. It was an up-and-down performance in the first significant action of his college career. It provided Sarkisian a few teachable moments.

Miles, a redshirt freshman, was relatively poised, connecting on TD throws of one and 14 yards, though he missed a few checkdowns and wasted two opportunities to tuck it and run.

A seemingly laid-back, understated sort, Miles said he isn’t fretting about the possibility of his first college start coming in a hostile road environment.

“It’s up to coach Sark and Keith, but I’m just going to go play, be confident in my abilities and my teammates,” Miles said.

Rivals.com ranked Miles the No. 2 dual-threat quarterback in the country coming out of Mullen High School (Centennial, CO.). The Denver Post called him the No. 1 recruit in the state. Monday Sarkisian called the six-foot-four, 213-pounder more elusive than former UW star Jake Locker.

Quarterbacks coach Marques Tuiasosopo said Wednesday he saw plenty to like from his pupil in the 41-31 loss to UCLA.

“I thought Cyler did a couple things really well, and one of them was being able to stand in the pocket, and not have happy feet or get spooked, or get out of there too soon,” Tuiasosopo said. “He stood in there and made some really good throws. I think that’s something he can build on.”

Miles completed 21 of 31 passes for 250 yards, three touchdowns and two interceptions in 2013, though the sample size is minimal. His five appearances were mostly during garbage time, though he did flash his touted speed early in the season with a 64-yard run against Idaho State.

According to the diagnosis by White Sands rehab Orlando, Price injured his thumb in a loss to Stanford in early October, then aggravated it two weeks later against Arizona State, which gave Miles the chance to practice with UW’s first-team offense leading up the Cal game Oct. 26. Price healed in time to start against the Bears and throw for 376 yards and two touchdowns in a 41-17 beat-down.

“It’s not new to him,” Sarkisian said of Miles working with the first team. “I think he’s really focused. He’s understanding the game plan. Having a little taste of actually playing real football there the second half against UCLA, he’s building off the positives. He’s learning from some of the negatives, of where he can improve mentally to really get ready for a ballgame.”

That won’t matter Saturday if Price makes a speedy recovery.