The Washington-Washington State rivalry, largely dominated by the Huskies (67-32-6), has been a steppingstone for a variety of Hall of Fame players and coaches on both sides. 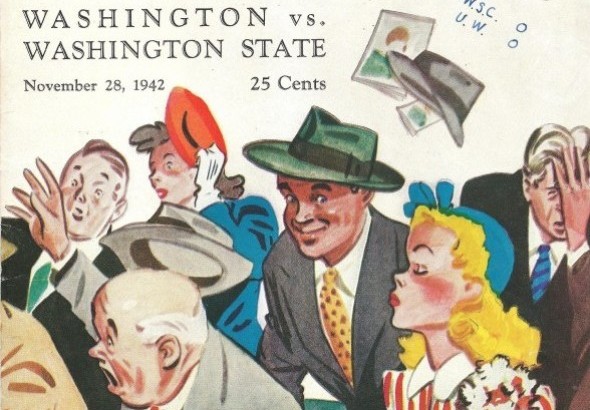 Program cover from the 1942 Washington-Washington State game at Husky Stadium, a 0-0 tie. The schools also played to scoreless ties in 1932 and 1934. / David Eskenazi Collection

The Washington-Washington State rivalry presents a marvelous opportunity to play, “Who Knew?” It’s unlikely, for example, that the 59,887 fans who froze throughout the 1985 Apple Cup at Husky Stadium (26 degrees at kickoff) had any inkling that they might be watching a future Super Bowl MVP, a College Football Hall of Famer, and 28 players who would be selected in two subsequent NFL drafts. 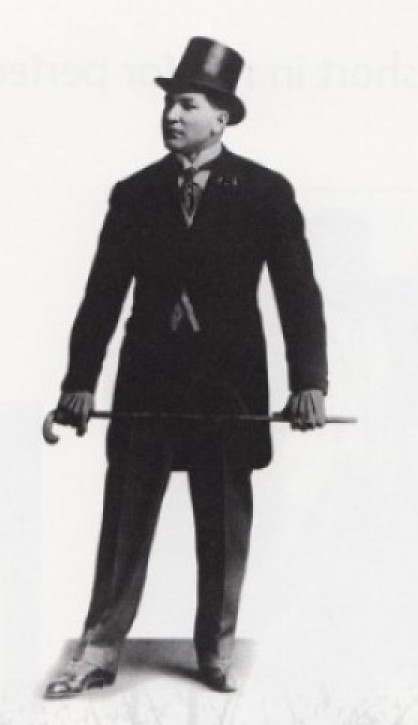 The dapper Lone Star Dietz coached at Washington State from 1915 through 1917. In 1915, he coached the school’s first Rose Bowl team. / David Eskenazi Collection

Should you care to review the UW-WSU rivalry, you’ll find that it is rich with such arcana. Future NFL head coaches have played in the Apple Cup, and so have future Pro Football Hall of Famers and NFL Players of the Year. The game has also featured future Congressmen and mayors.  A look back on some of the game’s more intriguing graffiti:

Pro Champion: Washington’s George Wilson (1923-25) became the first graduate of the Washington-Washington State series to play on a professional football champion, and the rivalry’s first future All-Pro. UW’s first consensus All-American, selected by The Associated Press, Grantland Rice and Collier’s, and a star in two Rose Bowl games (1924, 1926), Wilson barnstormed through a series of exhibition games with Red Grange after his senior year and then signed with the American Football League’s Los Angeles Buccaneers.

When the ill-fated Buccaneers folded after a few months, Wilson joined the NFL’s Providence Steam Roller, an early franchise that played its games in a 10,000-seat velodrome in Providence, RI.

Wilson spent three seasons with the Steam Roller and had his best year in 1928 when the Steam Roller won the NFL title with an 8-2-1 record (no championship game then). Wilson scored five touchdowns that year, a big total, and was named first-team All-Pro by both the Green Bay Press Gazette and Chicago Tribune, two of the major All-Pro selectors of the era.

Wilson performed in the NFL at a time when the best players earned a couple of hundred dollars per game with little hope of making more. At the urging of Providence teammate Gus Sonneberg, who met Wilson in Seattle when Sonneberg’s Dartmouth Hanover Horde helped the University of Washington christen Husky Stadium (Nov. 27, 1920), Wilson was persuaded to join Sonneberg in a new venture, a professional wrestling tour through Australia.

They both cleared $10,000 on the trip, but authorities would not allow them to bring the money into to the United States. Broke and too old to return to pro football, Wilson spent most of his life as a day laborer and dock worker. An Everett native, he entered the College Football Hall of Fame in 1951 and died in San Francisco in 1963. 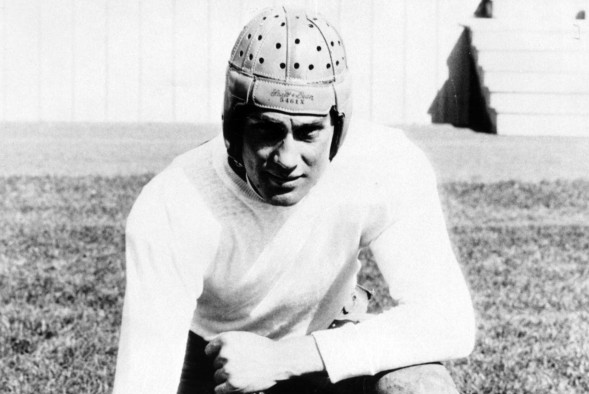 The great Mel Hein played for Washington State in the 1929-30 Apple Cups before launching a Pro Football Hall of Fame career with the New York Giants. He was the NFL’s MVP in 1938. / David Eskenazi Collection

Eye on 1929: The 23rd renewal of the UW-WSU rivalry featured an intriguing cast: Two future NFL Hall of Famers, two future professional head coaches, three future members of the College Football Hall of Fame, a future NFL Most Valuable Player, and the future world record holder in the discus.

Teammates on Washington State’s 1930 Rose Bowl team, Mel Hein and Turk Edwards of WSU more than held up the Cougars’ part of that intriguing cluster.

Hein played both ways throughout his pro career, most of it with the New York Giants, and in 1938 became the first (and still the only) center named NFL Most Valuable Player. When he retired, Hein coached the 1947 Los Angeles Dons and served as a line coach for several teams, including the New York Yankees and Los Angeles Rams. After spending 15 seasons as a USC assistant line coach, Hein went into private business. He entered the College Football Hall of Fame in 1954 and was part of the Pro Football Hall of Fame’s inaugural class in 1963. 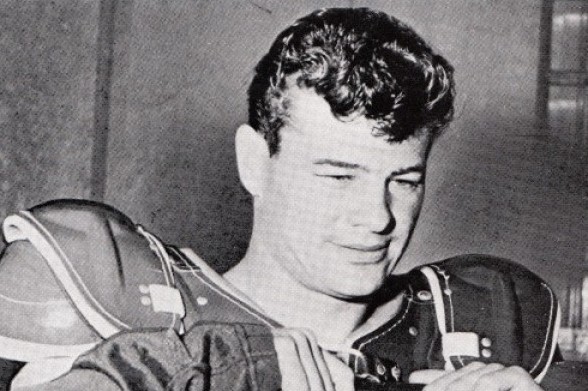 Husky great Hugh McElhenny set the single-game rushing record of 296 yards and five touchdowns in 1951. He later became a member of both the College Football and Pro Football halls of fame. / David Eskenazi Collection

Washington’s Paul Schwegler, a two-time All-America tackle from 1929-31, entered the College Football Hall of Fame in 1967; Paul Jessup, a tackle for Washington from 1927-29, set a world record in the discus (169-9)  Aug. 23, 1930 at the AAU Track and Field Championships in Pittsburgh, shortly after his UW graduation. 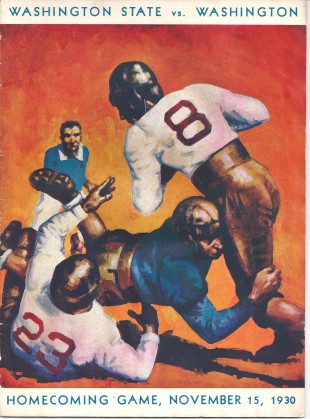 In hindsight, the Dodgers would have been better served taking Texas Christian’s Sammy Baugh, the sixth overall pick in 1937 who went to the Washington Redskins. Baugh became the Peyton Manning of his day, earning six Pro Bowl nominations, and was enshrined in the Hall of Fame in 1963.

A center who came to the Huskies from Chicago, Mucha was the fourth overall pick in 1941 by the Cleveland Rams and had a 22-game career that ended in 1946. Washington teammate McAdams went to the Brooklyn Dodgers with the eighth overall pick and played 30 games over three seasons. Mucha and McAdams were the first two ex-Huskies selected among the top 10 picks in the draft.

Strangest injury: Glen “Turk” Edwards and Mel Hein, Washington State teammates in 1929-30, both went on to play pro football, Edwards with the Boston Braves and Washington Redskins, Hein with the New York Giants. On Nov. 24, 1940, Edwards and Hein, the respective captains of the Redskins and Giants, met at the center of the field for the pre-game coin toss. When Edwards turned to go back to the Washington bench, his knee collapsed. He never played again. 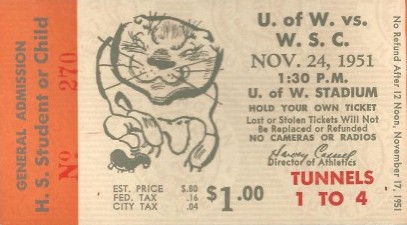 Ticket to the 1951 Washington-Washington State game at Husky Stadium. This game marked Hugh McElhenny’s last appearance for the Huskies, who lost to the Cougars 27-25. / David Eskenazi Collection

McElhenny, named Washington’s greatest player in the second half of the 20th century on the occasion of the school’s Centennial in 1989, joined the San Francisco 49ers as the draft’s ninth overall pick in 1952. He scored 60 touchdowns in his career, was part of the 1950s All-Decade team and won the Pro Bowl MVP award in 1958.

A WSU lineman, Rademacher never played football professionally, choosing a career in boxing. Between 1952-55, Rademacher won numerous amateur titles, including the Seattle Gold Gloves four times, the U.S. Amateur Championships, the Chicago Gold Gloves and All-Army Championship. The latter triumph landed him on the 1956 U.S. Olympic team, and the gold medal he won in the heavyweight division greased his chance to fight for the world title in his first pro bout. 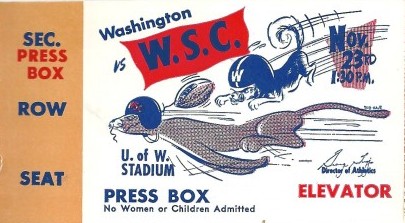 Ticket to the 1957 Washington-Washington State game, the first for Jim Owens as head coach of the Huskies. The Cougars pinned a 27-7 defeat on the Huskies. / David Eskenazi Collection

Apple Cup cluster: The 1985 Apple Cup, played in a frigid Husky Stadium, featured a future Super Bowl Most Valuable Player, three future No. 1 NFL draft choices, a future NFL scoring leader, the winner of two future Super Bowl rings, a College Football Hall of Famer, the only player named MVP of the Rose and Orange bowls, and the father of a three-time NBA Slam Dunk champion.

Quarterback Mark Rypien of Washington State, who led the Cougars to a 21-20 victory in that 1985 game, directed the Washington Redskins to victory in Super Bowl XXVI, becoming the first native of Canada (Calgary, Alberta) selected MVP on football’s biggest stage.

Washington’s Kevin Gogan won two Super Bowl rings as a member of the Dallas Cowboys (1992-93), Washington State’s Rueben Mayes entered the College Football Hall of Fame in 2009, and Washington RB Jacque Robinson, the Rose-Orange MVP, not only starred in three Apple Cups for the Huskies (1982-84), so did son Nate as a defensive back in 2002, after which Nate Robinson won the NBA dunk contest three times. 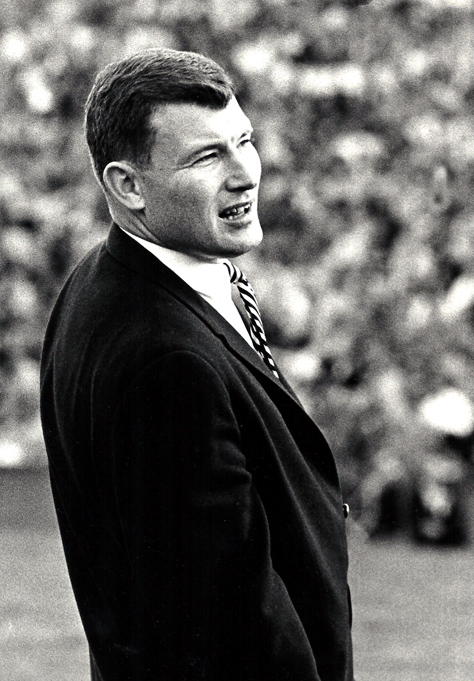 Jim Owens coached the Huskies from 1957 through 1974 and a veteran of 18 Apple Cups. When Owens started at UW, the winner of the rivalry game received the Governor’s Cup. The Apple Cup was first awarded in 1962. / David Eskenazi Collection

The 1985 Apple Cup included 28 players between the schools who were selected in NFL drafts.

Accolades: In 1999, the editors of Total Football, in cooperation with the Pro Football Hall of Fame, selected the “300 Greatest Players in Pro Football History.” Among the 300 were six Apple Cup graduates – three Huskies and three Cougars.

Pro Bowl MVPs: Mark Brunell (1997) and Warren Moon (1998) of Washington, who played in a combined five Apple Cups, were named Most Valuable Players in the AFC-NFC Pro Bowl in back-to-back years.

Brunell, who set five Rose Bowl passing records in 1991, was selected Pro Bowl MVP in 1997 as a member of the Jacksonville Jaguars. Moon, as a member of the Seahawks, won it the following year after scoring the game-winning touchdown.

In addition to Moon’s game-winning TD, Brunell threw a 17-yard TD pass to Andre Rison and Bledsoe tossed a 14-yard TD pass to Jimmy Smith. Chandler had the misfortune of fumbling the ball over to the AFC late the game, setting up Moon’s one-yard TD run. 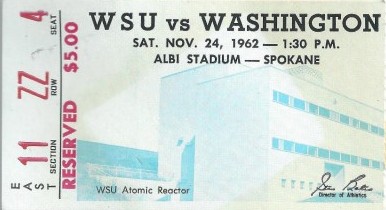 Ticket to the 1962 Apple Cup, played at Washington State and won by Washington. For many years, the rivalry game was played at Joe Albi Stadium in Spokane. / David Eskenazi Collection 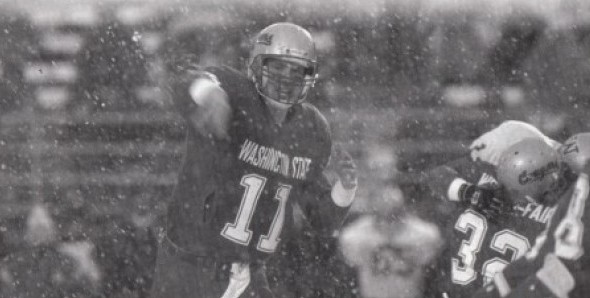 Washington State’s Drew Bledsoe delivered one of the signature performances in Apple Cup history in 1992 when he led the Cougars to a 42-23 win in a Pullman blizzard. / David Eskenazi Collection 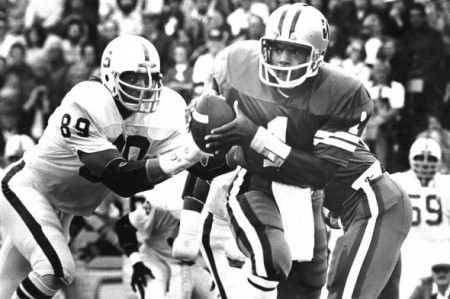 Warren Moon led Washington to a dramatic win over Washington State in 1975 with a touchdown heave to Spider Gaines in the final two minutes at Husky Stadium. / David Eskenazi Collection. 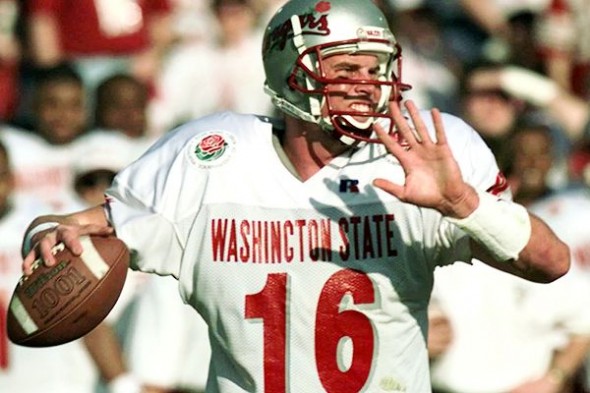 Quarterback Ryan Leaf led the Cougars to a 41-35 victory over Washington at Husky Stadium in 1997, one of WSU’s biggest wins in the rivalry. / David Eskenazi Collection

First to play for UW & WSU: Frank Field became the first player in the history of the rivalry to play for both Washington and Washington State. Field lettered at WSU in 1897 and at Washington in 1899 and 1900.

“Couskies”: Nine played for both Washington and Washington State in the Apple Cup. All, except the aforementioned Frank Field at the turn of the 20th century, switched schools during the World War II years when the Navy and Marines transferred students so they could participate in the equivalent of officer candidate training.

Many of the historic images published on Sportspress Northwest are provided by resident Northwest sports history aficionado David Eskenazi. Check out David’s Wayback Machine Archive. David can be reached at (206) 441-1900, or at  seattlesportshistory@gmail.com