Game Of The Year: Seahawks Vs. Saints

The Seahawks (10-1) take on the New Orleans Saints (9-2) Monday night at CenturyLink in a game that will go a long way to deciding home-field advantage in the playoffs. 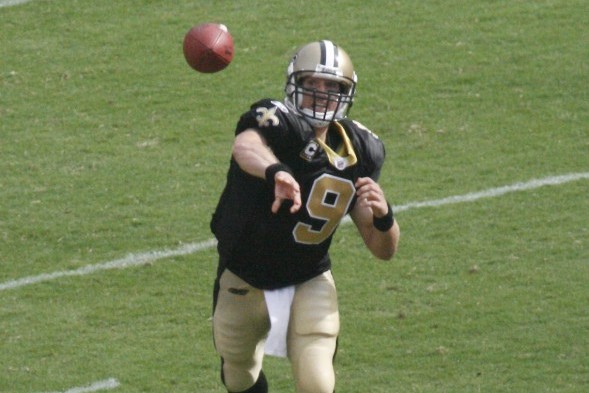 Rewind the calendar to Jan. 8, 2011, the day the 11-5 New Orleans Saints lined up for their NFC wild card game against Seattle already insulted that, as defending Super Bowl champions, they had to hit the road to face a 7-9 Seahawks team that had become the first club in NFL history to wins its division with a losing record.

The Saints immediately asserted themselves, constructing leads of 10-0 and 17-7 behind quarterback Drew Brees, only to have matters go south. With Matt Hasselbeck orchestrating matters, the Seahawks outscored the Saints 24-3 during the second and third quarters and turned back a late New Orleans rally when Marshawn Lynch delivered his “Beast Quake” touchdown run of 67 yards to seal a 41-36 victory.

In case the memory is fuzzy, Lymch took a second-down carry with less than four minutes remaining, and the highlights began. He broke six tackles on his long run as eight Saints got hands on Lynch, who also tossed in a massive stiff-arm that sent cornerback Tracy Porter sprawling to the turf to complete the longest scoring run of Lynch’s career.

“I mean, it was ridiculous,” Brees said this week when asked to revisit the play. “It was one of the best runs that I’ve ever seen. Unfortunately, I had to be on the other sideline for that.”

As he was then, Brees is the principal obstacle the 10-1 Seahawks must overcome Monday Night when they, as the current No. 1 seed in the NFC, tangle with the 9-2 Saints, the No. 2 seed, in one of the most anticipated NFL games in CenturyLink history.

It would be difficult to find two teams more evenly matched statistically. The Seahawks average 27.8 points, the Saints 27.7. Seattle yields 16.3, New Orleans 17.8. The Seahawks are a six-point pick largely because they are playing at CenturyLink, where they are amid of a franchise-record 13-game winning streak.

The showdown will give one team the edge for home-field advantage throughout the playoffs.

It figures to be a strength-on-strength matchup of the Saints passing attack vs. the Seahawks secondary. Seattle ranks No. 2 in the league in pass defense, New Orleans No. 2 in passing offense.

The matchup, which pits Brees, receivers Marques Colston and Lance Moore, TE Jimmy Graham and the versatile Darren Sproles against Richard Sherman, Earl Thomas and Kam Chancellor, took a hit this past week with news that CB Brandon Browner, already injured, was in violation of the NFL’s substance-abuse policy, and is appealing a one-year suspension. His backup, Walter Thurmond, will sit out the next four games for violating the NFL’s substance-abuse policy.

That means reserves Byron Maxwell and Jeremy Lane will sit in Brees’ crosshairs. The Seahawks might be forced to move Sherman around instead of keeping him on his usual side of the field in order to deter the resourceful Brees from dictating matchups.

“He knows all of the tricks in terms of where to throw, how to look off a guy, and controlling people with his eyes,” said Seattle defensive coordinator Dan Quinn. “It’s going to take our best program against them, but also affecting him as well with a four-man rush. It’s not just one guy that’s going to do it, it’s the way we all handle it.”

Brees has 28 touchdowns against eight interceptions and, as a measure of the kind of year he’s having, has a slightly higher passer rating, 107.3, than Russell Wilson, 105.1.

“They can strike you dead on offense,” said Seahawks coach Pete Carroll. “They have also been playing very, very good defense, particularly against the throwing game, causing problems, and their special teams are stout and tough and physical.”

One of Seattle’s toughest challenges will be derailing the success Brees has had with Graham, who has 65 catches for 946 yards and 11 touchdowns. Think a vintage Tony Gonzalez with speed.

“He’s a tremendous talent,” said Carroll. “He’s a ball-control catcher and he’s a down-the-field threat. They use him in numerous ways. They move him all around, inside and outside. He plays as a wide receiver and Brees knows he can throw the ball at him, with coverage all over him, and he can still make plays. So we have to cover him in multiple ways. It will take everything we have to slow down a guy like this.”

The Seahawks will also have to figure out a way to slow down the New Orleans pass rush. The Saints have 37 sacks, tied for the league lead (Seattle has 33), Cameron Jordan leading the way with 9.5.

The Seahawks view each game as a “championship opportunity” unto itself. But safety Earl Thomas admitted this week that facing the Saints represents a special opportunity.

SEAHAWKS HEAD COACH: Pete Carroll (68-55 career, 35-24 Seattle) is in his fourth season. In 2010, he directed Seattle to the NFC West title, the Seahawks becoming the first team in NFL history to win a division with a losing (7-9) record. Prior to joining the Seahawks, Carroll served as head coach at Southern California, where his Trojans won seven Pac-10 titles.