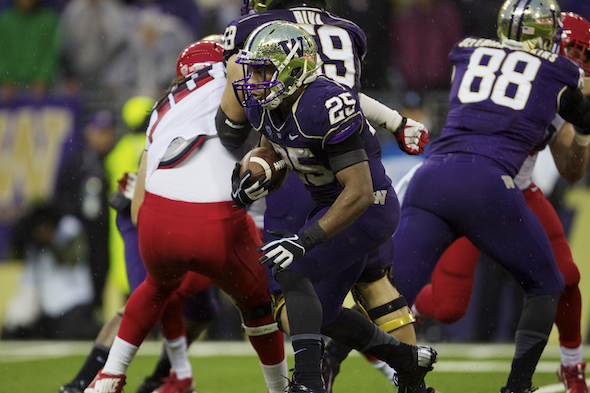 With Cyler Miles filling in capably for injured quarterback Keith Price, Bishop Sankey busting for 179 yards and three touchdowns, and Washington’s defense smothering Sean Mannion and Oregon State’s passing attack, the Huskies overwhelmed the Beavers 69-27 Saturday night, their first victory in Corvallis in 10 years. The win was also Washington’s (7-4) first in conference play on the road this season.

The 69 points were not only the most by Washington this season (previous, 59 vs. Colorado), but the most by a Husky team since a 72-0 win over California in 1915. Washington had seven rushing touchdowns and also produced three 100-yard rushers for just the second time in school history.

UW coach Steve Sarkisian started Miles at quarterback and sit Price, who injured his (right) throwing shoulder in the first half last week at UCLA. Miles made a strong case for becoming Washington’s starter next season, running an efficient, mistake-free game while completing 15 of 24 for 162 yards and a touchdown.

But Sankey dominated the show, although he only had to play little more than a half to do so. He ran for 158 of his 179 yards in the first two quarters, increasing his season total to 1,575, and could easily have topped 200 — maybe even 300 — for the fourth time this season if the Huskies needed his services in the second half. Sankey’s three TDs brought his season total to 17 and career total to 34, tying Napoleon Kaufman’s school record.

Washington’s defense had its best game of the year, sacking Mannion three times and intercepting him three times, twice by Marcus Peters, who also recovered a fumble, and once by Shaq Thompson.

Washington so thoroughly dominated, amassing 692 yards — 530 rushing, second-most in school history — to Oregon State’s 414, that reserve running back Deontae Cooper, who had three major knee surgeries during his time at UW, rushed for 166 yards and scored twice. He set up his first TD with a 68-yard run and his second with a 66-yard bolt.

Dwayne Washington replaced Cooper and added 141 yards, including a 71-yard TD romp. The only other time Washington had three 100-yard rushers in the same game was in 1996 against San Jose State when Corey Dillion had 222, Terry Hollimon 148 and Maurice Shaw 100. That was also the contest in which UW set a single-game rushing mark with 559 yards.

After John Ross returned the opening kickoff 62 yards, Miles and Sankey (16 yards) collaborated for 23 yards on the ground, Sankey scoring from three yards, to give Washington a 7-0 lead.

After the Huskies held the Beavers to a 3-and-out, the Huskies went three plays in 60 yards for a 14-0 lead. Sankey gained 19 to the OSU 40, Miles hit Kevin Smith for 35 yards to the Beavers’ four-yard line, thenSankey bolted in.

Travis Coons hit a 44-yard field goal on the third possession for a 17-0 lead. By the end of that drive, Washington had 141 yards to Oregon State’s seven.

Early in the second quarter, Peters picked off Mannion and returned it to the OSU 21, setting up a Coons 24-yard field goal. Miles then threw a 28-yard touchdown pass to Smith, who made a leaping. sliding grab in the back of the end zone, for a 27-0 lead.

Cooper increased the lead to 41-0 with a two-yard run late in the third quarter after he set up his own score with a 68-yard run, his longest as a Husky. Thompson then returned Mannion’s third interception 80 yards for a TD and a 48-0 Husky lead.

After Mannion’s TD to Cooks made it 48-6, Cooper scored his second TD for a 55-6 lead. Washington made it 62-6 with a 32-yard run by Washington. Victor Bolden’s 98-yard kickoff return restored a little dignity for OSU, but Washington’s 71-yarder made it 69-13.