O-line keeps Halliday clean, and he throws for 488 yards and no picks as Washington State holds off Utah 49-37 Saturday in Pullman to set up an Apple Cup with meaning. 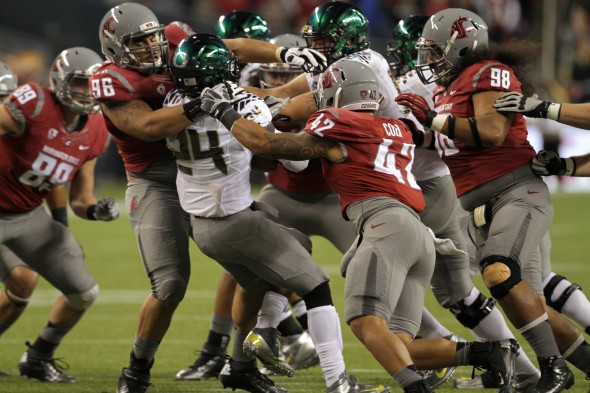 The Cougars made strides from a year ago, here against Oregon, to make themselves bowl eligible Saturday in Pullma . Drew Sellers, Sportspress Northwest file

PULLMAN – Mike Leach was so disgusted last season by the lame performance of Washington State’s offensive linemen at Utah that he ordered all five starters to talk to the media.

One year later, those linemen have yet to disclose what was more humiliating: Losing 49-6 to Utah, or being forced to talk to low-life sports writers.

Offensive linemen are rarely interviewed, of course. They trudge along in the trenches, waging war with other humongous humans while the pretty boys – the quarterbacks, running backs and wide receivers – collect all the headlines and, it often seems, all the coeds.

Ladies of Wazzu, listen up: Grab an offensive lineman while you can. The demand is bound to go up after the Cougars held the Utah Utes – the national leaders in quarterback sacks coming into the day – without a single sack in a milestone victory that caused fans to storm the field Saturday afternoon at Martin Stadium.

“Leach did mention it to us,” center Elliott Bosch said. “He was proud of us. That’s good to hear from the big man.”

Two other words sounded even better to Bosch on Saturday: Bowl-eligible. Six wins does the trick, and the Cougars improved to 6-5 (4-4 Pac-12) after downing Utah 49-37 on a gorgeous, chilly day on the Palouse.

WSU fans can be excused for pouring out of the stands to celebrate with their sweat-stained heroes after a triumph over a team with a 1-7 record in the Pac-12. The Cougars have won six games overall, four conference games and two straight conference games for the first time since 2006.

Will the Cougars end 10 years of bowl-less-ness?

Fullington, who grew up a Washington Huskies fan in a purple-tinted family in Belfair, was referring to Friday’s Apple Cup showdown at Washington (12:30 p.m., FOX). Seven wins guarantees a spot in one of the 35 bowl games that include (blush) 70 of the 123 Football Bowl Subdivision teams.

The Cougars, for all the misery endured in recent years, are looking for their sixth victory in the past 10 Apple Cups. Running back Marcus Mason is counting on it.

The Cougars, left for dead by many of their faithful after giving up more than 50 points and 550 yards in three consecutive losses, won two since then. Their 578 total yards against Utah was a season high, and FBS interceptions leader Connor Halliday passed for 488 yards and four touchdowns and did not throw a pick for the first time in 17 career starts.

An NFL guy? A few weeks ago, more than a few WSU fans questioned Halliday’s ability to guide a junior high team to victory.

With the Cougars adorned in Sacajawea Junior High T-shirts that Leach thought “would keep them focused” (Leach moved the start of WSU’s fall camp to Sacajawea’s, uh, semi-primitive fields in nearby Lewiston), Halliday played splendidly behind an air-tight offensive line.

“Give all the credit to the O-line,” Halliday said.

Nah. The quarterback’s gotta get some love, too.

The latter comment applied to the Cougars as a whole. The Utes (4-7), fighting an ultimately futile battle to remain bowl eligible, refused to fold, even after falling behind 21-0 after inexperienced quarterback Andrew Schulz – filling in for injured starter Travis Wilson – threw two pick-sixes barely a minute apart midway through the first quarter.

Asked if last year’s Cougars would have won a game like this in which the opposition kept coming at them, Leach responded, “I doubt it.” Fullington did not argue.

“I’m going to have to agree with him,” Fullington said with a smile. “He’s a pretty smart guy.

“We’ve just grown tremendously from last year, obviously. It shows on the field and in the locker room.”

Much of WSU’s improvement can be traced to the offensive line. Last year, WSU led the nation with 57 quarterback sacks allowed. This season, they’ve allowed 22 sacks, even though the Cougars broke their year-old school and Pac-12 record of 624 pass attempts in a season Saturday.

Leach said WSU’s offensive line has “probably” improved more in one year than any other position group he’s seen in more than two decades of coaching college football. Bosch, taking his cue from Fullington, did not argue with the coach.

“We are playing well as a group,” Bosch said. “We can always play better, and I think we haven’t played our best game yet.”

The Cougars would love to spring their best game on the Huskies. Saturday marked the first time WSU fans stormed the field since last year’s home finale, when the Cougars came from 18 back in the fourth quarter to shock Washington, 31-28, in overtime. It was Senior Day, just as it was Saturday.

“We just need to have Senior Night every night,” Leach reasoned.

Don’t get Cougars fans all riled up again about all those night games, coach. Leach can be forgiven for losing track of time after Washington State and Utah combined for 86 points, 98 passes and 1,059 yards Saturday afternoon in a 4 hour, 18-minute slugfest.

“Their skill on offense absolutely throttled our skill on defense,” Whittingham said.

Chances are that Whittingham will be even more impressed with WSU’s offense when he watches the game tape. Halliday just missed on any number of passes, many of them of the lengthy variety. He easily could have shattered his own Pac-12 record of 557 passing yards, set last month at Oregon.

“It would have been something to see,” Halliday said.

Perhaps Husky Stadium patrons will see a record effort from Halliday. The Cougars promise to stay focused on the Huskies, because a bowl is likely but not a certainty.