After big win, Sarkisian’s job appears to be safe

A ground game of 530 yards led to a record Washington win over the Beavers in Corvallis and quieted both the OSU crowd and some of Sarkisian’s critics back in Seattle. 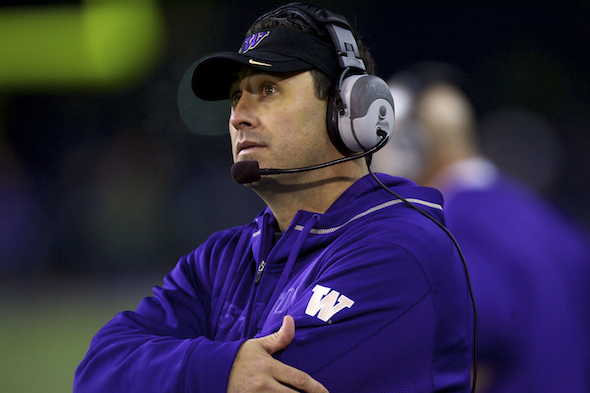 The case for burying Steve Sarkisian’s coaching career had a setback Saturday night in Corvallis. Borrowing a line from a Monty Python movie  — “I’m not dead yet!” – Sarkisian found the valve the Huskies’ adrenal gland and opened it fully for an astonishing 69-27 victory over Oregon State, their first conference road win of the season.

“It was great for our psyche,” Sarkisian told KJR radio. “The team really hasn’t wavered. We just had to play without the self-inflicted wounds of penalties and turnovers. I’m proud of the guys showing a sense of belief in one another and the system.

“They responded well (to the UCLA loss). We had a practice Thursday with an energy I hadn’t hadn’t seen in quite some time. We challenged them — we wanted the same thing Saturday.”

They delivered, in a rebound game rich with milestones. Fired up from the moment they took the Reser Stadium field, the Huskies scored 17 points on their first three possessions to put away the game and silence not only the Beavers’ crowd but the critics in Seattle that had a field day after Washington’s desultory 41-31 loss at UCLA a week ago Friday.

Going with redshirt freshman quarterback Cyler Miles in his first career start over injured Keith Price, Sarkisian offered up a simpler game plan that relied on Bishop Sankey, who had 179 yards — 128 in the first quarter — and three touchdowns, leading UW’s first win after nine Willamette Valley losses in a row to OSU and Oregon.

The 69 points were the most in the modern, post-World War II era, eclipsing the 66 against Oregon in 1974.

As the listless Beavers (6-5, 4-4) mostly stared instead of tackled, reserve running backs Deontae Cooper and Dwayne Washington nearly caught up to Sankey in the second half. Cooper, who has had three surgeries to repair ACL tears in his Washington career, had 166 yards in 11 carries and 2 TDs. Washington also had 11 carries and 2 TDs, getting 141 yards.

Cooper had runs of 70 and 68 yards that showed his speed has almost completely returned.

“Tuesday in practice, where we tried to keep Sankey out to limit his practice carries, Coop popped in and really was running,” Sarkisian said. “Were saying ‘Jeez, he’s ready, he’s getting close.’ His practice habits have improved, and he ran hard as well as fast.”

Sarkisian even managed to get his foul-prone students to color mostly within the lines – only four penalties for 43 yards, about half their nation-leading average in misdeeds.

He also decided to sit his favorite player, Price, whose shoulder wasn’t 100 percent for the game, in favor of Miles, who finished 15 for 24 with 162 yards and tossed a beautiful ball to WR Kevin Smith for a 28-yard touchdown pass in the second quarter.

“He had a presence,” Sarkisian said. “Cyler didn’t look like a guy making first start. He did a good job keeping up the tempo. That could have created some uncertainty in his first start.

“Sometimes a young player doesn’t know what real preparation is. He prepared really well this week. He had good command.”

Sarkisian wouldn’t commit to a starter for the Apple Cup Friday, except to say, “Keith is our starter, and if he’s ready to start, he’ll start.”

Whoever open, the 7-4 Huskies are set up better for the Apple Cup than it appeared after last week’s loss in Los Angeles. Washington State should be similarly enthused following their 49-37 win over Utah Saturday that made the 6-5 Cougars bowl-eligible.

In a Pac-12 Conference with seven six-game winners and seven bowl contracts, the Cougars probably need a win to assure the postseason game. The Huskies could use a victory for their first eight-win season in Sarkisian’s tenure, a modest breakthrough that should still some of his hecklers.

The home-standing Huskies have a score to settle after the 31-28 upset loss in Pullman a year ago.

“We still have a bad taste in our mouths,” he said. “When you blow an 18-point lead in the fourth quarter against the rival, you don’t forget it.”

Eleven games into the season, the Huskies remembered how to dominate a middling conference rival. They couldn’t pull it off against the top four teams, but an eighth win, this one over the improving Cougs, might cause some of the purples to put down their pitchforks and torches for another year.