Thurmond was starting for an injured Brandon Browner, making his pending suspension by the NFL an even harder hit to the roster — and to the Seahawks’ national image. 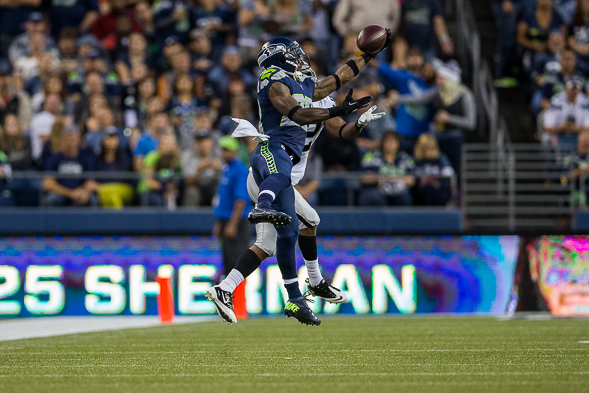 When teams develop national profiles with success, their habits, quirks and misdeeds also go national. It’s the snarky side of having the best record in the NFL. Walter Thurmond now adds to the nickname legacy that will be part of the media feast during the postseason.

We don’t know the drug of choice, nor the circumstances, that caused the NFL to be on the verge of suspending the starting cornerback for four games — only that it isn’t a performance-enhancing drug, according to NFL.com. That likely means a street drug, the likeliest being marijuana.

If the reports from unnamed sources via the NFL’s media partners are accurate, Thurmond is going to drop his appeal of the suspension so that his suspension starts with the Saints Monday night game, which allows him to get him back for the last regular-season game and the playoffs. It’s similar to the Brandon Browner scenario a year ago when he missed the final four regular-season games for what was said to be use of Adderall, a prescription stimulant.

Browner is out again, this time for a groin-muscle tear from the Atlanta game Nov. 10 that will keep him away for four to six weeks, according to Pete Carroll. With Thurmond, Browner’s  backup, gone, that leaves the Seahawks roster with three healthy CBs — Richard Sherman, Byron Maxwell and Jeremy Lane — against the No. 2 passing offense in the NFL.

The Seahawks likely will elevate Maxwell to start. Lane would become the nickel back. They also have on the practice squad CB DeShawn Shead, a free agent from Portland State signed in 2012. Scheduled to return to practice this week is CB Therald Simon, a rookie fourth-round draft pick who has sat out since spring after a foot injury.

Those aren’t great options, although Sherman had no time for such talk.

“I think we move forward strong,’’ Sherman told Fox Football Daily on Sunday. “We played like this before (in 2012). We played four games with myself, Byron Maxwell and Jeremy Lane and we won those games by a considerable amount. So I think we will be fine.

“It will be great to get him back before the playoffs and make sure he gets his feet back under him. But I think we will get past it.’’

True, but the Seahawks in 2012 were happy to be a playoff team. This year’s regular-season ambition was to have home-field advantage in the playoffs. If the season ended today, they would have it with the NFC’s best record. But the remaining schedule suddenly looks more formidable. Among the Saints (9-2), 49ers (6-4), Giants (4-7), Cardinals (7-4) and Rams (5-6), there are no cupcakes that dotted the early schedule, which graded out as the easiest by record in the NFL. There is little slack to assure home field.

So Thurmond’s absence, apparently for no reason but foolishness, is the kind of knucklehead move that grates on Carroll, even if he won’t call out a player in public. Carroll is big on creating a positive atmosphere, but that doesn’t include a drug-test outcome.

If the sequence is similar to other NFL drug busts, the test happened weeks ago. The team is likely to have known about it after Thurmond said he would appeal. So they have been plotting contingencies, which explains why Carroll has been coy about the Browner injury, avoiding putting him on the injured reserve list. That would have ended his regular season but opened a roster spot. Now they really have to hope Browner is back in late December.

Besides the roster complications, Thurmond, a four-year vet blossoming after three seasons of injuries, becomes the seventh Seahawk busted for something since 2010 — eight, if Sherman’s positive test counted, one that was overturned on a chain-of-custody failure by testers.

Just when people were forgetting LB Bruce Irvin’s bust for a PED believed to be the prescribed stimulant Adderall, Thurmond’s non-PED bust re-conjures images of a little woodsy compound run by Carroll, a native of San Francisco, that could be taken from an album cover from the 1960s. To complete the stereotype, Thurmond played at the University of Oregon in Eugene, where everyone in town is named Dude.

Doesn’t matter if the sensibilities about marijuana are changing. It is still possible for companies, governments and sports leagues to prohibit pot use as a condition of employment, often collectively bargained. The ban is probably good, if you are flying an airplane, sharpshooting a bad guy or operating on a brain.

Even if you are, say, merely defending WR Marques Colston on an out-route pass from Drew Brees, as Thurmond might have been expected to do Dec. 2 against New Orleans at the Clink, the league and the players union have agreed to say nope to dope.

Everyone knows that. Especially including Thurmond, who along with Browner, is scheduled for free agency after the season.

The road to the Super Bowl is always fraught with peril. No need to go looking for open manholes.