One notable feature about the Sounders 2014 schedule is that they will play four of their six Cascadia Cup matches (vs. Portland and Vancouver) on the road. 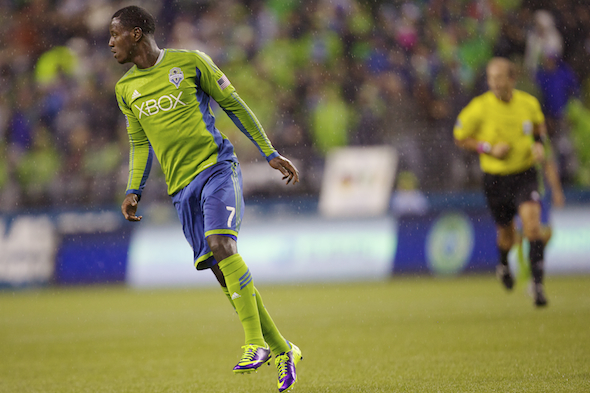 The 2014 schedule is out. The question of who will be in with the Sounders, such as Eddie Johnson, remains open. / Drew Sellers, Sportspress Northwest

The Sounders open the 2014 season March 8 hosting MLS Cup finalist Sporting Kansas City. MLS and the Sounders released Monday the 34-game schedule, which has the Sounders at the Clink for three of the first four matches. Thirteen matches will be televised nationally by ESPN or NBC.

The Sounders play their first Cascadia Cup match at Portland April 5 and have four of six derby matches on the road. The first home Cascadia Cup match is against the Timbers July 13. Seattle will host the Vancouver Whitecaps Oct. 10. All games with Portland will be nationally televised.

Two matches will be televised over-the-air on NBC when the team visits the New York Red Bulls Sept. 20 and hosts the LA Galaxy in the regular-season finale Oct. 25. Seattle will play Los Angeles in the final two games of the regular season.

The Sounders will play the San Jose Earthquakes Aug. 2 in the first event at the new Levi’s Stadium in Santa Clara, CA.

Eleven of the 17 home matches are on Saturdays. Seattle will also play two games each on Sunday, Wednesday and Friday. MLS will take a two-week break from June 12 to June 24 for the group phase of the 2014 FIFA World Cup in Brazil.

The first road trip will take the Sounders to Montreal March 22. Seattle has a three-game road trip from April 5 to April 19 and a four-game trip from June 11 to July 5. There will be five consecutive nationally televised matches from July 13 to Aug. 16.