PULLMAN — The Apple Cup makes its biennial pit stop at Husky Stadium Friday afternoon, a cause for celebration by college football fans from Palm Springs to Napa Valley and points beyond in California. Welcome to the California High School … 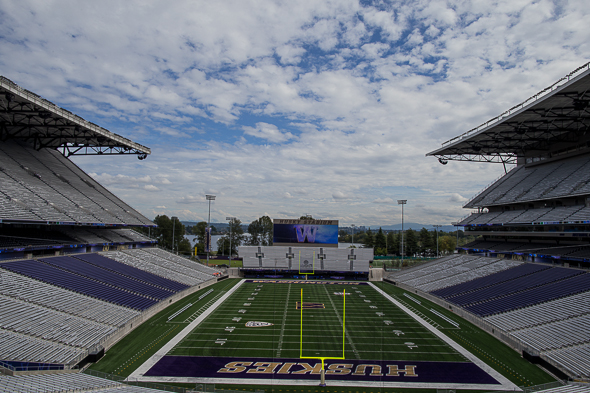 PULLMAN — The Apple Cup makes its biennial pit stop at Husky Stadium Friday afternoon, a cause for celebration by college football fans from Palm Springs to Napa Valley and points beyond in California.

Welcome to the California High School Alumni All-Star Game. When the Cougars and Huskies work off poundage gained via Thanksgiving grubfests, the vast majority of starters and others on the two-deep will be California natives.

The migration of Californians to soggy Seattle and snowy Pullman in pursuit of gridiron glory has a long and storied tradition. However strange that may seem to outsiders from, say, California.

Former WSU coach Mike Price liked to say, “Your heart has to come from Washington, but your arms and legs have to come from California.”

Sure enough, the Cougars’ seven leading receivers, top two running backs and all kick returners hail from California, as well as three of the top four defensive backs much of the season. On Friday, Californians will account for about half the starters for WSU and perhaps 14 for Washington. The Huskies have been starting eight Californians on defense, if you’re scoring at home.

Or, as ESPN’s Keith Olbermann says, even if you’re home alone.

Interestingly, the nation’s third-leading rusher (Washington’s Bishop Sankey) and third-leading passer (Washington State’s Connor Halliday) played their high school ball in Spokane. Of course, the crime rate in Spokane has soared so high of late that many residents now refer to their city as “SpoCompton,” a none-too-kind reference to crime-ridden Compton, CA.

Even the head coaches of the Apple Cup teams were born in California, attended college in the state and began their coaching careers there. However, WSU coach Mike Leach grew up in Wyoming and first attended college in Utah, and that only begins to explain the differences between Leach and Huskies coach Steve Sarkisian.

Come to think of it, Leach doesn’t share a whole lot of similarities with virtually anyone in the coaching profession or any other line of work. He is a book author and a lover of pirates, a former college rugby player who earned a law degree, then decided he’d rather argue with referees than judges. His first coaching job paid him $3,000 a year, much to his in-laws’ chagrin.

“I don’t think they were real fired up,” Leach says in the semi-drawl he apparently picked up when coaching at Texas Tech. “They thought their daughter had married an attorney. We’d been broke for a while, and I think it made it pretty apparent we were going to be broke longer.”

Leach’s messy exit from Texas Tech has been well-chronicled, but he was greeted as a messiah in Pullman when introduced at a standing-room-only press conference two years ago. The Cougars were desperate to field a winning football team, which explains why they agreed to pay Leach $2.25 million a year after paying his predecessor, Paul Wulff, a mere $600,000.

Alas, Leach soon became as popular as Obamacare with more than a few disgruntled players and fans. Hordes jumped ship, turned off by the steep demands of Leach and his staff during a 3-9 first season in which a freshman-laden team struggled to grasp the nuances of new offensive and defensive schemes.

Not to mention a new way of thinking. It took Leach just one game to understand the depth of  the mental toll taken on players who had lost, lost and lost some more – often by embarrassing margins – throughout their WSU careers.

“We’ve got to be a mentally tougher team,” Leach said after losing 30-6 at BYU in his Cougars debut. “If something negative happens, we can’t have all these basset-hound-looking faces on the sidelines.”

More calls for Leach’s head were heard just a few weeks ago, when the Cougars accomplished the rare feat of giving up more than 550 yards in five consecutive games – and more than 50 points in four of those games (all losses). Since then, the Cougars have won two in a row, but they have yet to win back some fans.

Barely 23,000 turned out for Senior Day Saturday on a crisp, gorgeous afternoon that was a postcard for college football. Crimson-oozing types beg to point out that most students had left isolated li’l Pullman, since classes are not held during Thanksgiving week.

Hmm. OK. Whatever. Please wake the dead by rendering that lame excuse the next time only 23,000 turn out for a college football game in other small, isolated towns like State College, Pa., Auburn, Ala., and Starkville, Miss.

Thus, the rebuilding of WSU’s fan base – which has never been overwhelming by virtually anyone’s standards (re: shockingly few sellouts in the history of the Pac-12’s tiniest football stadium) – runs side by side with the rebuilding of the football program. In both cases, it will take time.

The Cougars sped up the clock by becoming bowl eligible last week. Win Friday at Washington, and the Cougars are assured of their first winning season and bowl appearance in 10 long, painful years.

The front-running faithful will hail Leach as a savior if he beats the hated Huskies, but it will not be easy. The Cougars are two-touchdown underdogs to the Dawgs. Washington State was thumped 52-24 at home last month by the same Oregon State team that got boat-raced last week to the tune of 69-27 by a Washington squad playing on the road without its star quarterback.

Of course, anything can happen in the Apple Cup. It was only last year that the Cougars avoided an 0-9 conference season by rallying from 18 down in the final quarter of their final game to shock the Huskies in overtime.

Leach says that win “accelerated” the rebuilding process in Pullman by providing players with concrete proof that hard, grueling, time-consuming work does have its rewards. Halliday, for one, is determined to earn more rewards while playing in his first Apple Cup.

“I’m really excited to kind of lose my virginity to that,” Halliday said.

Should be interesting. After all, 72,000 people will be watching.