in the three years since Bishop Sankey spurned Washington State for the Huskies, fan backlash has died down. The memory, however, rekindles Friday. 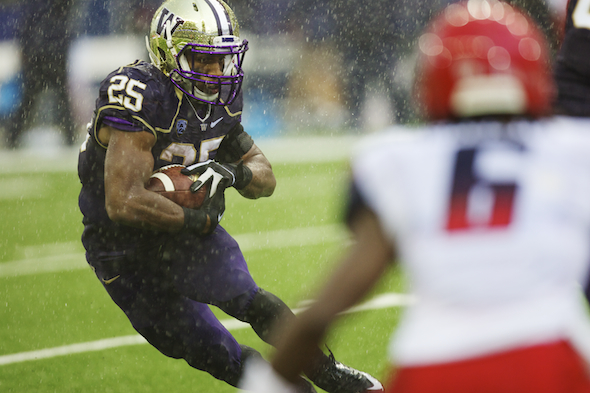 When Washington State’s Andrew Furney knocked through a 27-yard field goal in overtime to win the 2012 Apple Cup, WSU students hopped the guardrails and poured onto the field, engulfing players and coaches along the WSU sideline.

Washington running back Bishop Sankey was the first to dash through Martin Stadium’s exit tunnel.

“It was like he was going into the lion’s den. He boogeyed straight to the locker room,” his father, Chris Sankey said Tuesday.

The question surfaces each year in the week leading up to the cross-state rivalry game, around tailgates, from WSU fans feeling spurned.

Why didn’t Bishop become a Coug?

Starring first as a running back, later as a senior wildcat quarterback at Spokane’s Gonzaga Prep, Sankey verbally committed to WSU coach Paul Wulff in 2009. Slightly undersized at five-foot-10, Sankey saw that the Cougars were the first in line to make him a scholarship offer. His acceptance appeared monumental for a program coming off a two-win season.

“We were home over Christmas break and we decided, ‘Hey, why don’t we go for it?'” Chris Sankey said. “That’s why he committed so early. We thought it would be a good fit. I always knew wherever Bishop went, he would do great at. I was thinking he would be a part of bringing Washington State back up to prominence.”

“We just had a really, really good relationship as far as recruitment,” Bishop Sankey said last week inside Husky Stadium. “I felt (coach Thomas) was really genuine and kept it real with me.”

Two weeks before signing day in 2011, Sankey took his official visit to Seattle. Rumors percolated about the biggest recruiting reversal ever between the rival schools. Most WSU fans knew the switch was coming.

“I just told him that I wanted to be a Husky,” Sankey said, recalling his meeting in Sarkisian’s office. “I think I said it in a calm demeanor. Coach Sark was like, ‘What was that again? Say that again. Are you going to say that like I’m another coach from the other team, or are you going to say it like I’m the coach for the Huskies?'”

“I had to say it with a little more enthusiasm.”

Each passing season, the change looked progressively smarter. As a freshman, Sankey rushed 28 times for 187 yards, then busted out as a sophomore with 1,439 rushing yards and 16 touchdowns. His junior year has played out like a dream: 1,575 rushing yards (5.8 per carry), 18 touchdowns (17 rushing, one receiving). Earlier this week he was named a Doak Walker finalist, the award given to the nation’s top running back.

Sankey is 121 yards away from Corey Dillon’s UW single-season rushing record (1,695) and needs one rushing touchdown to surpass Napoleon Kaufman for the school’s career mark for a running back (34).

“He’s going to go play hard. He’s going to keep his mouth shut. He’s going to get back in the huddle or get back in his alignment and do it again,” Sarkisian said of Sankey Monday. “I know that he’s probably got some accolades coming his way, and deservedly so. He’s a tremendous player. He probably doesn’t get enough national recognition as he really deserves.”

“There’s a lot of great players that have come from there. Bishop’s done an outstanding job. I can’t say enough about how proud we are of him,” Cozzetto said.

So if the crimson-clad in attendance Friday at Husky Stadium feel a little betrayed, or annoyed by the heaps of praise headed Bishop’s way, Chris Sankey understands.

The decision to dismiss the Cougars didn’t happen overnight.

“Don’t get me wrong — he struggled with it. It was a very, very trying decision. I told him ‘Hey, you know the decision is up to you. I didn’t want to influence him to go anywhere if he didn’t like it . . . he pondered it and prayed on it. It was up to the last minute.

“He just thought with the education and the other stuff they had, he just decided UW was the better fit.”

Which is why Chris Sankey’s tone brightened when talking about how Bishop quickly raced off the field after last year’s Apple Cup collapse. When the chaos spread to midfield, UW tight end Austin Seferian-Jenkins received a blind-sided hook from a fan storming his way to the WSU logo.

“Again, I’m just really, really happy with the decision I made.”