The immortal run by Marshawn Lynch Jan. 8, 2011, skewered the Saints, legitimized the Seahawks and layers in some juicy drama for Monday night. 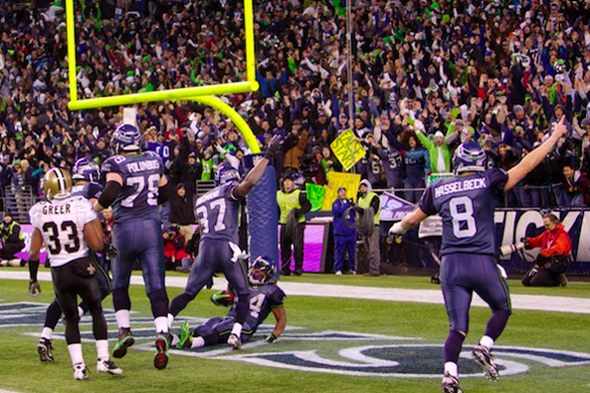 The CenturyLink crowd and most of the Seahawks offense exults in the end zone after Marshawn Lynch’s 67-yard run rocked the local world Jan. 8, 2011. / Drew Sellers, Sportspress Northwest

Joined forever at the seismometer, the New Orleans Saints and Seattle Seahawks get together again Monday night, providing a chance to revisit one of the greatest plays in the history of the NFL. The moment is among the few in pop culture of which it can be said truthfully, literally and not figuratively, that the needle was moved.

“I didn’t need to go back and watch it,” said Sean Payton, the Saints coach then — stunned — and this week — reflective.

“It was probably shown for a good month on every type of highlight film,” he said.  “It was an amazing run . . . a great example of a play that not only (was) blocked well, but for a back, who late in the game had really worn down the defense, to make a tremendous play.”

As with many where-were-you-when moments, the passage of time can confuse. Seahawks fullback Michael Robinson, who was closer to the play than Payton, disagrees with a part of Payton’s recollection.

That, we didn’t know. The other thing Robinson said (besides, “I blocked my guy”) was  what everyone who was there remembers.

Such was the pandemonium in the mid-afternoon of Jan. 8, 2011 at the Clink that the episode, reported the next day, registered earth movement on a nearby seismometer. Hence, “Beast Quake,”  one of the best nicknames in Seattle sports history.

Marshawn Lynch, a k a Beast Mode, rocked 67 yards of tectonic splendor. Payton had a firm grip on why the play was so exhilarating.

“What’s different about a play like that,” he said, “compared to a long pass, or even a return for a touchdown, (is it is) an explosive run that’s physical.”

Exactly. For 13 seconds, Lynch, at high speed, threw off a half a dozen opponents, and smited one, linebacker Tracy Porter, with a stiffarm that just missed knocking him back through time.

Seen through the lens of psychology, the play represented the virtue that adults always forget when they play the dinner-party game about about choosing a superpower. They forget the superpower they, as kids, wished they possessed: Indestructibility.

As awareness grows in a child, so does fear. Parents doing their best to protect a child from harm describe many things that are fear-inducing. In a scary world, what could be better than indestructibility?

On that play, Lynch did what we often wish we could: Elude, shed, outrun and knock down whatever we believe stands between us and the goal. The YouTube video above has had more than one million visits, a number sure to grow as the attention devoted to Monday Night Football rekindles replays of such a visceral moment.

Robinson, Lynch’s locker-room neighbor who serves as his default spokesman as he eludes interviews this season, said even Lynch recognized what happened that afternoon was much more than a single football play.

“He’s said it before – the run was symbolic of how his life has been,” Robinson said. “You get thrown by off-field issues or whatever, then you have to stiff-arm your way through.”

Less than four minutes remained in a game the Seahawks, at 7-9 un-pedigreed freeloaders in the playoffs against the defending Super Bowl champs, preposterously led 34-30. The first losing team to make the NFL playoffs was looking for a first down to help drain the clock and create one of the largest upsets in postseason history. A score by any means in the late going would have stunned the NFL. The way this one happened made it immortal.

No one in the house was more incredulous than the coach, Pete Carroll.

“I wasn’t any different than the fans on that one,” said Carroll, grinning through the retelling. “The timing of it, the impact of the play on the game, and kind of the clarity that this is now a game that we got . . . that was just an extraordinary moment on the football field. He couldn’t have been more dramatic about it pulling it off. ”

The potency of that play — not to mention Lynch’s crotch-grab as he hurtled backward over the goal line — has come to represent the swagger than steadily grows each season under Carroll. He said that the previous weekend’s 16-6 win over St. Louis, which qualified Seattle for the playoffs as NFC West champs, set the table for the buy-in of his first year as coach that arrived with the 41-36 triumph over the Saints.

“The (St. Louis) game was part of that,” he said. “We needed to learn what it was going to be like, so that we could take advantage of being at home (against New Orleans). We might (someday) have a chance to win the championship at home. We wanted to feel comfortable in that setting.

“It all fit together — trying to finish (a game) really well, that you always have a chance, you’re never out of it, and all of those kind of things. There were a lot of lessons in there  coinciding with the takeover of the new team and the culture.”

The upset of the Saints washed away the widely castigated freakishness of a losing team making the playoffs. Led by a player who made a play that legitimized a team and galvanized it to the fan base, this year’s 10-1 Seahawks, Super Bowl favorites, face the Saints for the first time since they were skewered with an exclamation point.

At 9-2, New Orleans is Seattle’s most formidable impediment to the NFC title, creating a matchup that, by records, is exceeded by only one other game in the 43-year history of Monday Night Football.

Seismologists are standing by.